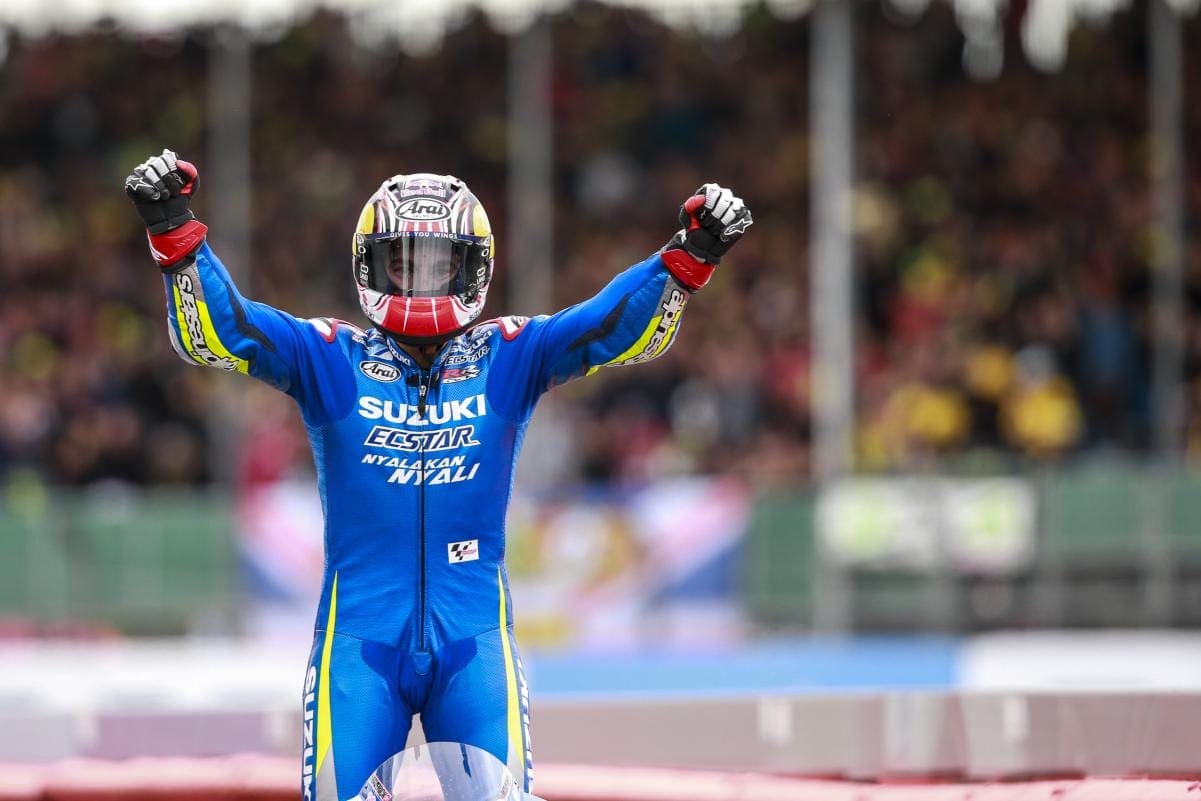 Maverick Viñales (Team Suzuki Ecstar) has taken a historic first win for Suzuki since their return to the championship, as the 2013 Moto3 world champion was in a class of his own at the Octo British Grand Prix to become the seventh winner so far in 2016. Viñales, who got his first podium in Le Mans in the French GP, got a front row start and simply pulled away once clear at the front – putting in an incredible performance to cross the line over 3 seconds clear. After an almighty battle behind, it was home hero and pole sitter Cal Crutchlow (LCR Honda) and Valentino Rossi (Movistar Yamaha MotoGP) who completed the podium.

Speaking after the race, the Suzuki man said: “It feels incredible, for what I’ve fought for all the time to come true…you know to have a race like that where all the time I could manage the gap… the lap times were so good. The team has worked so much and I’m so grateful to them. I came into the weekend thinking I could win because I’ve always been so great at Silverstone, and my bike was on a really good level.

“We did a lot of laps on the hard tyre and worked so hard. For us the restart was difficult because a lot of people put on a new tyre but we kept the same one. The key was yesterday in the rain because they gave me a bike to be able to be on the front row. Today, we did it. This is a dream come true and I hope I can give Suzuki more things like this!” 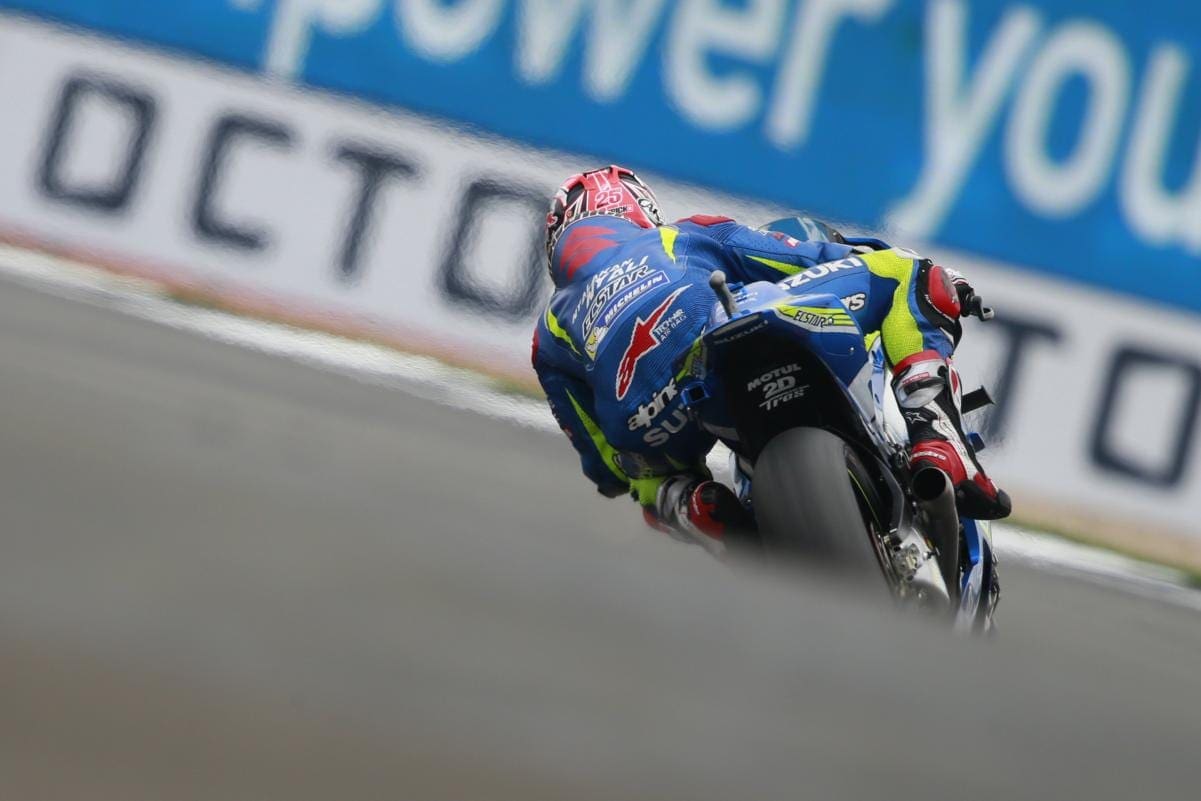 There was Lap 1 drama as the Octo British Grand Prix got underway, with rain threatening the grid and bike swaps practiced in morning Warm Up, but the weather remained dry for the length of the race. With the initial lights out it was Maverick Viñales at the front, before an incident between Loris Baz (Avintia Racing) and Pol Espargaro (Monster Yamaha tech 3) brought out the red flag and the two riders went to the medical center. On the restart, the front row of the grid of Crutchlow, Rossi and Viñales fought for the lead, with Crutchlow taking the position early before Viñales got through to lead and pull away.

With Viñales away at the front once again, Marc Marquez (Repsol Honda Team) led a five bike train of Rossi, Crutchlow, Andrea Iannone (Ducati Team) and Marquez’ teammate Dani Pedrosa in the chase, with reigning champion Jorge Lorenzo (Movistar Yamaha MotoGP) having a difficult race as he circulated in P8 despite his stunning record at the British venue. With Rossi then taking over in P2, Viñales was still over two seconds clear and the chase was on.

Iannone, after making his way to the front of the chasing group, then lost his Ducati with 6 laps to go and suffered a DNF, leaving Crutchlow in P2 and Rossi and Marquez to duel it out. With the Italian and the Spaniard the two men at the top of the championship – although Marquez 53 points clear – it was a battle royale for points, pride and supremacy as the two fought it out. With characteristic hard racing and some incredible moves from each, Marquez eventually broke away from his Italian title rival to close on Crutchlow – before running deep and dropping back behind teammate Pedrosa into P5, into another battle that he just won to come home P4. Pedrosa had a calmer ride than his teammate to the top five, but looked to have made an incredible leap forward in the setup of his Repsol Honda as he got back to the front. 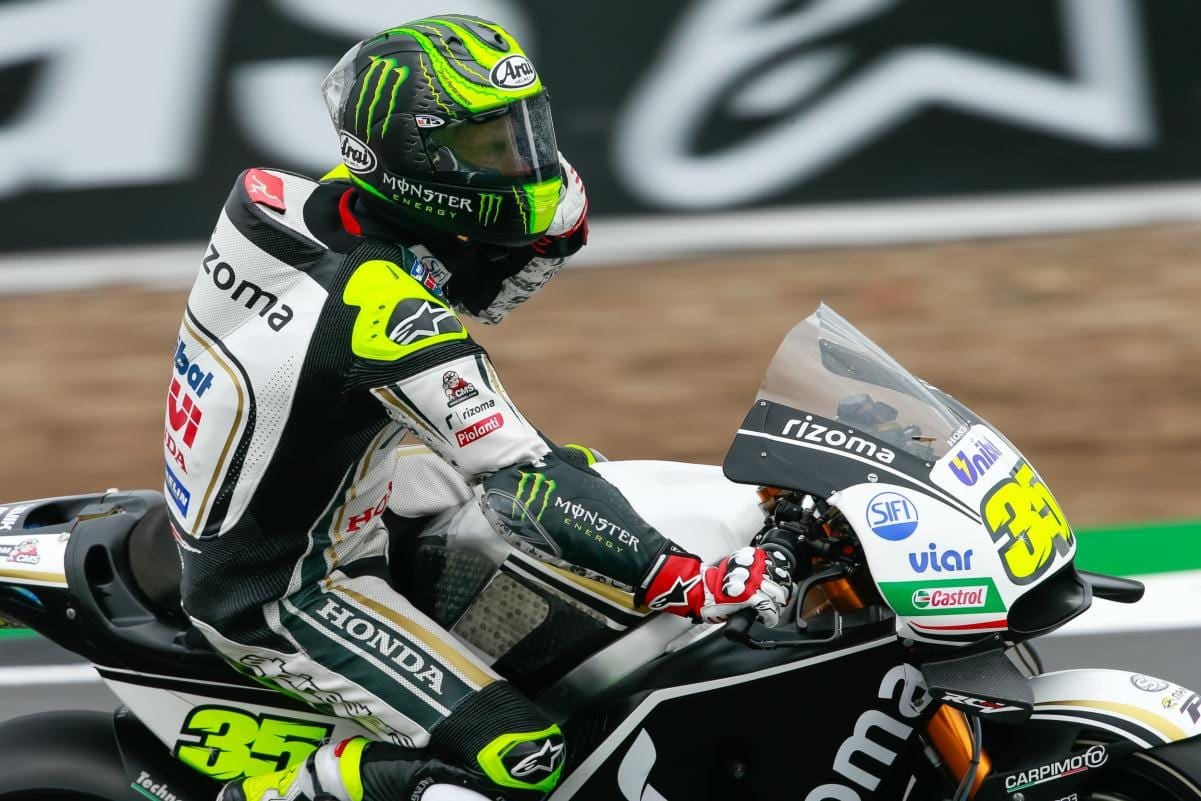 Andrea Dovizioso (Ducati Team) came home P6 in a solid ride despite having twisted his knee in a testing crash ahead of the event, with Aleix Espargaro on the second Team Suzuki Ecstar similarly riding after a recent injury to come home P7. Jorge Lorenzo crossed the line eighth after struggling for grip, with Danilo Petrucci (Octo Pramac Yakhnich) and Alvaro Bautista (Aprilia Racing Team Gresini) completing the top ten. Home hero Scott Redding (Octo Pramac Yakhnich) was the last to cross the line after a crash, with compatriot and replacement rider Alex Lowes coming home in P13 on the Monster Yamaha Tech 3 in a solid first MotoGP performance.