Video: Spy footage of Suzuki’s 2017 mini-Superbike out testing on the road!

Here’s our best look yet at the 2017 mini-GSX-R out in final road-going tests in Indonesia.

We’ve been bringing you the details on this tiny superbike for months now and at last the bike’s been bagged on the move. You see the most of the bike from around 1m 30s in.

The bike filmed is a 150cc version of the bike that is going to go on to spawn a 250cc option. Rather than it being an update on a model that’s already in the Suzuki range, this bike is the start of a new line of small bikes from Suzuki that have been given a more sporty ability. 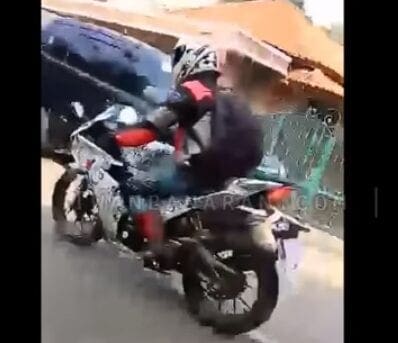 The small bike was spotted out and about during consumption tests on the public road. Suzuki has dressed the bike in camo-type white and black paint to hide the various angles of the bodywork but what’s clear to see is how sporty and compact the bike is on the move.

Expect the bike to make up part of Suzuki’s 2017 range which is expected to be revealed in final form at the Intermot show on October 4.