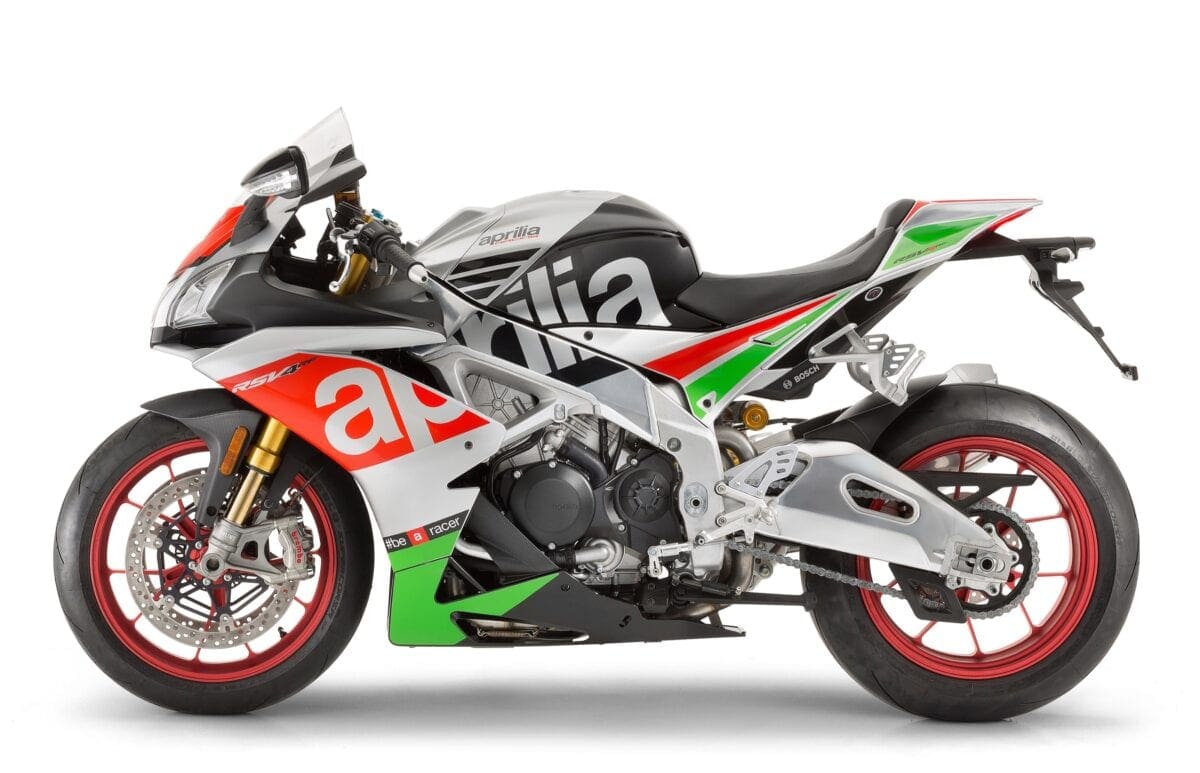 Aprilia has just unveiled the new RSV4RR and RF versions of its superbike and according to the factory the 2017 bikes are vastly improved over the current models – to the tune of a whole second a lap faster due to new suspension, electronics, brakes and a downshifter. And it gets a joystick for menu navigation. A joystick…

More than one second faster than before

Aprilia says that the primary goal it followed during development of the new Aprilia RSV4 (in both available versions, RSV4 RR and RSV4 RF) is to be the fastest superbike in the segment. In order to achieve it, Aprilia refined the RSV4’s electronics, suspension and brakes.

APRC (Aprilia Performance Ride Control) is the well known dynamic control suite derived directly from WSB. This progress was possible mainly thanks to the repositioning of the inertial platform that governs the operation, improving accurate detection of the dynamic conditions of the bike, resulting in more efficient electronic control. They shifted the ‘brain’ and now it can detect and react better to what you’re doing on the bike.

The fourth evolution of Aprilia APRC fits in with the new full Ride-by-Wire throttle which is 590 grams lighter than the current unit.

APRC, which comes as standard equipment on the Aprilia RSV4 RR and RF, includes:

In addition to the fourth generation APRC system, RSV4 RR and RF come from the factory standard with advanced multimap Cornering ABS, developed in collaboration with Bosch. The 9.1 MP system is able to optimize braking and the ABS intervention in corners thanks to a specific algorithm that constantly monitors various elements like acceleration, the pressure applied to the front brake lever, the lean, pitch and yaw angle, modulating the braking action in order to better guarantee the ratio between deceleration and stability.

The new ABS system works in unison with the Aprilia RLM (Rear Liftup Mitigation) system that limits the lift of the rear wheel during more abrupt braking. Cornering ABS, fine tuned in accordance with Aprilia’s specific indications, is adjustable to 3 levels of sensibility and can be switched off. Each of the three Cornering ABS maps can be combined with any of the three new engine maps (Sport, Track, Race), allowing riders with different experience and skill levels to find the best possible combination for their style.

The total revamping of the RSV4’s electronics management is completed by the new colour TFT instrumentation. The two selectable screen pages (Road and Race, both with night and day backlighting) correspond to as many represented indexes. Standard equipment for the RSV4 RF (and optional for the RSV4 RR), there is a new version of the V4-MP, the Aprilia multimedia platform that lets you connect your smartphone to the vehicle via Bluetooth, introducing for the first time a true corner-by-corner electronic settings calibration system with data that can subsequently be downloaded to your laptop (or displayed directly on the smartphone) for analysis, just like they do at the races.

The new V4-MP adds a new connection protocol that reduces smartphone battery consumption to a minimum, in addition to providing a larger range of circuits already mapped in which you can manage the electronic settings corner by corner, as well as user acquisition of a new circuit that is not in the list Aprilia has provided. V4-MP also includes the infotainment system, introduced by Aprilia for the first time on the new RSV4, to manage voice commands and incoming/outgoing telephone calls with your smartphone. These activities are also displayed and managed by the digital instrumentation.

The powerplant earns a new exhaust system with a silencer that has a double oxygen sensor and a built in valve. The engine ECU is new, with superior calculating capacity able to manage the rise in maximum revs, now 300rpm higher. Therefore, the engine now boasts an increased extension capacity and it was also for this reason that the variable timing intake ducts were eliminated, no longer deemed necessary. This decision contributed to reducing the weight of the fuel system parts by 500 grams. In order to increase performance and reliability, new and lighter pistons were introduced with brand new segments that reduce the blow-by effect. Furthermore, a honing treatment was added for the connecting rod heads, further reducing friction. The valve recall springs are also new to guarantee reliability during the heaviest operating loads, whereas the valves have optimized timing, capable of increasing performance and reliability. Last, but not least, the gearbox now has a linear sensor that guarantees impeccable gearshift operation.

The chassis: new brakes and suspension

The RF version of the RSV4 gets new and more sophisticated suspension with fine adjustments both in hydraulics and spring preload: the fork is a latest generation Öhlins NIX unit, as is the TTX shock absorber; the latter is operated by new progressive linkage that increases the reaction time of the shock absorber itself. There is also an adjustable steering damper, also supplied by Öhlins.

The RSV4 RR incorporates all the electronic, engine and brake tech introduced on the RSV4 RF as standard equipment, it also has features which were once exclusive to the Factory version, such as magnesium external housings, oil sump and head covers and a wide range of chassis adjustments. Aprilia RSV4 RR is available in two colour schemes, both matt, on a black and grey base (grigio Bucine and nero Ascari) with red wheel rims.

Slip-on exhaust: made by Akrapovic, this item has a carbon silencer and is approved for street use.

Complete racing exhaust: this is an exhaust system complete with headers made by Akrapovic. the muffler is in carbon.

Öhlins TTX shock absorbers (standard equipment on the RSV4 RF): the TTX line is the most prestigious of the products offered by Öhlins (top and bottom attachments are in billet aluminium). They allow full and fine adjustment in all shock absorbing functions. They can be fitted with linear sensors to install telemetry.

Öhlins steering damper (standard equipment on the RSV4 RF): the fine adjustment of this item’s hydraulics provides a front end that is always solid during the most violent acceleration.

Mirror plugs: made from billet aluminium, these are applied in place of the mirrors when using the bike on the track.

Frame guards: with an unmistakeable racing style, made of billet nylon, these are useful to prevent damage to the frame in the event of a sliding crash.

Racing rider footpegs: completely machined from billet aluminium and adjustable to 9 different positions, these pegs allow micrometric calibration of the gear shift and brake controls. They are installation ready to lodge the rear brake light switch and the inverted gear lever.

Racing semi-handlebar: made from billet aluminium, these handlebars provide an even sportier riding position.

Inverted racing gear lever: this is a mechanical element that inverts the gear shifting mode in order to improve performance on the track.

Forged rims (standard equipment on the RSV4 RF): made from aluminium with a forging process, these provide maximum resistance at a light weight, essential for increasing handling.

Aluminium racing levers: made in billet aluminium, they give the bike an even more aggressive look and reduce the weight of the factory component.

Tank bag: available in two sizes, this bag is made of technical fabric with carbon-look inserts. They are tested and approved to resist oil, fuel, UV rays and not to compromise stability even at high speeds.

V4-MP kit: (standard equipment on the RSV4 RF): this is the installation kit for the multimedia platform dedicated to the Aprilia V4 models made up of a Bluetooth control unit and all the wiring needed for installation.