Guy Martin is back on telly next Monday – cycling across the Gobi desert in China (and other things). 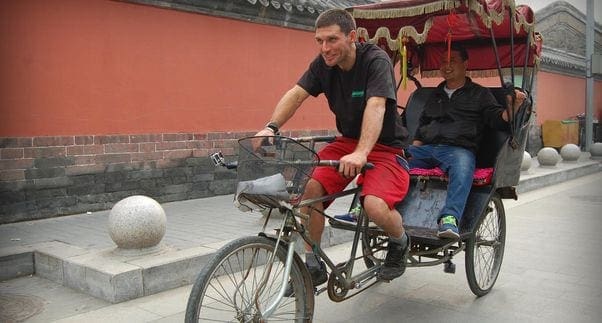 Your favourite sideburned lorry mechanic is back in action on the telly next Monday with a new three-part series; Our Guy in China.

Channel 4 (showing the series which starts next Monday evening) says that he will be ignoring the usual tourist hotspots and instead looking for extreme experiences to satisfy what he’s most interested in.

He’ll meet the families who live in a scrap yard, drink in the tea house preferred by China’s billionaires and attempt to set a new record for cycling across the longest desert highway in the world – all while trying to work around the government minders assigned to watch his every move.

In this first episode Guy will follow the trail of the Yangtze River. His adventure begins in the fastest growing city in the world – Chongqing. With a population of 30m it’s four times bigger than London, and is the largest motorcycle producing region in the world. Keen to see how this manufacturing powerhouse operates, Guy works in a factory to build his very own electric motorbike. He’s surprised by the lack of automation – everything is assembled by a skilled workforce – and realises it’s symbolic of the wider Chinese economy, where 30 years’ unprecedented growth has been sustained by a giant workforce.

After riding his new motorbike through the congested city streets, past brand new cars that are little more than counterfeit versions of Western designs and taking an improvised shortcut through a building site, he encounters the “Bang Bang Army”, a group of aging porters who rely on a simple bamboo pole and immense brute strength to haul loads around the docks. Guy is keen to lend a hand but can’t shift the 200kg load without falling over – much to the amusement of the experienced Bang Bangs.

His next stop is the world’s biggest public convenience. The Porcelain Palace is a curious result of the rush to build Western-style infrastructure. Guy’s verdict on this collection of 1000 toilets? Not worth a detour, but worth calling in if you’re passing.

Further exploration along the Yangtze sees Guy lose his trademark sideburns in a backstreet barbershop, before tasting the produce from a farm that fertilises its crops in the traditional way with human faeces. He then arrives at the pinnacle of industrial tourism, the Three Gorges Dam. The world’s biggest hydroelectric powerstation relies on a man-made reservoir that stretches the same distance as London to Edinburgh, and has moved so much water that it’s slowed the rotation of the Earth. Guy finishes his visit by joining a group of Chinese pensioners on a sight-seeing trip, marvelling with them at the dumper trucks that helped build the dam in the dam’s open air museum.

Finally, at the end of the Yangtze, Guy reaches Shanghai and the biggest shipping port in the world. Guy is amazed that a shipping container leaves here every two seconds, a fact that helps make China the world’s biggest exporter. Guy seizes the opportunity to ship his electric motorbike back to his beloved hometown of Grimsby before jumping on the high speed train to continue his journey to Beijing.