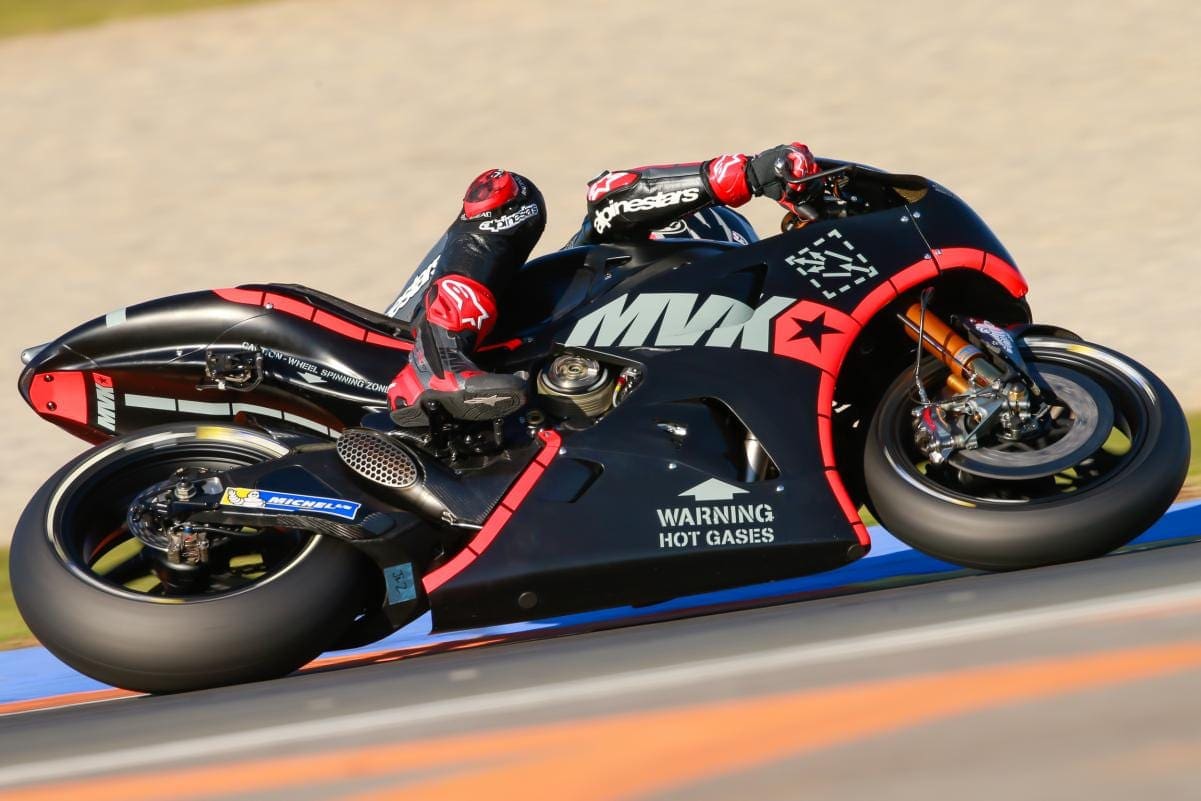 Maverick Viñales (Movistar Yamaha MotoGP – above) topped the first test day for the 2017 MotoGP season, up to speed quickly before then stealing the top spot from new teammate Valentino Rossi as the day wore on. With a 1:30.930, Viñales beat his 9-time World Champion teammate by only 0.020 on the first day, after Rossi led the timesheets for some time. The man he replaced, Jorge Lorenzo, was third quickest in his first outing with the Ducati Team – only a tenth off the top. 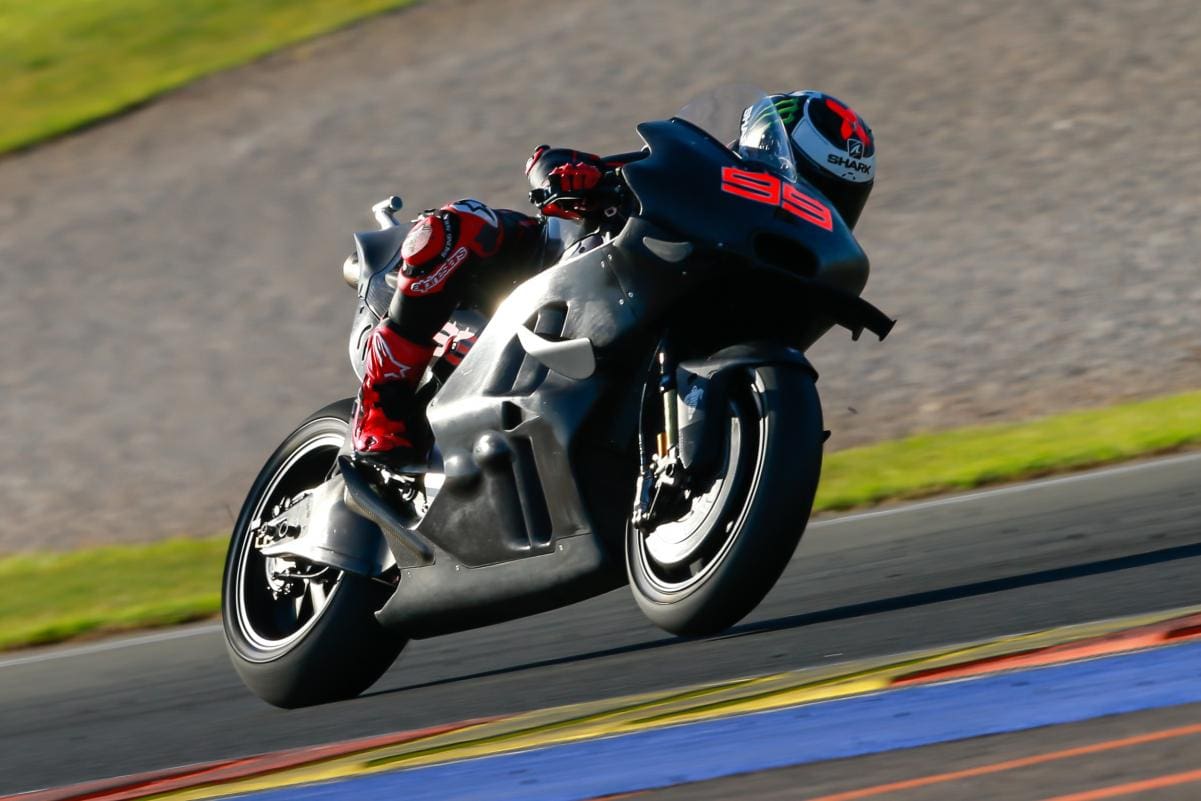 After a few laps well off the pace, Lorenzo (above) was soon up to speed; smiling and making adjustments in the pits in good company: test rider Casey Stoner. One of the biggest stories of the day had a happy first chapter, as the number 99 settled into the top ten around six tenths down – and then went for a final blast around the lengthening shadows of the circuit on the 2016 bike to go red in the first two sectors and cross the line in P3 – only 0.122s down.

New teammate Andrea Dovizioso was running the 2016 bike in full red and the 2017 in a full black testing livery, ending the day in fifth with a 1:31.31. ‘DesmoDovi’ was also one of the riders testing new front forks from Öhlins, alongside Valentino Rossi and Marc Marquez (Repsol Honda Team).

Marquez spent his first day in defence of his 2016 World Championship in P4 on the timesheets after proving an early leader in the morning. A best of 1:31.102 after 53 laps saw the reigning World Champion slot into the timesheets just 0.050s behind Ducati’s new kid on the block Lorenzo. Marquez’ teammate Dani Pedrosa also led the timesheets for a window in the middle part of the day, doing 42 laps despite his ongoing recovery from a broken collarbone and registering a best of 1:31.306 – 0.376 off Viñales’ best as the ‘Baby Samurai’ closed out the top ten.

There were a number of victims of Turn 10 on Day 1, including Rossi falling in the morning, as well as Red Bull KTM Factory racing’s Pol Espargaro and Team Suzuki Ecstar’s Andrea Iannone – with the latter walking more slowly away from the scene as he tested his back following a cracked vertebra sustained in FP1 at Misano in September; riders ok.

Iannone impressed on his first day at Suzuki, fourth for much of the day before the crash and eventually ending up P7 on the timesheets, just behind fellow crasher Cal Crutchlow (LCR Honda). 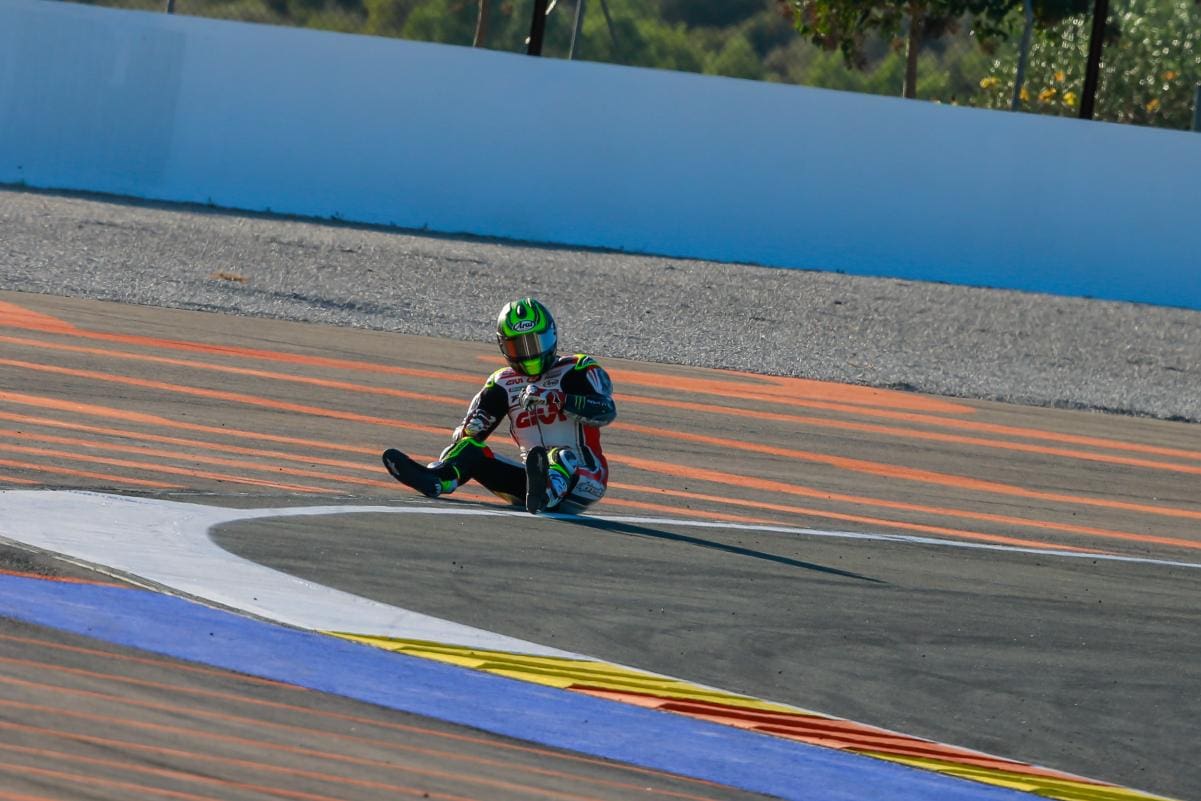 Crutchlow (above), as well as riding his LCR Honda, got a taste of a full Repsol Honda machine with LCR livery – ending the session with a best of 1:31.156 after 69 laps over the day. He also suffered a crash at Turn 14 – the same place he crashed out of the 2016 season finale; rider ok.

Compatriot Scott Redding (Octo Pramac Yakhnich) finished the day in P8 and three tenths off the pace, completing 71 laps, with teammate for the test, Michele Pirro, in P13 as he sits in for Danilo Petrucci – who has returned to Italy for family reasons and is missing the test.

Hector Barbera and Loris Baz began Avintia Racing’s 2017 with a solid performance, with Barbera in P9 and 0.020 ahead of Pedrosa – three tenths down on P1. The Spaniard was on the 2016 Ducati – the bike he raced in red when replacing Andrea Iannone for two races this season – with Baz a further second back in P15 as he looks to get back to full fitness after a tough season.

Aprilia Racing Team Gresini saw their new arrivals start to settle in. Aleix Espargaro ended the first day in fourteenth and 1.2s back from P1, after also proving a key member of the top ten for much of the first few hours of the session. Sam Lowes (below), who does have some previous experience of the Aprilia machine following in-season tests, began his MotoGP career in earnest with a slightly more difficult day. He registered a 1:33.359 as his best lap over 63, then crashed out in the last minutes of the day – but walked away unscathed. 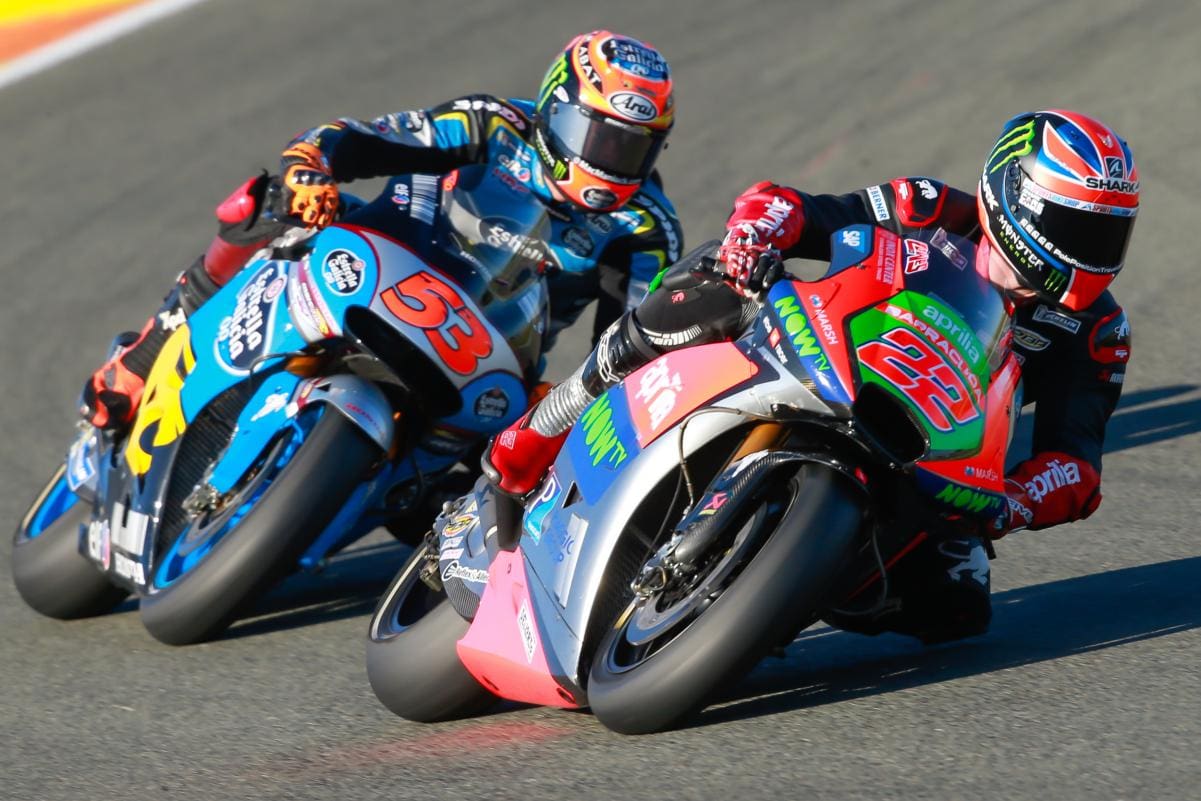 Jack Miller (Estrella Galicia 0,0 Marc VDS) was P11 in an impressive return to the track and only half a second back from the front, with teammate Tito Rabat putting in the most laps – 72 – and finishing up P18 on 1:32.578, a few tenths off his best from Q2 during the Valencia GP. Alvaro Bautista had a happy return to Aspar with the Pull&Bear sponsored team, closing out day one in P12 and seven tenths off P1 – the last man on the timesheets within a second of Viñales.

Monster Yamaha Tech 3’s new line-up, Moto2 graduates Jonas Folger and Johann Zarco, had a good first day on track as they gradually improved laptimes, down to around a second and a half off the fastest of the day by the end of their first taste of MotoGP – and both incredibly split by only 0.015 in P16 and P17.

With Iannone ending the day on a 1:31.165 in P6 on his first impressive showing for Suzuki, new teammate Alex Rins also had a good first day as the rookie chipped away at the laptime in his first experience of MotoGP. Completing 71 laps on his first day in the premier class, the white-liveried number 42 Suzuki got down into the 1:32s by 16:00, ending the day with a 1:32.811.

Red Bull KTM Factory Racing duo Pol Espargaro and Bradley Smith debuted in their new colours in P19 and P20 respectively, with Espargaro one of the fallers at Turn 10 but ending the day two tenths quicker than his recovering teammate as the pair get to grips with the switch to KTM.