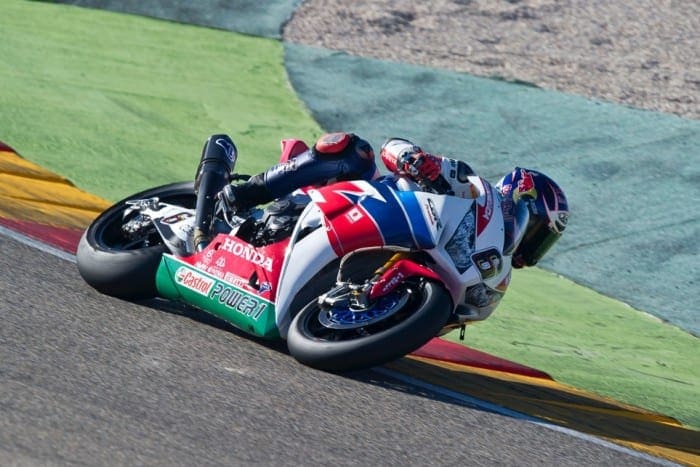 The sun shone on MotorLand Aragon as the WSB riders were eager to get out on track for Day 2 of 2017 testing yesterday.

Former MotoGP rider Stefan Bradl (Honda WorldSBK Team, pictured above) was the first rider to exit pit lane as he continued to find a strong set up with his first outing on the Honda machine. Setting a time of 1m 51.1 on the final day at a track on which he has produced some strong top five finishes at in the past, the German ended the test with a race simulation under his belt.

Kawasaki Racing Team’s Tom Sykes and Jonathan Rea began the day with a team photoshoot before taking to the track to test alterations to the chassis and engine on their ZX-10RRs. Rea went out on track as early as temperatures allowed and set the fastest time of the day – a 1m 49.8. Working mainly on chassis on Day 2 of the test, the reigning World Champion ended with a positive outcome and was able to put in some strong lap times on used race tyres.

Sykes was able to conclude his testing plan for the week, whilst clocking a time of 1m 50.4. Despite using only a harder tyre due to the track temperatures, the Yorkshireman put in a race simulation at the end of his time out on track.

Nicky Hayden (Honda WorldSBK Team) had a steady day as he continued to wait for the 2017 Fireblade, but spent the time working on brakes, suspensions and chassis. Leaving southern Spain with a better feeling from braking as well as the front end of his CBR1000RR, he was able to produce faster lap times to conclude the test; his best a 1m 50.8.

Aruba.it Racing – Ducati were able to build on modifications made on Day 1, with many short stints. Chaz Davies kept up his stunning pace at the circuit and got his lap time down to 1m 50.4, with the Panigale R now running to 85% of its full potential ahead of next week’s Jerez test.

Not wanting to do full race runs due to the cooler and unrealistic track temperatures, it was a day of building on setup for the returning Marco Melandri, who clocked a time of 1m 50.8.

Michael van der Mark (Pata Yamaha Official WorldSBK Team) suffered a crash at Turn 3 in the final hour of the day, which he was able to walk away from unhurt. Showing remarkable consistency on a new bike, the Dutchman will be looking ahead to next week’s Jerez test to build on setup, setting his fastest time of 1m 51.6.

On the other side of the garage, Alex Lowes was able to complete his testing schedule whilst clocking a time of 1m 51.3 whilst getting some serious work done with major swingarm and chassis changes.

With the first test of 2017 complete at MotorLand Aragon, World Superbike riders will be back out on track next week at the Circuito de Jerez.