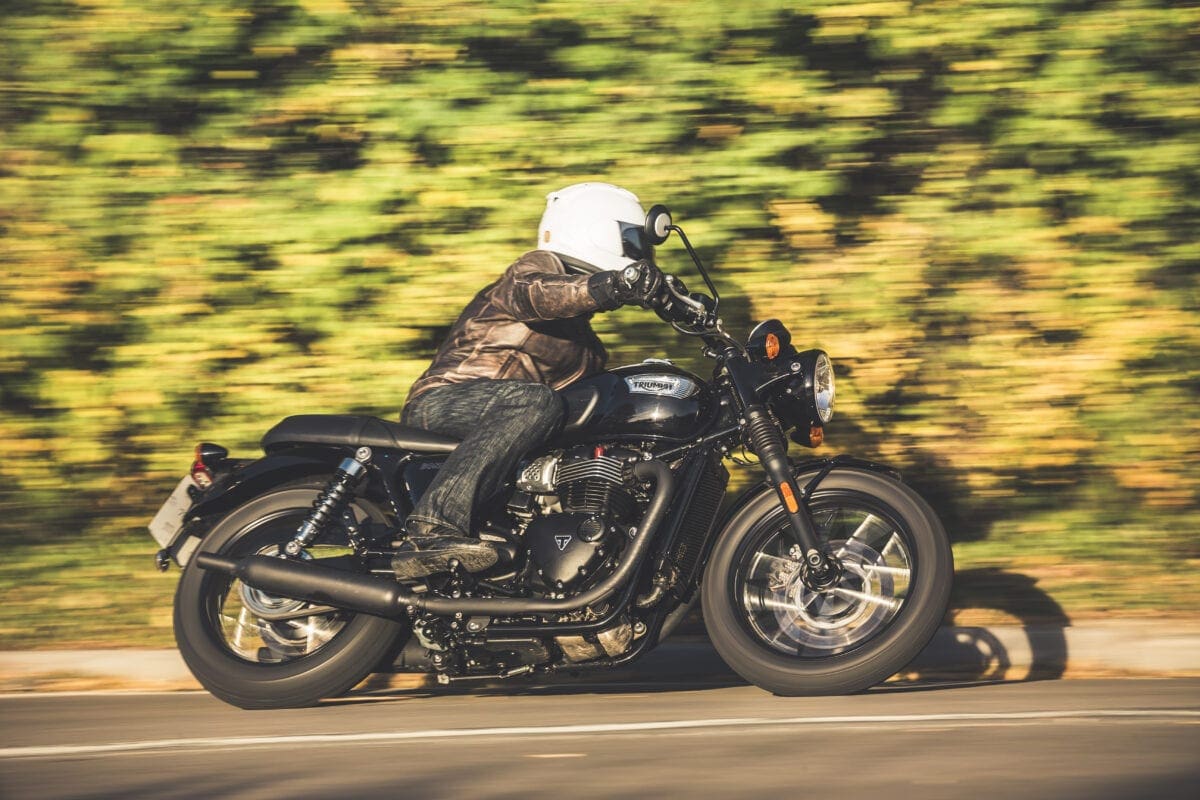 It was only a matter of time until this happened. As popular as the Bonneville range has been, what Triumph could really do with was a smaller capacity machine, one that’s suitable for new riders, even those on restricted licences. So, the T100 was a no-brainer really: take the 900cc engine from the Street Twin, drop it into the Bonneville T120 chassis, make some small adjustments to the geometry to enhance ride quality and throw in a dealer-fitted restriction kit for the A2-licence crew. And there you have it, the new Bonneville T100 was created.

The new bike is a hybrid of the Street Twin and the T120, but it has definitely inherited the classic silhouette of the latter. At a glance it looks almost identical to its big sister: duo-tone paint, spoked wheels, peashooter exhaust and the classic looks based on the 1959 Bonneville are all there. The only obvious differences are the missing pillion grab rails and the fuel injectors that haven’t been disguised as carburettors.

The exhaust system is the same clever double-skin design that Triumph used on the T120, hiding the link to the cat box and creating the illusion of a direct line from the engine to the tip of the silencer. 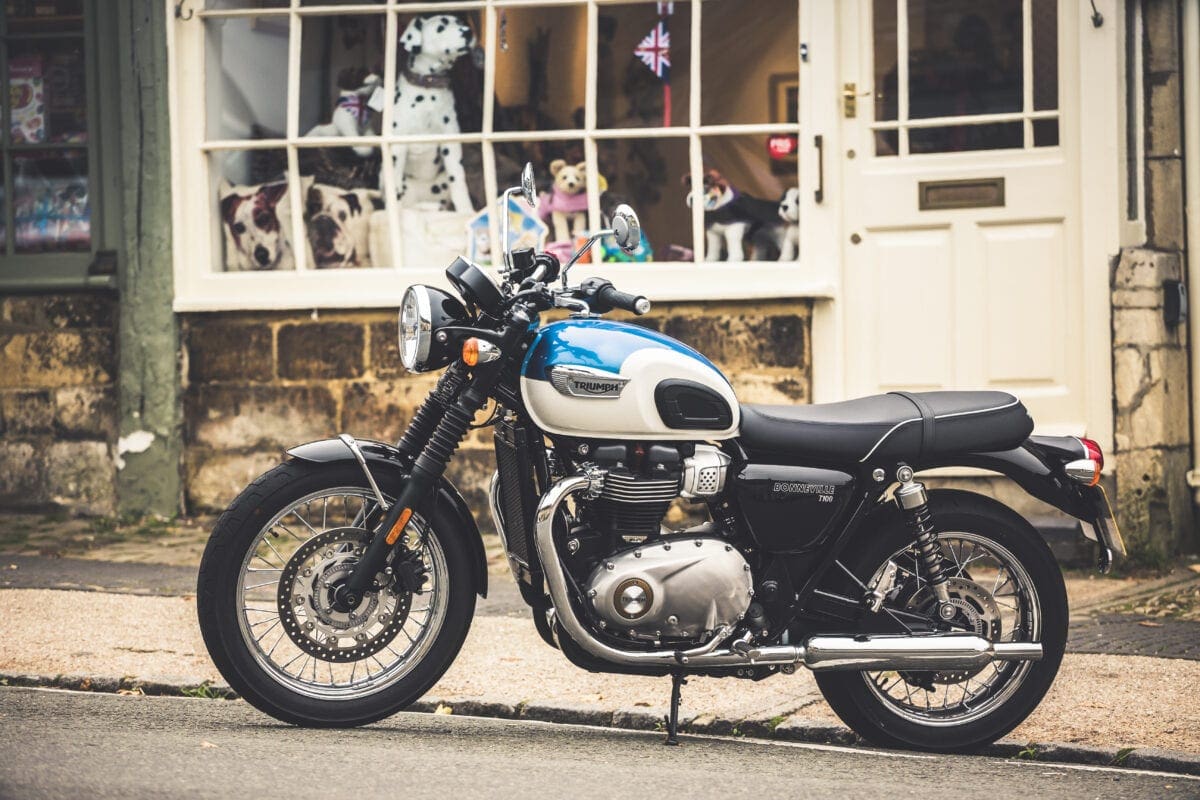 Triumph lists the T100 and T100 Black as two separate models, but the only real difference is that in the black edition the engine covers, exhaust pipes and rims are – you guessed it – black, whereas on the T100 these are stainless steel.

The instrument panel has been lifted from the Bonneville T120. The twin analogue clocks display speed and revs, with two LCD panels incorporating the odometer, gear position indicator, fuel gauge, range to empty, service indicator, clock, two trips, average and current fuel consumption, and traction control status. The dash looks nice, but the numbers on both the analogue and digital displays are quite small, which doesn’t make it easy to quickly glance at them for info. I had to take my eyes off the road for a bit longer than I would have liked to scan the dash. But you’ll probably get used to this over time, once you know exactly where everything is displayed. 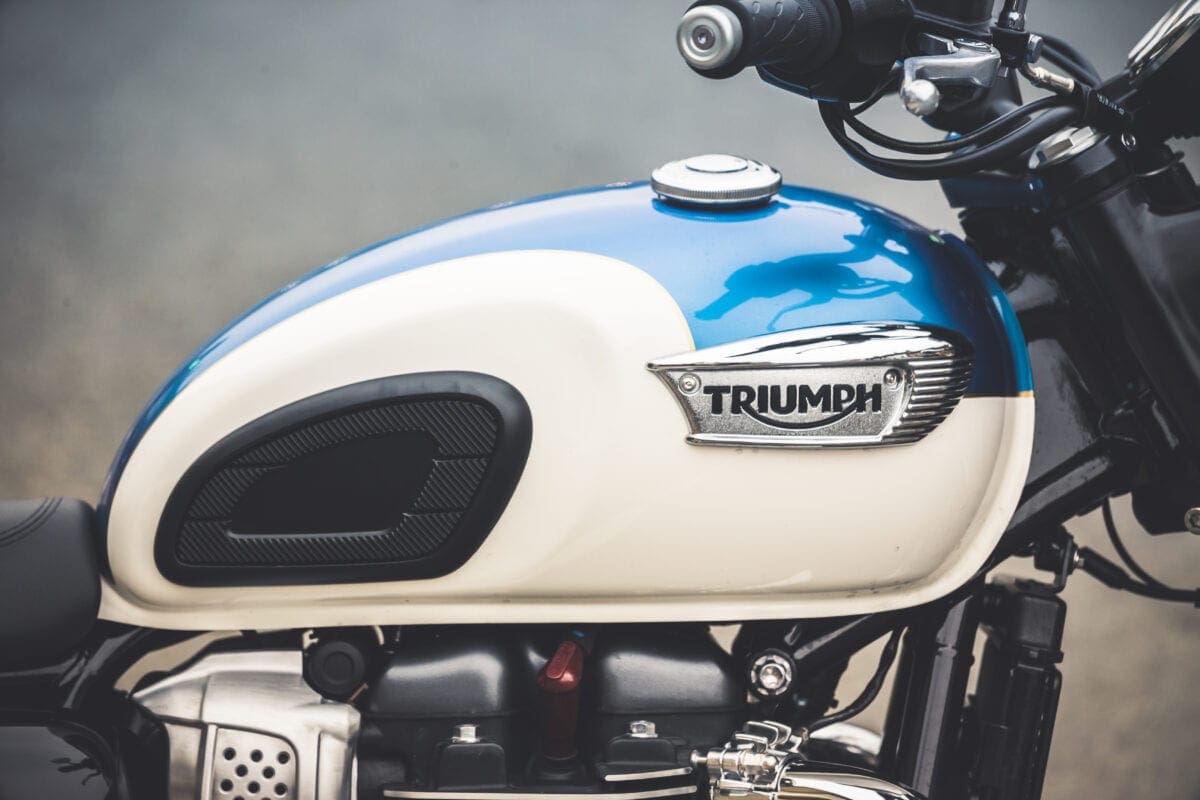 The switchgear is similar to that of the Street Twin rather than the T120, with no buttons for ride modes or heated grips (although the latter are available as extras) required. It’s basic but good quality. Jumping on the bike for the first time, it’s very easy to get to grips with the controls.

It’s all about the torque

The Bonneville T100 is powered by the 900cc liquid-cooled, eight-valve, SOHC, 270° crank angle parallel twin. I loved that engine when I tested the Street Twin a year ago, so I was curious to see how it suited the new bike.

Considering that at 213kg, the T100 is 15kg heavier than the Street Twin, I couldn’t feel any comparative lack in power. The maximum power output is relatively modest at 54bhp, but the engine is packed full of torque (80Nm at 3,230rpm, to be exact) so the T100 pulls keenly right from the lower end of the rev range, all the way to the top. The sweet spot is around 5,000rpm, but most of the time it doesn’t really matter where you are in the range, as there is always plenty of power. 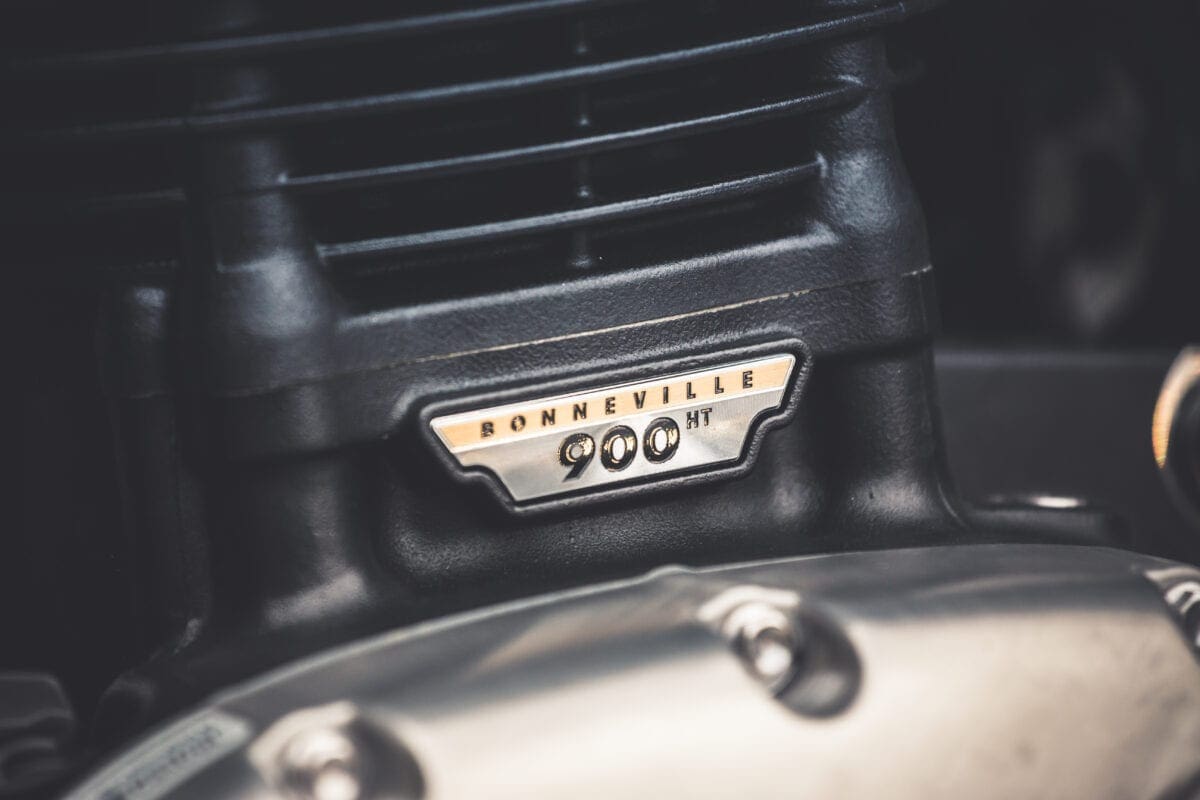 I’m not surprised that Triumph decided to re-use the 900cc engine for this bike. It delivers the power in such a smooth and non-intimidating fashion that it makes the T100 ideal for new riders, with enough poke and fun for biking veterans too.

The new Euro 4 regulations have made it tricky to restrict bikes to meet the A2-licence requirements, but to make the new Bonnie appealing to new riders, Triumph has come up with a clever way around this. The bike is only manufactured as a regular full-power version, but there’s a dealer-fitted restriction kit available. This gets Triumph nicely around both the Euro 4 stipulations and the UK licence restrictions. 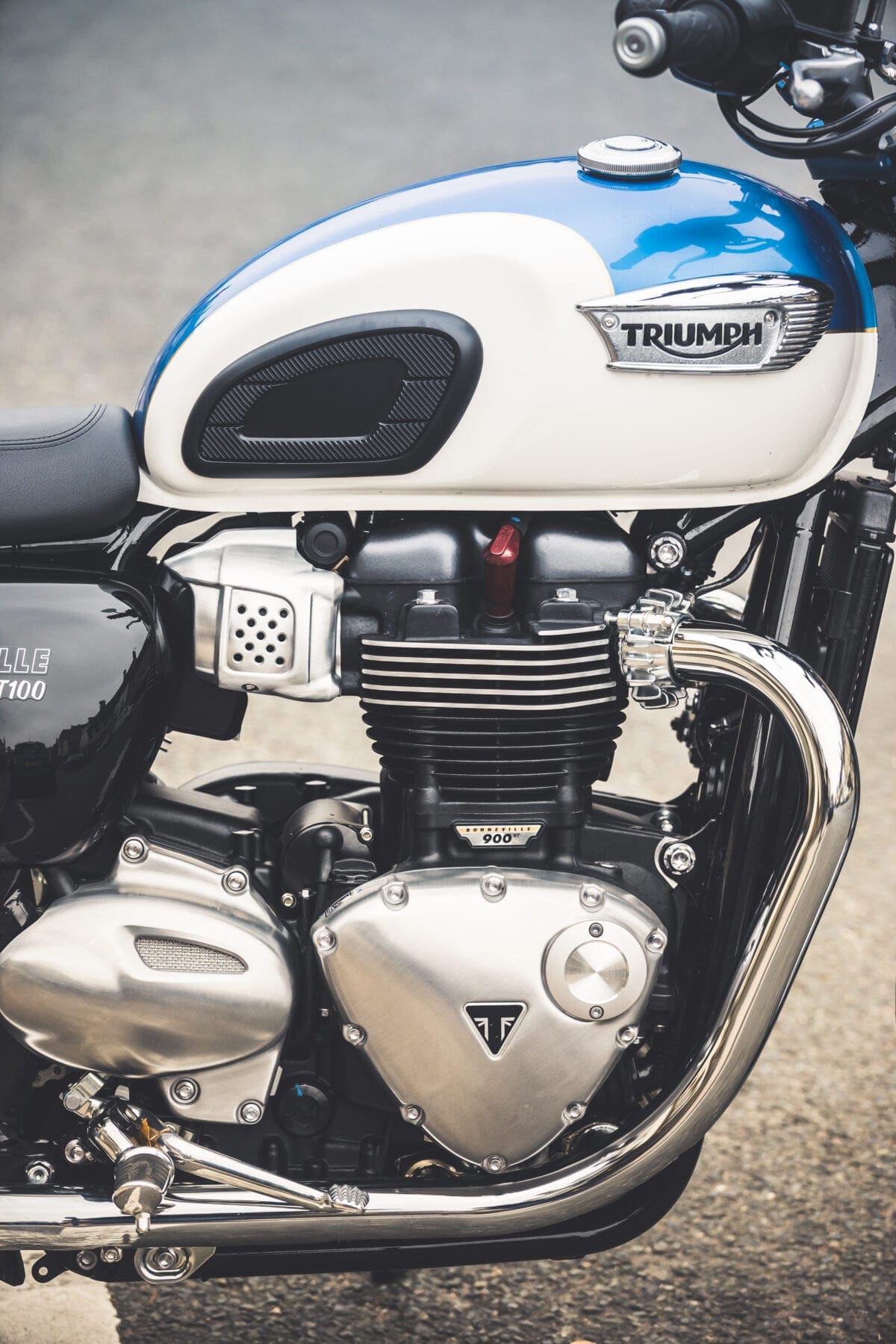 The sound that the parallel twin engine sends through the peashooter pipes is a lovely deep rumble. There’s nothing restricted about that. It’s a beautiful low note that you can still hear even with your earplugs deep in your ear canals when you open the throttle. And in towns it’s just loud enough to get some admiring glances from pedestrians.

With the engine so smooth and the power delivered to the rear wheel almost instantly, it’s easy to forget what kind of bike you’re on. I got a stark reminder of that in the first roundabout on our test route: I went in with some speed and banked the bike over only to hear the foot peg carving a semi-circle in the Tarmac. Backing off the throttle I appreciated how easily you forget that despite its playful engine, the T100 isn’t built for riding like that – you can only lean a bike like this so far before the fun turns into tears.

According to Triumph, one of the key development areas for this bike was the new chassis and suspension set-up, with the aim of improving the riding experience and comfort. The new bike’s geometry has been slightly adjusted from that of the T120, with the wheelbase now 5mm longer at 1,450mm, making the T100 significantly longer than the Street Twin (1,415mm). I was expecting this to make the T100 feel a bit slower to drop into corners and clumsy in town, but although it perhaps loses a little of the Street Twin’s agility, it still handles very nicely, and in fast corners the longer wheelbase helps to keep the bike more stable. 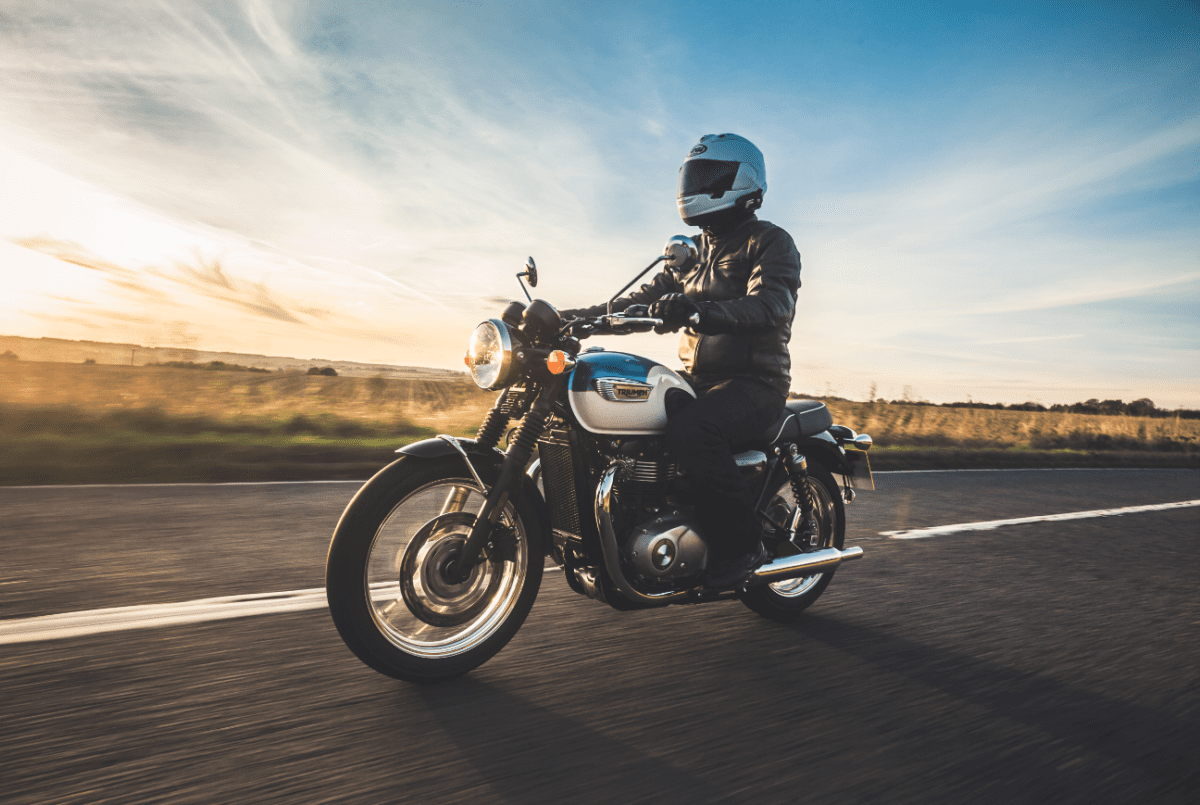 In terms of suspension, Triumph has raised the back end with a longer rear suspension unit, and the seat height is now 40mm higher than the Street Twin and 5mm higher than the T120 at 790mm. The aim was to improve handling, which sounds like an answer to the problem that John, our editor, reported from the T120 launch, where he had to crank up the preload to the max to get the bike to handle better. Whatever the reasoning, the changes in geometry and suspension have worked and the bike handles well and feels lighter and more manoeuvrable than its weight would suggest.

The suspension was quietly efficient throughout our test ride of some 120 miles. Only when pushed to speeds beyond UK speed limits did the suspension start to feel a bit harsh and the planted feeling of the bike started to wane away. 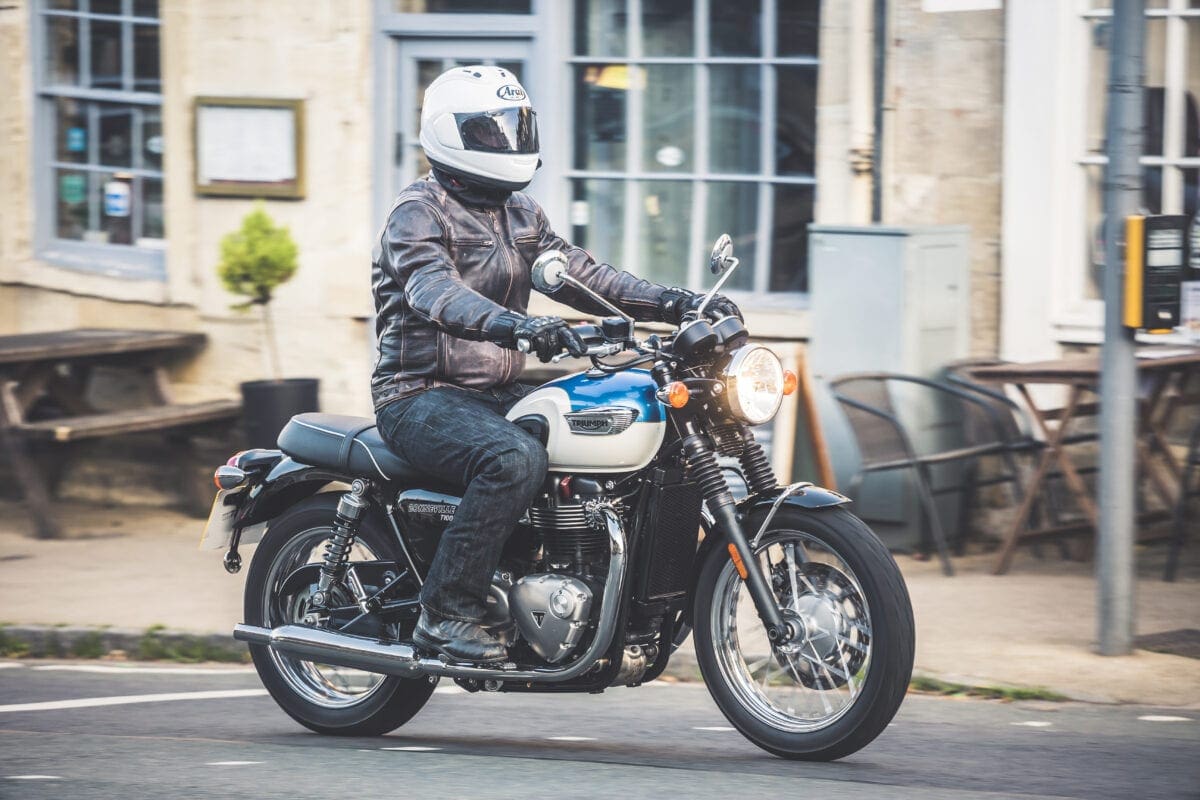 The brakes on the Bonneville T100 are excellent: there’s a single 310mm floating disc, with a Nissin two-piston floating caliper at the front and a 255mm disc with an identical caliper at the back. The ABS system is one of the nicest I have tested, with the feedback from the lever and pedal very gentle when ABS is kicking in, and the balance between braking power and anti-locking spot on. The grippy Pirelli Phantom Sportscomp tyres, designed especially for the Bonneville family, help with confident braking and cornering. I didn’t have a single slip throughout the test ride even though we covered some autumnal (read: greasy), leaf-covered back roads at decent speeds.

Riding the T100 was exactly what motorcycling can be at its best — relaxing and enjoyable. The riding position is comfortable, as you’d expect from a Bonneville, but if you lean in and anchor your knees to the rubber pads on the tank you can really lock yourself in position for some serious hooning. Just mind those foot pegs!

The T100 certainly ticks a lot of boxes. It’s lighter and easier to ride than the T120, while still retaining the classic looks and the awesome twin-cylinder soundtrack. It looks better than the Street Twin and wraps up the 900cc engine in a more grown-up package. The restriction kit will make it appealing to riders on A2 licences, which has to be a massive selling point for Triumph. Crucially, at £8,300 it’s also £1,500 cheaper than the big Bonnie. This could be a big seller for Triumph. 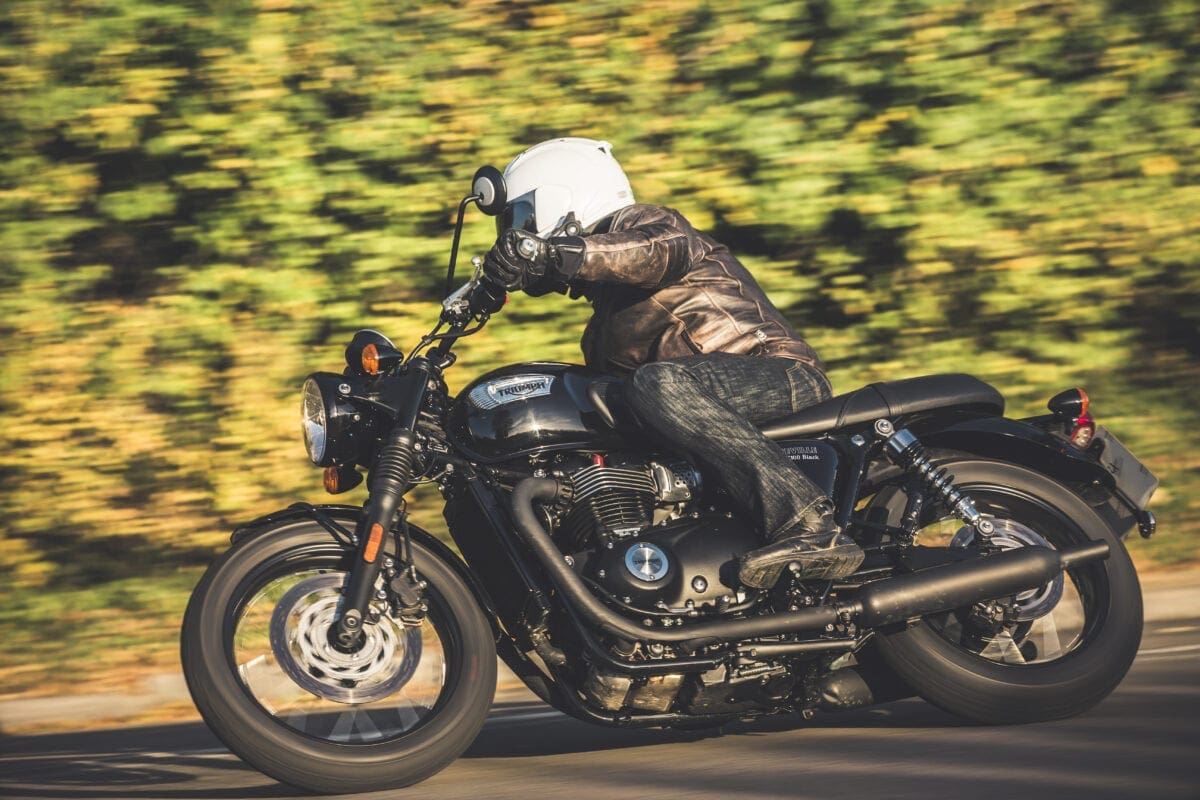 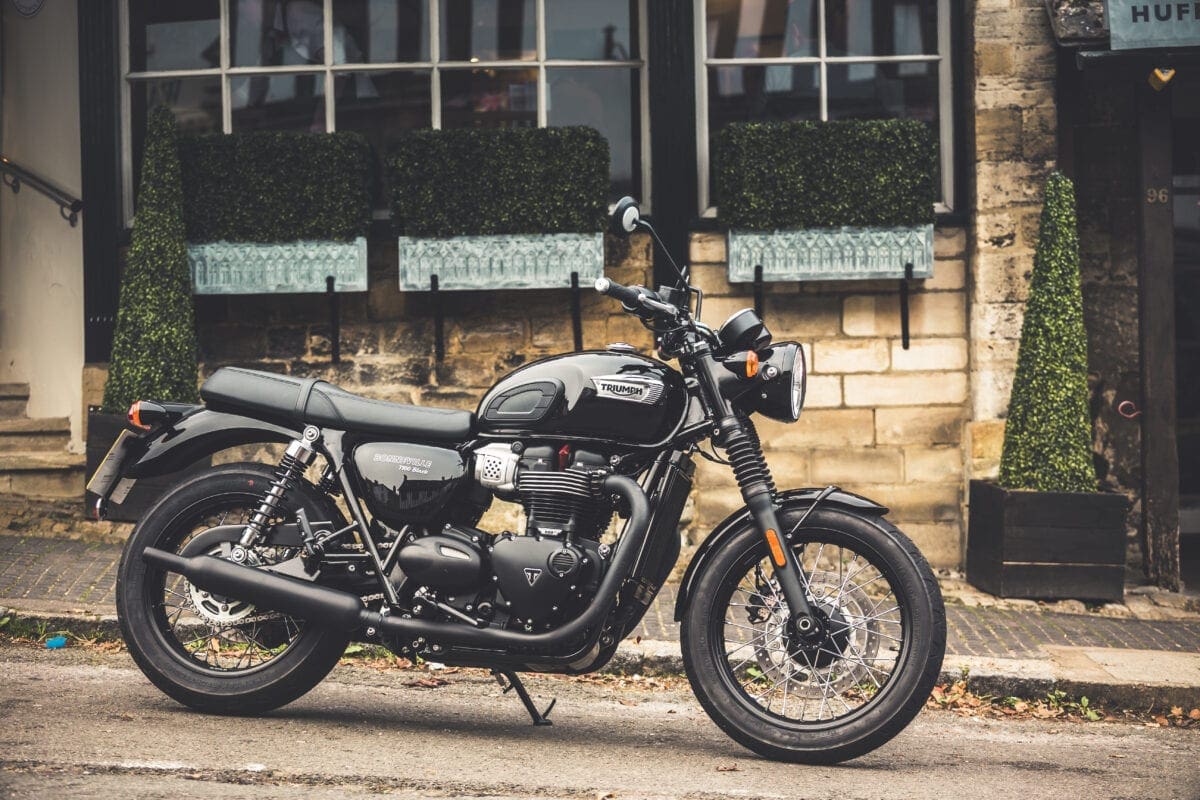 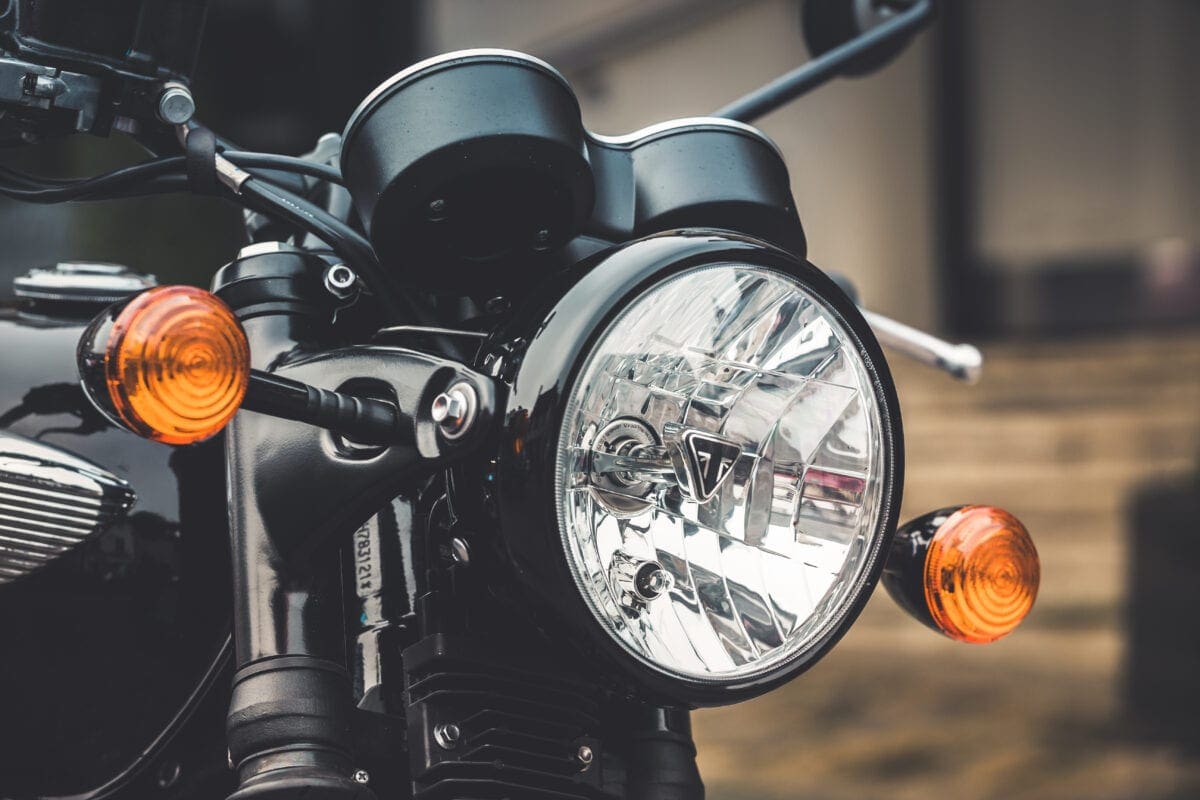 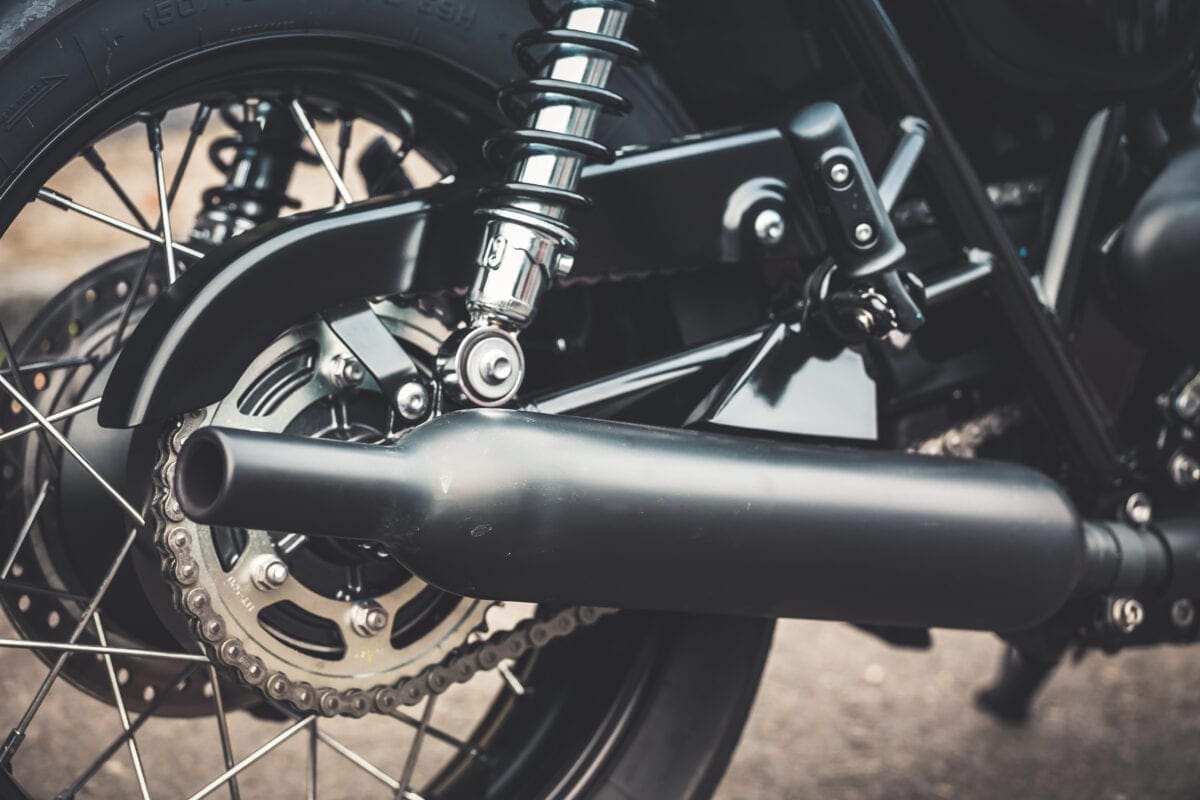 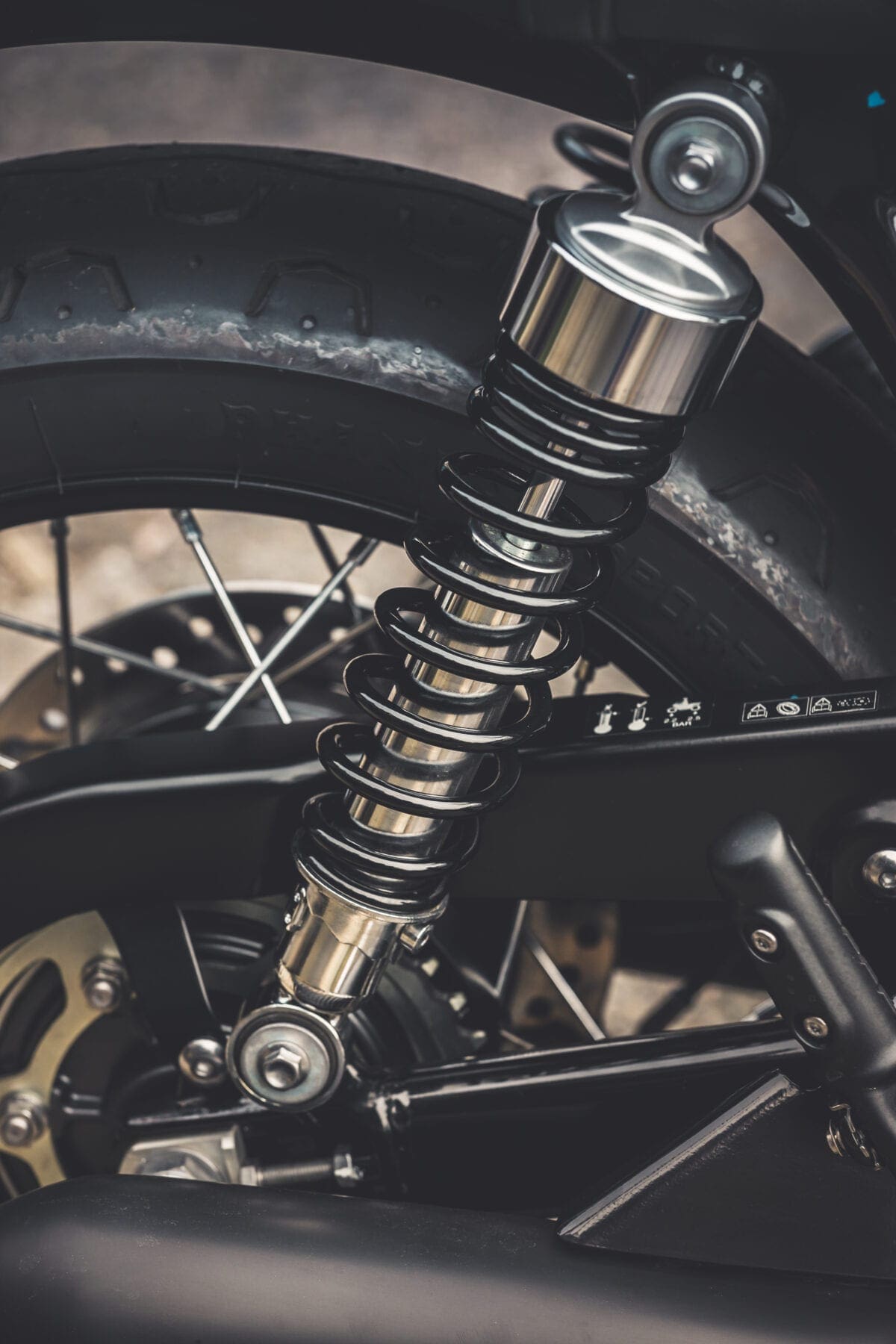 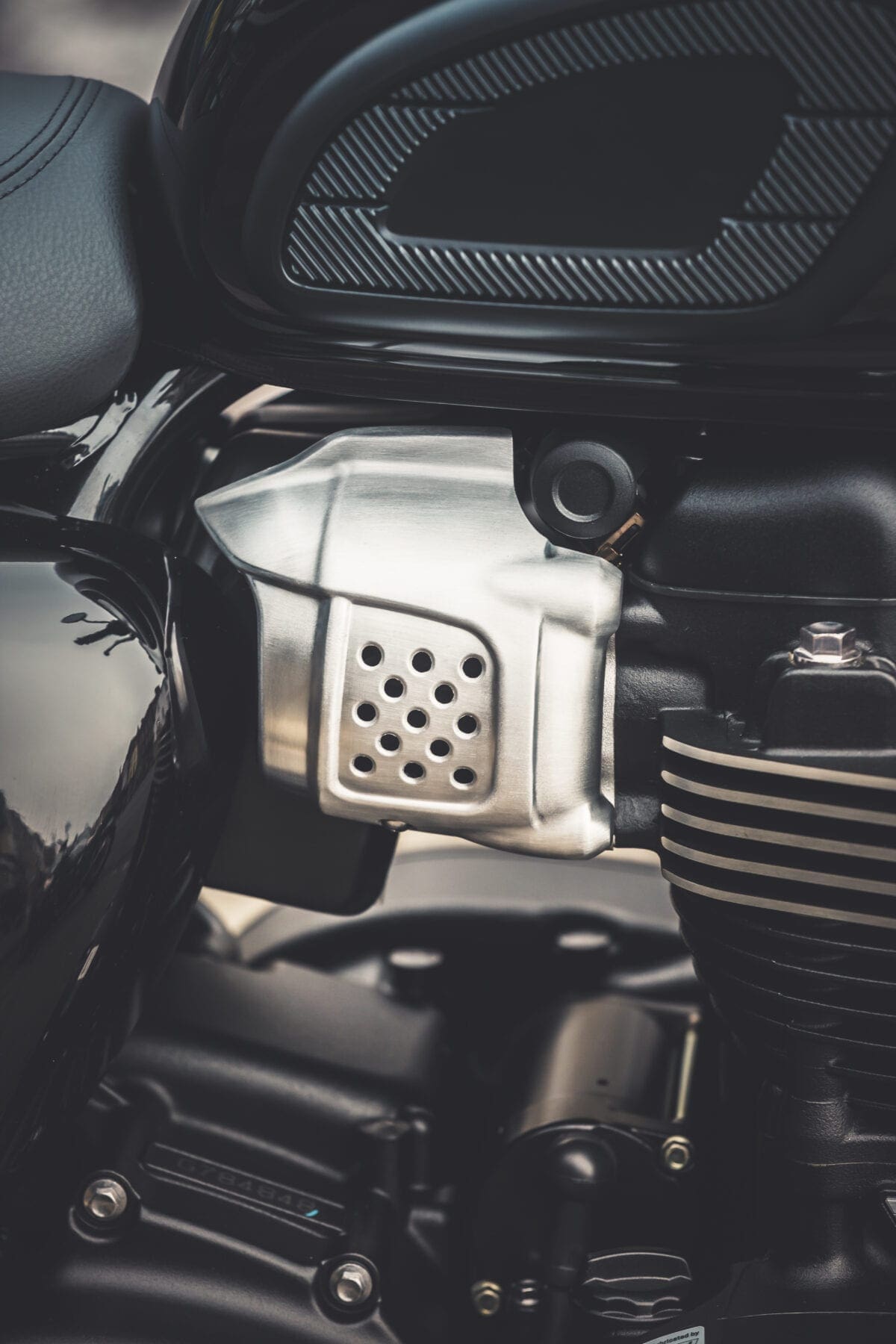 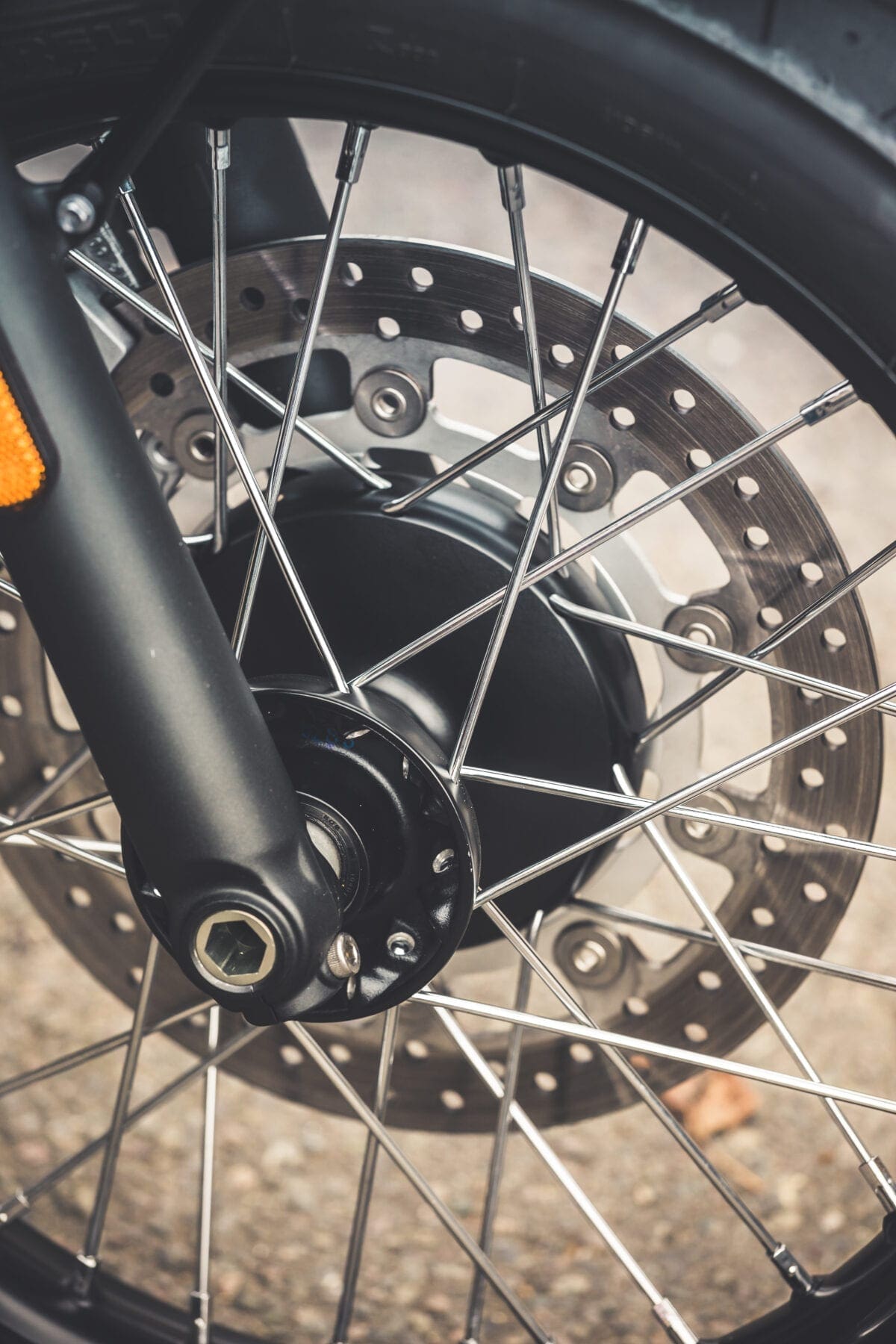 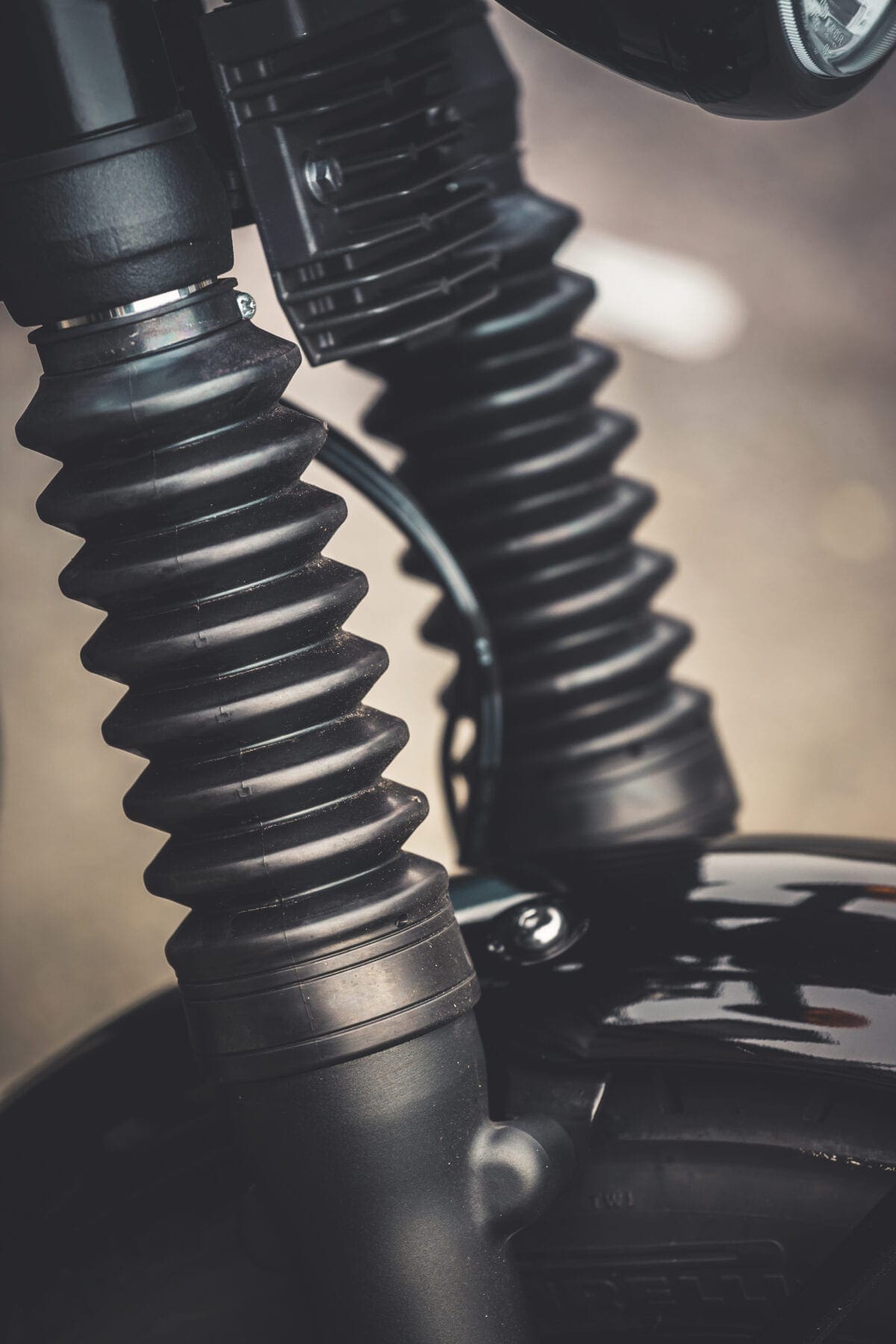