Get 25% more power with a bolt-on drum charger. And it won’t cost the earth!

Want to get up to 25% more power and torque out of your bike without spending a fortune? This new bolt-on drum charger might be just the thing you need! The power gains are reasonable, and although official prices aren’t available yet, the simple design of the product suggests that it will be more affordable than current turbo and supercharger systems.

Here’s a quick video showing how the drum charger works. Or check out the full details just below…

Ok, so the bolt-on system won’t give you quite the same power gains as a proper turbo, but it claims to give you a boost of up to 0.6 bar (8.7 psi) and some 15-25 percent more power, torque and efficiency. And the manufacturer estimates it costs roughly a tenth of the price of a turbo setup.

Turbos and superchargers are very effective, but they’re also complex, and therefore expensive systems (such as the set up on the Kawasaki H2). They also tend to work best at high revs.

With this in mind, Italian company Alter Ego has come up with a simpler, cheaper and more practical design: the Drum Charger is not unlike a turbo in as much as it harvests leftover exhaust gas energy to pressurize the air intake. But the design is simpler than a turbo, lacking the complex, fast-moving turbines and compressors.

Instead, the drum charger is a simple disc-shaped membrane. On one side of the membrane, it’s exposed to the exhaust gases as they pass through towards the muffler, via a closed channel that comes off the main pipe. On the other side is the air intake. 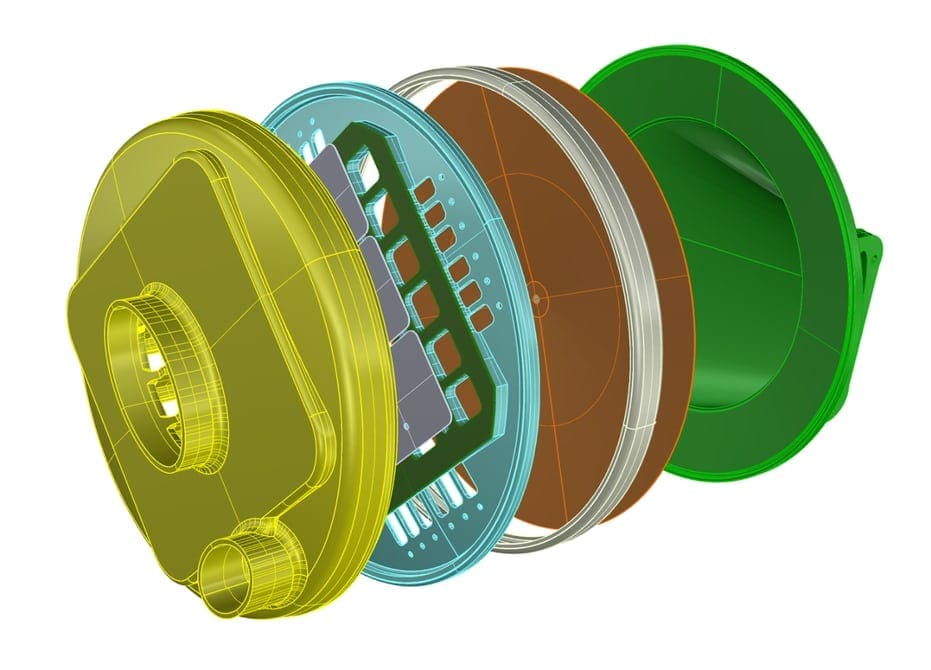 When the cylinder fires, a pulse of hot exhaust gas is sent down the pipe, part of which exits out through the muffler, but part of which goes down the drum charger’s closed channel and pushes against the membrane. As the membrane gets pushed away from the exhaust, it reduces the volume in the cold intake chamber, increasing the pressure before that air is sent to the airbox through a series of reed valves.

As soon as the exhaust pulse finishes, the membrane returns to its original position thanks to a leaf spring, bouncing the pressure wave back out into the exiting exhaust, but leaving the gas in there – so this channel never heats up beyond 50 degrees Celsius. As it’s driven by the exhaust pulses, it’s totally synchronized to the cylinder’s combustion cycle – so, provided the drum is the optimal distance from the exhaust header (some 60-80 cm, depending on the model) it will always develop its pressure charge at exactly the right time. 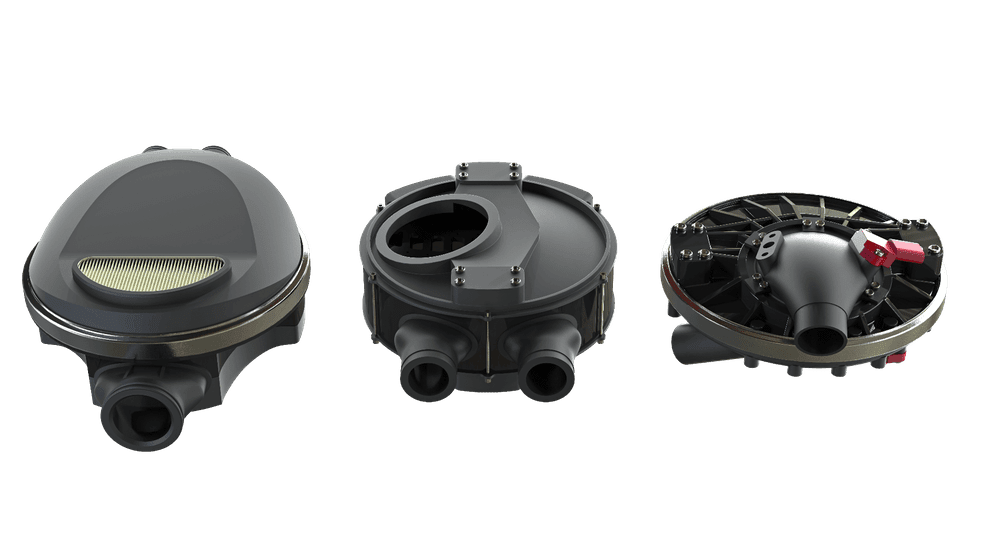 Alter Ego reckons that this setup creates a boost of around 0.3 bar (4.35 psi) with a single drum charger, or 0.6 (8.7 psi) with a dual-membrane unit. This from a simple plastic drum with a carbon fiber membrane, a spring, some valves and no other moving parts. That doesn’t compare with the kind of boost you can get from a turbo or supercharger – the Kawasaki H2’s standard blower makes up to 1.41 bar (20.5 psi) – but it’s an incredibly cheap and easy way to get the same effect at a lower and more practical level where you don’t have to start worrying about what grade fuel you’re running. 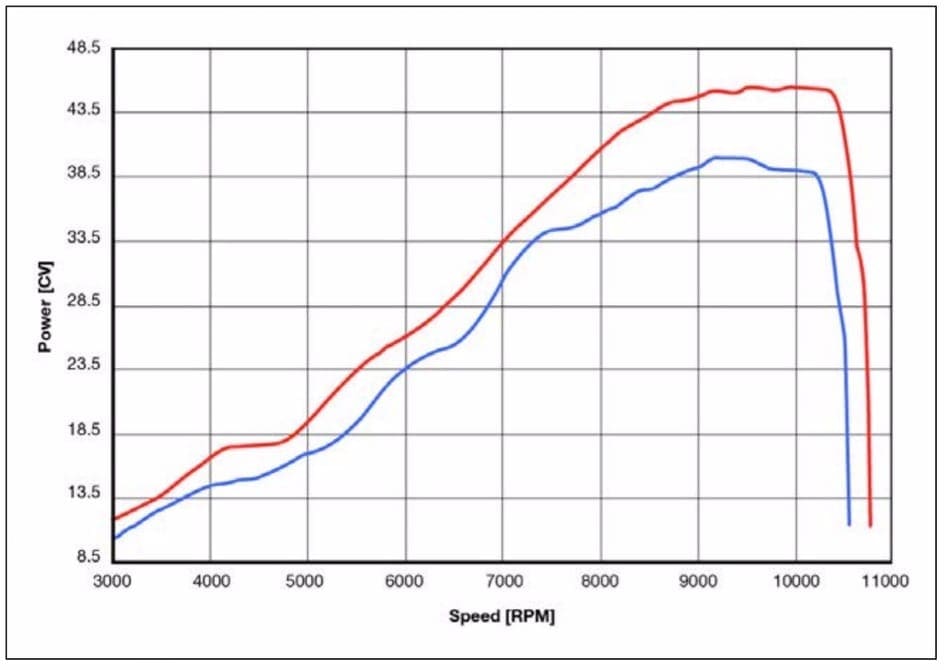 There are even different designs for motorcycles and scooters: 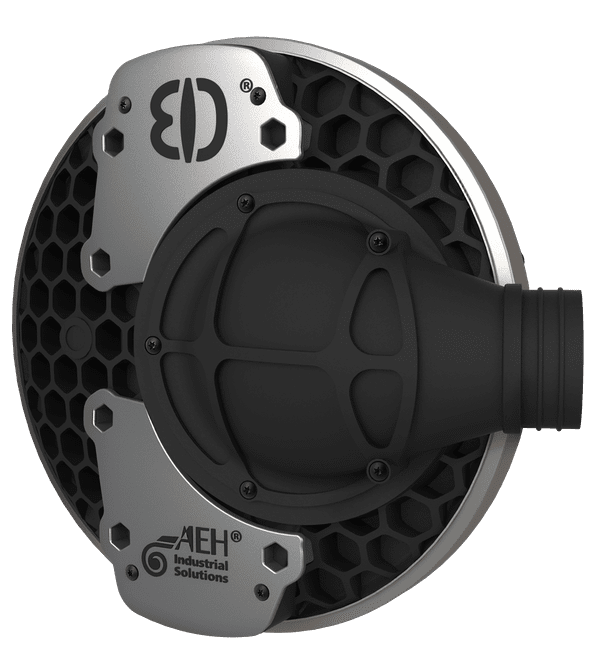 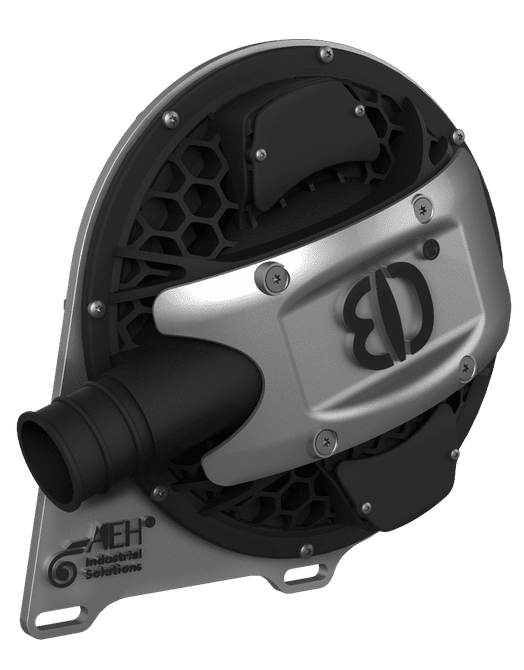 The downside is fairly obvious; the drum charger is a big chunk of plastic that needs to sit somewhere on your bike. That membrane can’t do much work unless it’s a decent size – around 220 mm diameter is enough for small capacity bikes and scoots where each cylinder is less than 250 cc, and larger cylinders up to 400 cc require a 270 mm diameter membrane to get enough pressure generated.

And this is all per-cylinder. Each drum charger works exclusively on a single cylinder, making this technology extremely cumbersome once you move beyond a twin. So you’re not going to be seeing it pop up on an inline four superbike any day soon. In fact, an 800cc twin is about as large a motor as Alter Ego thinks the drum charger will be able to work for. 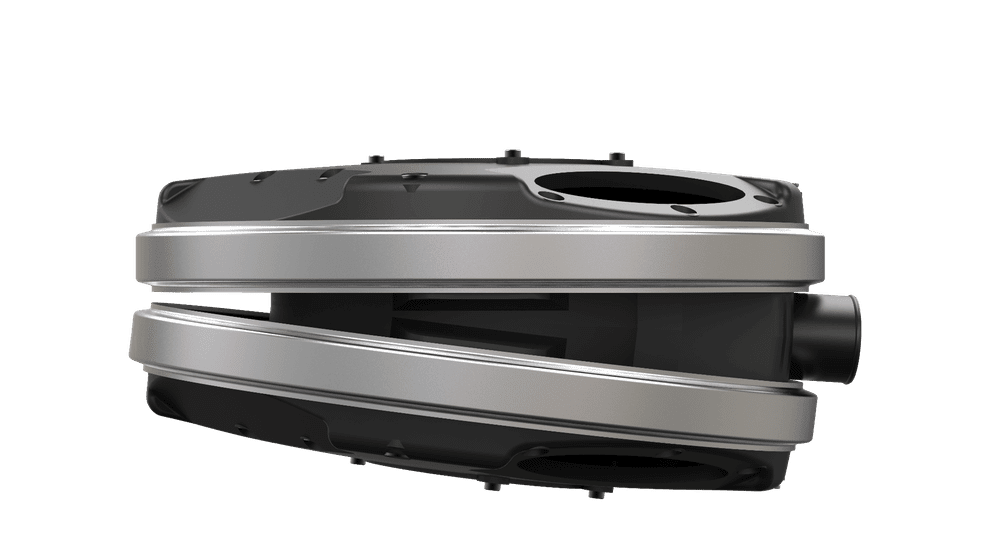 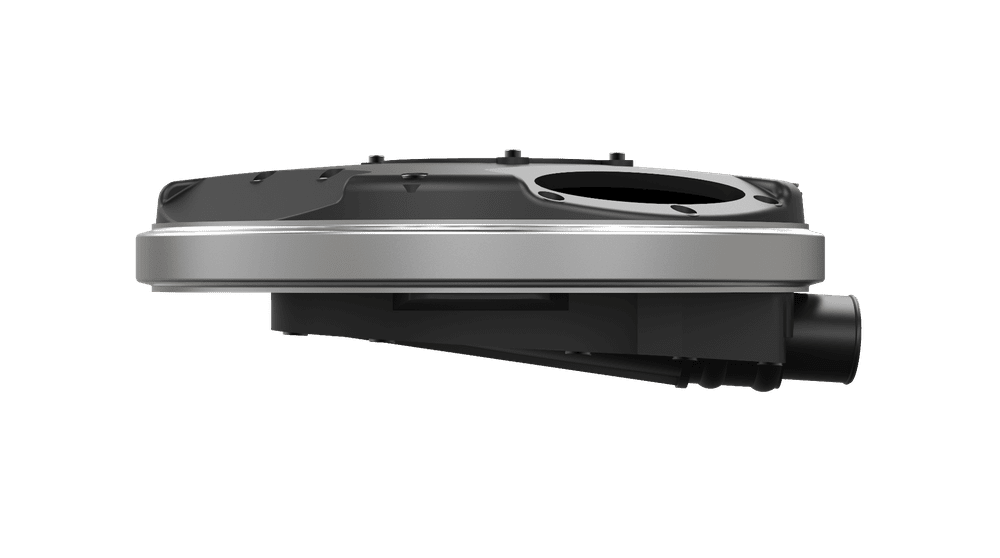 Alter Ego has fitted the system to a KTM RC390 (two single-membrane drum chargers bolted on a single-cylinder sportsbike) and they say that the bike received an instant 15-odd percent power and torque boost across the entire rev range, with a smoother power curve that the company claims leaves the bike very usable.

In addition to the KTM, Alter Ego had produced some cool CAD drawings of what the system would look like on different bikes, including a Ducati Scrabler, Piaggio Medley scooter, and an awesome Suzuki SV650 concept: 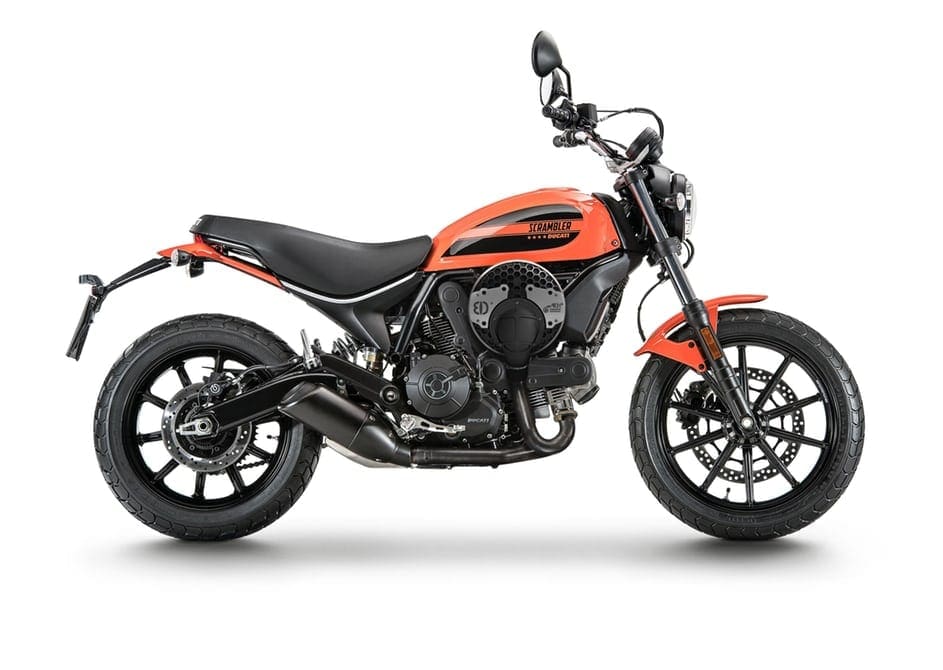 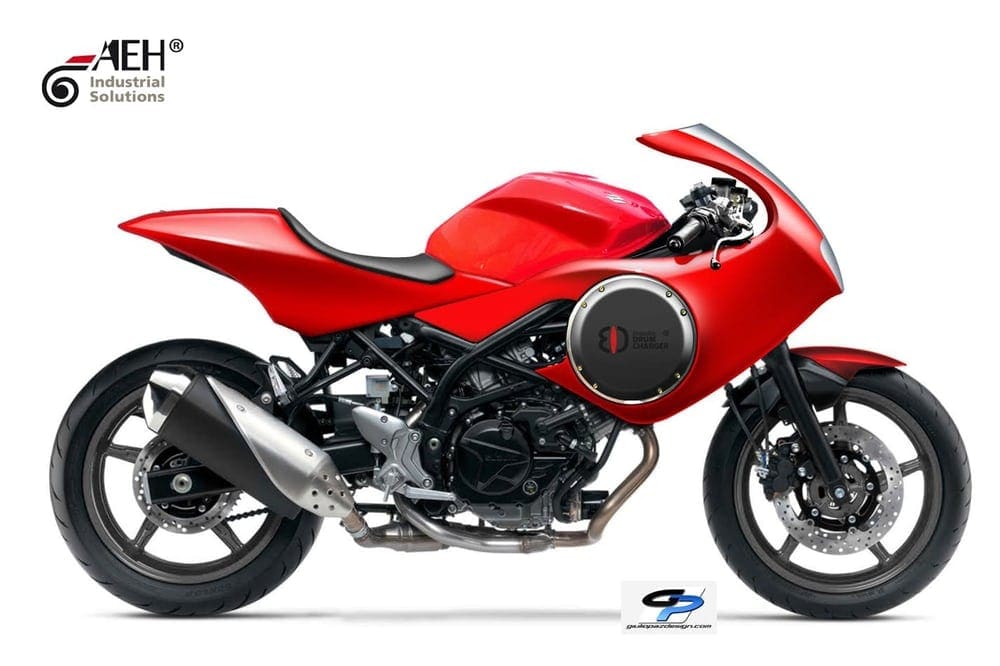 Alter Ego is also planning on selling the drum charger concept straight to manufacturers who can use it as an OEM component. A bike designed around the idea of drum charging could theoretically get rid of the airbox altogether, freeing up space for one or more chargers.

From the SC1 and SC2 concepts, we know that Kawasaki has been developing what they call “scalable supercharging” for a number of years no, but haven’t seen these on a production bikes yet. The solution that Alter Ego has come up with might be a cheaper option, and with a bit of luck it might available before Kawasaki gets off the blocks. 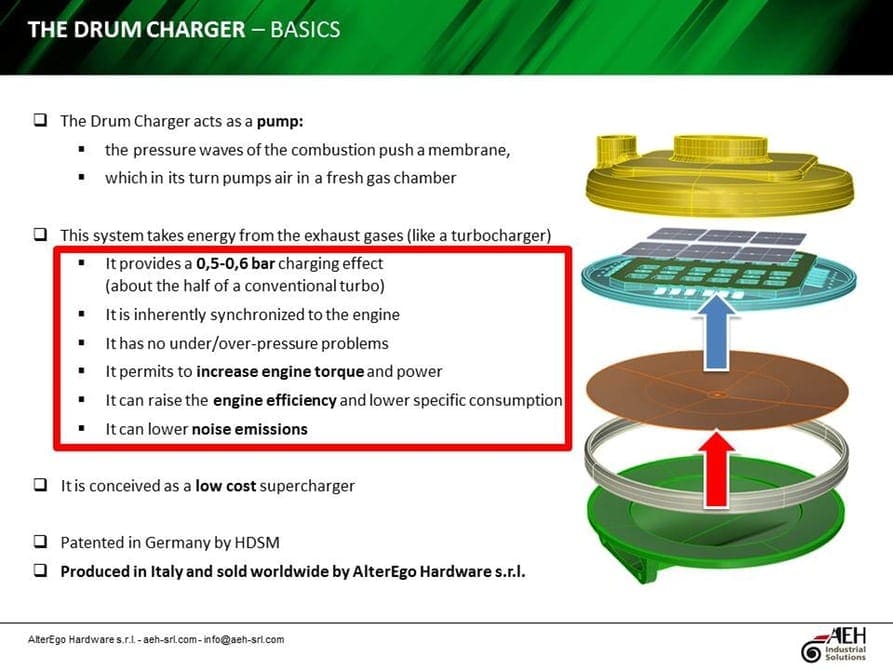 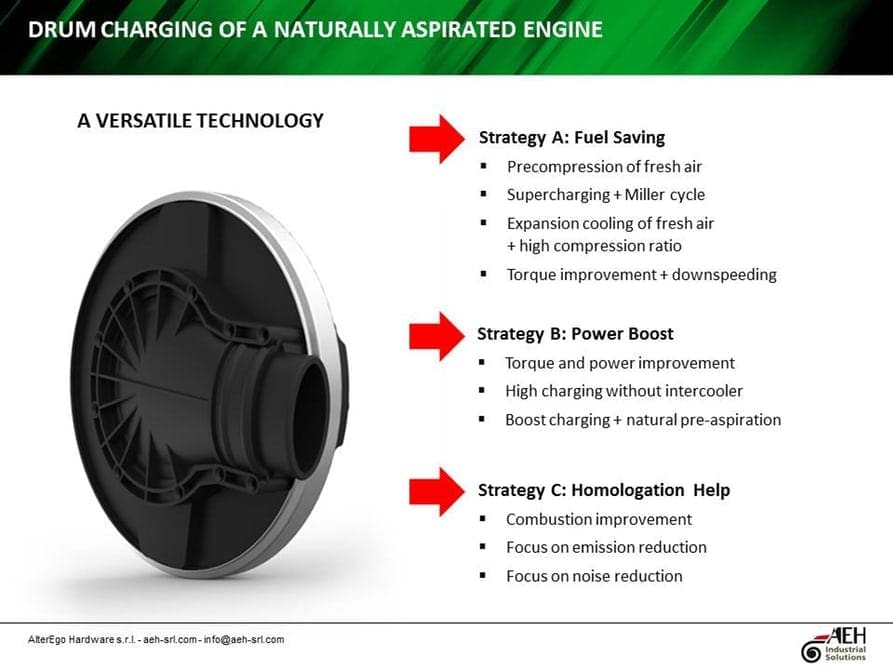 For more information about the system, have a look at: alterego-hardware.com