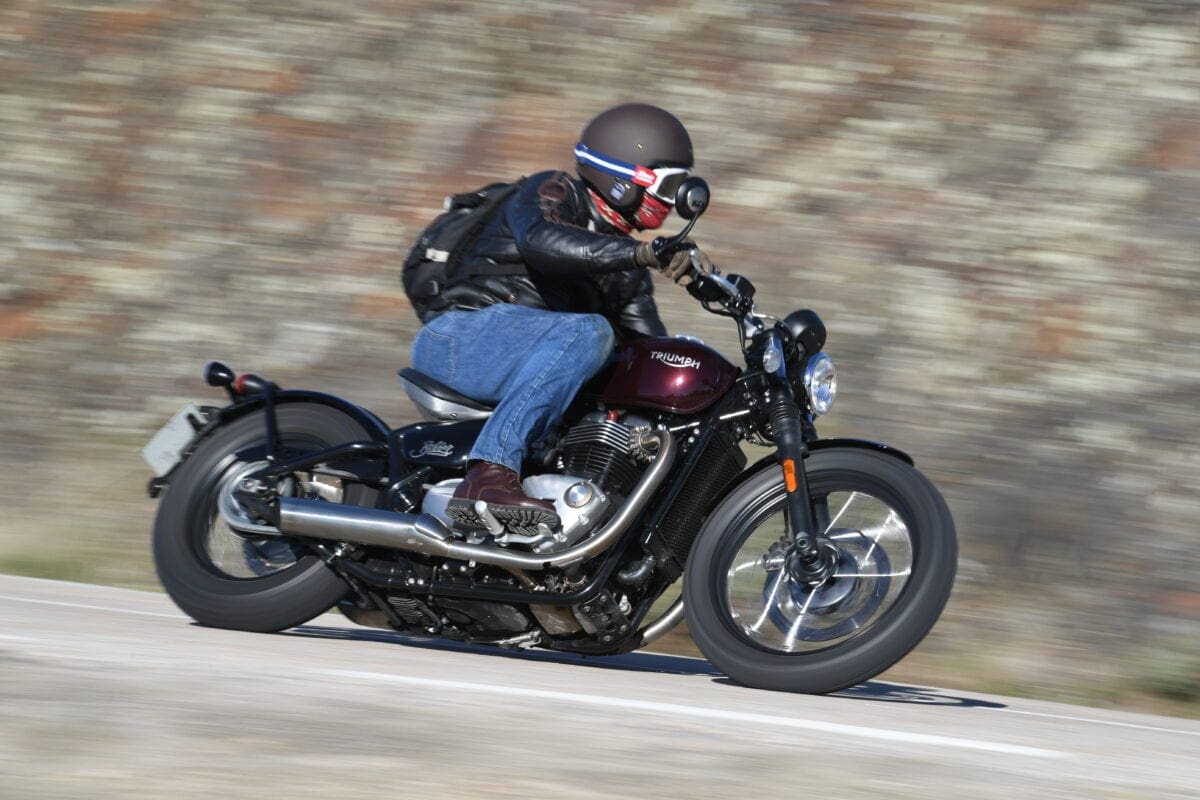 It seems I’m the only person in the UK who didn’t really like the Bobber when it was launched. In photos I thought it looked too bulky at the front. Even in the metal at Motorcycle Live I wasn’t impressed. This was a factory custom too far. A styling exercise and little more.

Of course, just because it wasn’t for me, wouldn’t mean others weren’t going to like it, and Triumph’s claim that the UK’s first allocation of 450 units will be going to cash pre-orders (production schedules have been revised, so there should still be bikes in stock in February) indicates that I’m certainly in a minority. But this faux-hard-tail was never, in my mind, going to be much more than an object d’art. It would be for posing outside a Shoreditch café, nothing more.

I was very wrong. 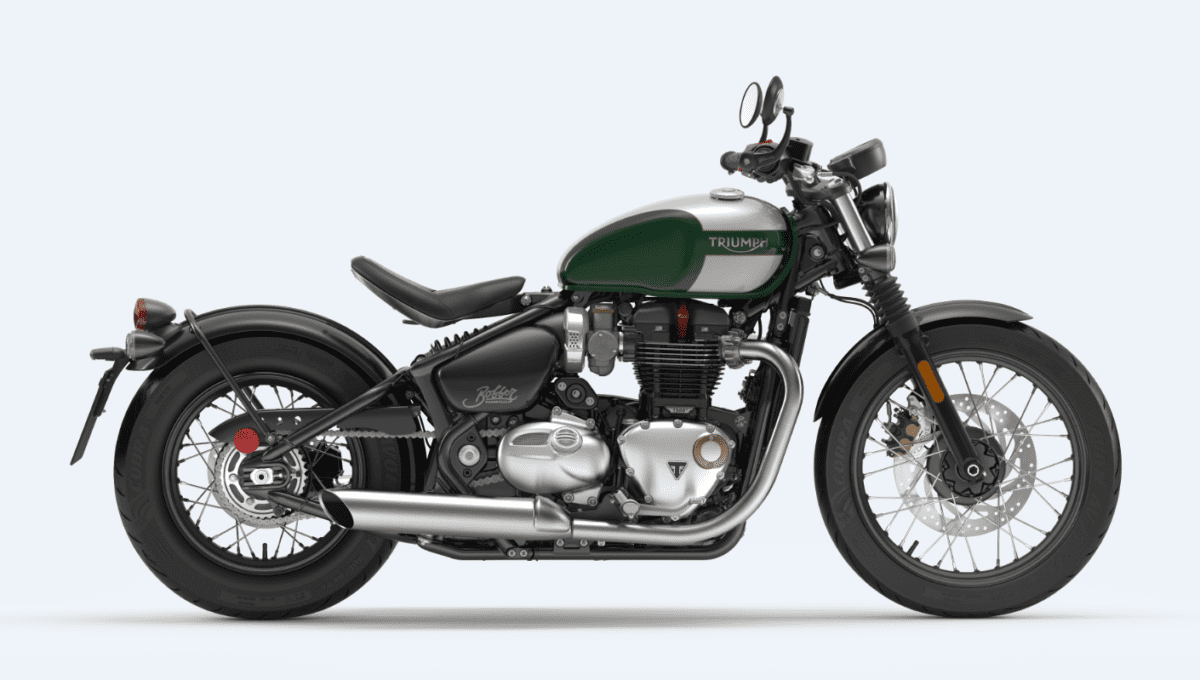 The Bobber uses the same engine as the T120 Bonneville, but it’s far more than just a rehash with a clever fake hard-tail. The gearing is the same as the T120, including the final drive, so any differences in performance are purely down to the Bobber’s tune, which includes a new pair of air-boxes that sit on either side of the shock, and the new exhaust, which uses the T120’s twin-skinned downpipes to hide the diversion through the catalytic converter beneath the engine. It’s a piece of design engineering genius that gives wonderfully simple, flowing lines to the bike as your eye follows the path from the mock carbs, through the cylinder head, then down and out of the exhaust.

The ‘High Torque’ engine drives smoothly out of corners, and feels strong, if not frantic. It’s no sportsbike of course, and while it would have been interesting to feel it with the Thruxton’s ‘High Power’ tune, which makes more power and torque throughout the rev range, this isn’t a machine that feels like it needs any more.

Extra speed would need to be scrubbed off more quickly, and the Bobber has a stylistically-dictated single disc, bitten by a twin-piston caliper. It doesn’t look enough in a world of radially-mounted four-pots, but it is. It seems that a good choice of pad material, combined with braided brake-lines and an unobtrusive Continental ABS unit, give enough stopping-power for all but the most panicked deceleration. And adding some back-brake meant I never got into any difficulties, even when things got a little, erm, spirited. 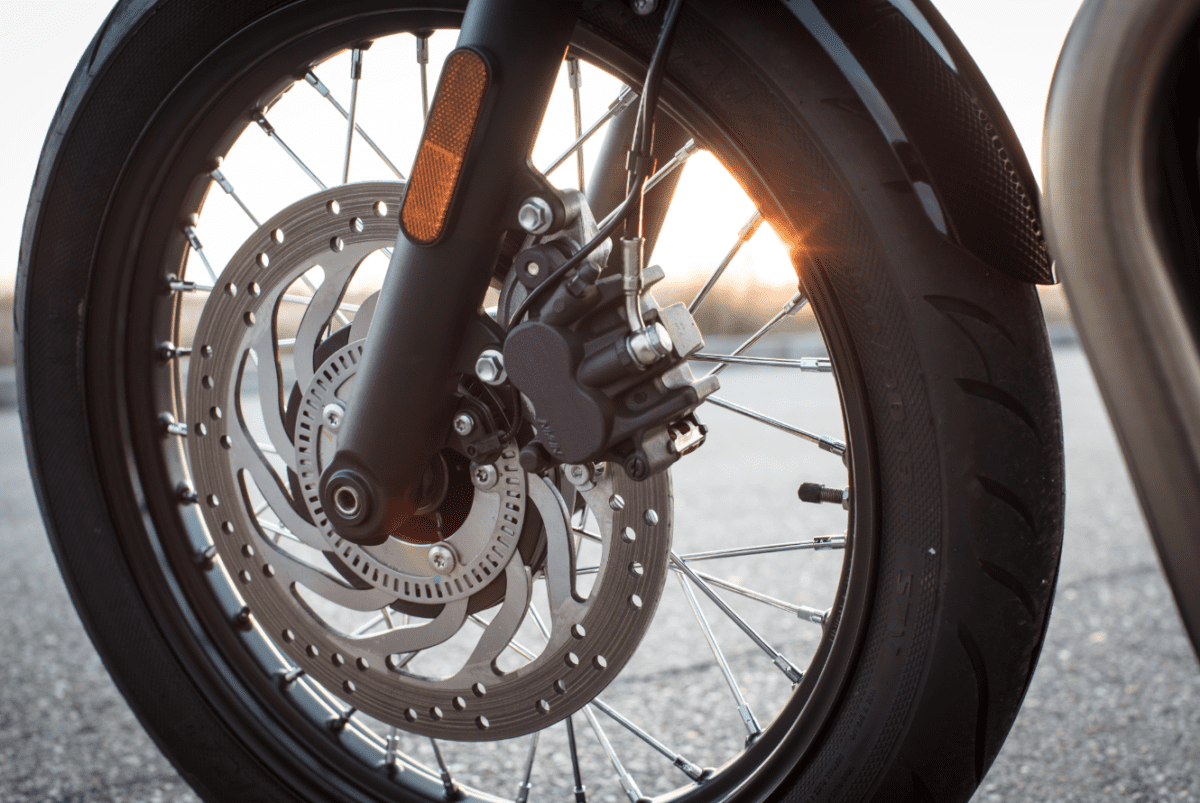 I did notice a little snatch in the throttle when rolling on and off – it seems a common thing in today’s leaner fuel maps, but it wasn’t overly intrusive. The ‘rain’ riding mode reduces low-down throttle response, but feels very natural, and doesn’t decrease the peak output.

Sixth gear at 3500rpm pushes you along at an indicated 80mph. The rev-limiter cuts in at 6750rpm, and while we did get some motorway and open-road riding in (which was surprisingly easy going for a bike like this), we didn’t get the chance to find the top speed. That’s not what this machine is about, but one journalist, who did a slightly different route, said that from 110mph the Bobber felt to be running out of breath. It’s hard to truly feel a difference between the motor’s T120 incarnation, but the handling dynamic does seem to make the bike  feel more rapid. 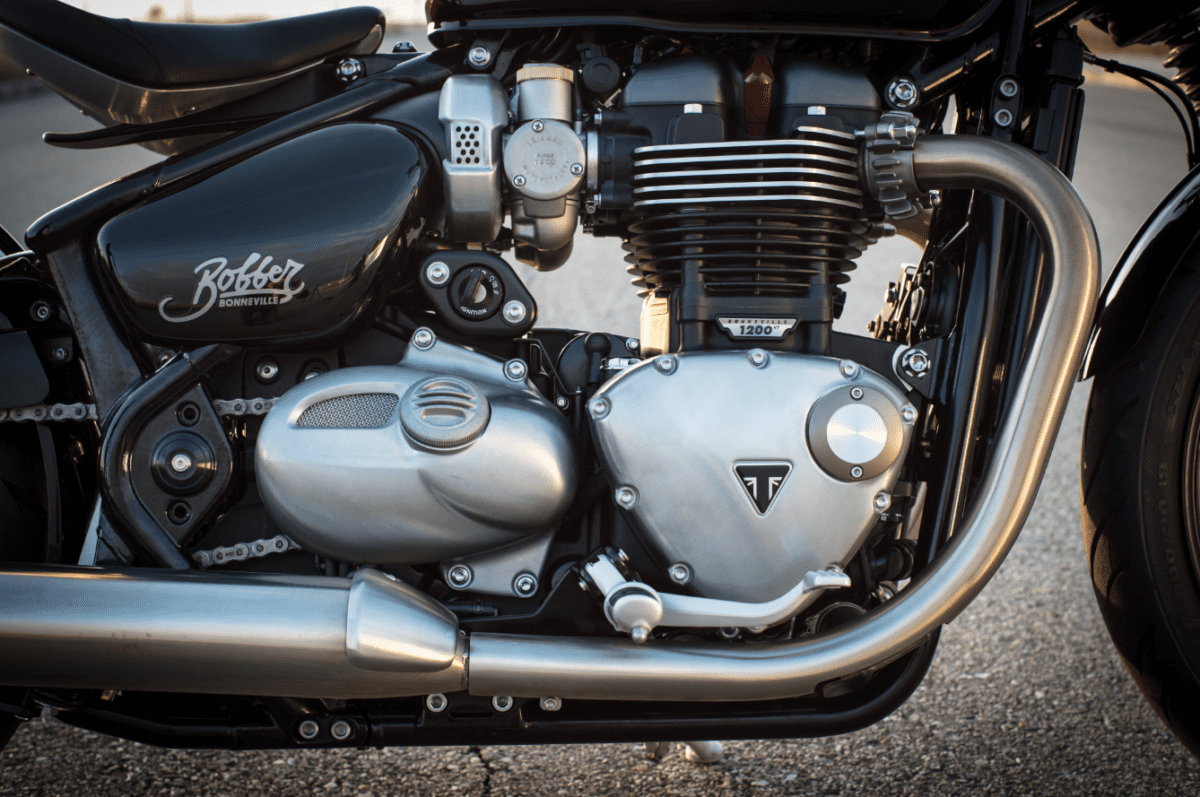 The handling is brilliant. The pegs do touch down easily, and after our day’s riding – which saw 24 bikes on the road – twelve machines had suffered scraped exhausts. To be fair, we were over-excited journalists, racing each other on switchback Spanish roads, pushing the machines over as far as possible for photos. I didn’t touch an exhaust down, but there was nothing left of the pegs’ hero-blobs after the 130 mile ride.

The bike’s fully-fuelled kerb-weight is lower than the Bonneville T120, at 237kg compared to 239kg, but that’s thanks to the smaller tank, which is 14.5 litres on the T120. The Bobber’s dry weight of 228kg is greater than that of its sibling, at 224kg, and while the machine can feel a little weighty at times, even on the move, the mass is carried very low in the frame. Despite this, handling is uncompromised, and while lean angles aren’t great, it’s certainly better than the Harley-Davidson Forty-Eight that Triumph sees as one of the bike’s rivals.

Other machines that the company imagines will be on prospective buyer’s shopping lists are Indian’s Scout, Yamaha’s XV950 and Moto Guzzi’s V9 Bobber / Roamer models. I think the Triumph sits in a class of its own, not least due to the fact that it’s so single-minded – there is no option for a pillion here. Yet despite quite stiff competition, the Thailand-built, Hinckley-designed machine has a huge amount of character, and is a great success in its own right. 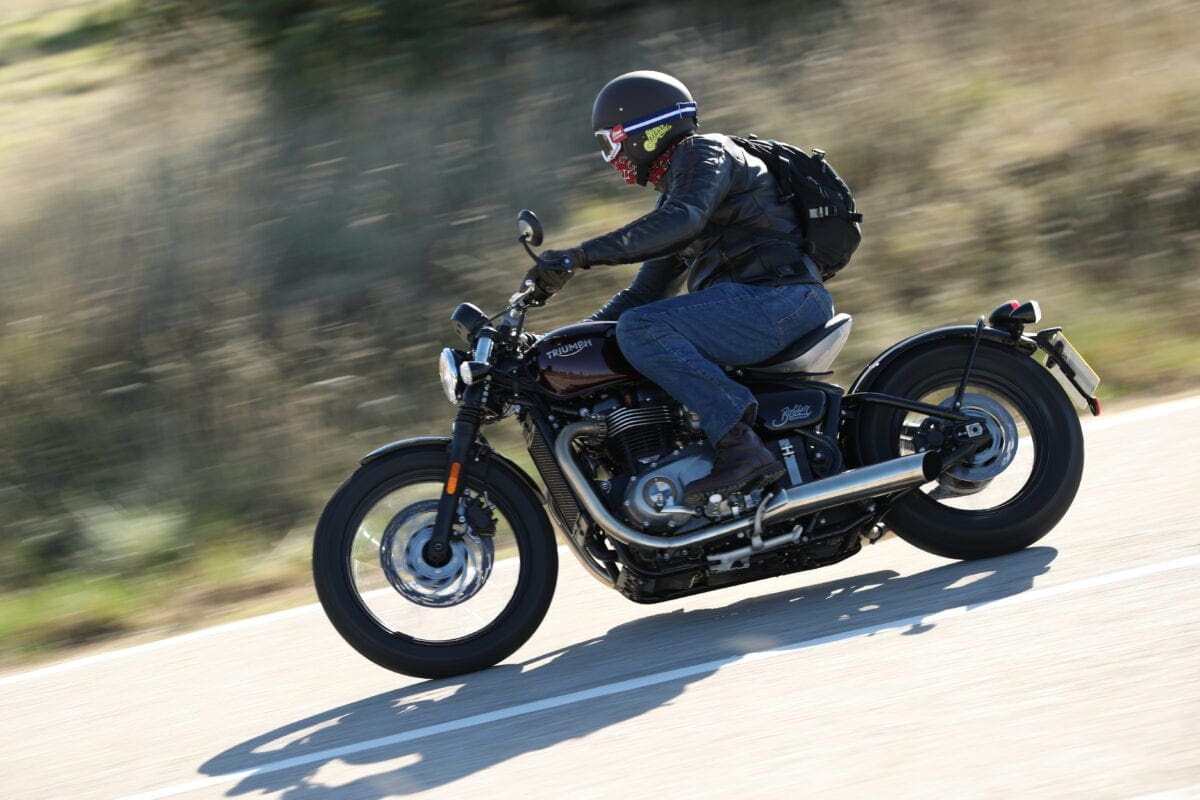 The riding position is surprisingly comfortable and natural. I did expect the 690mm-high saddle to be lower, and the bars higher for more of a custom bobber feel, but it made for a machine you could spend a long time on. The saddle, which can move backward by an inch or so, is claimed to offer a more traditional feel in its rear position, but I, and others who tried it, couldn’t really notice that much of a change. If anything, it seemed fractionally less comfortable, putting a little more weight on my bum. Longer legged riders might appreciate it, but even those well over six feet had no complaints; this aluminium-framed seat is very well made, and very supportive.

Not that you’re likely to be in it long without a break. Triumph was keen to stress during its marketing presentation that the claimed 69mpg economy, which would give a range of 138miles from the 9.1 litre tank, is gained from homologation tests in a variety of riding conditions, so is “a true representation of what can be achieved.” I saw 40.8mpg in the morning, which would give 81miles – at 65miles my fuel light was on, and when we stopped for petrol at 75miles, the fuel gauge showed empty, with the digital range zeroed out. 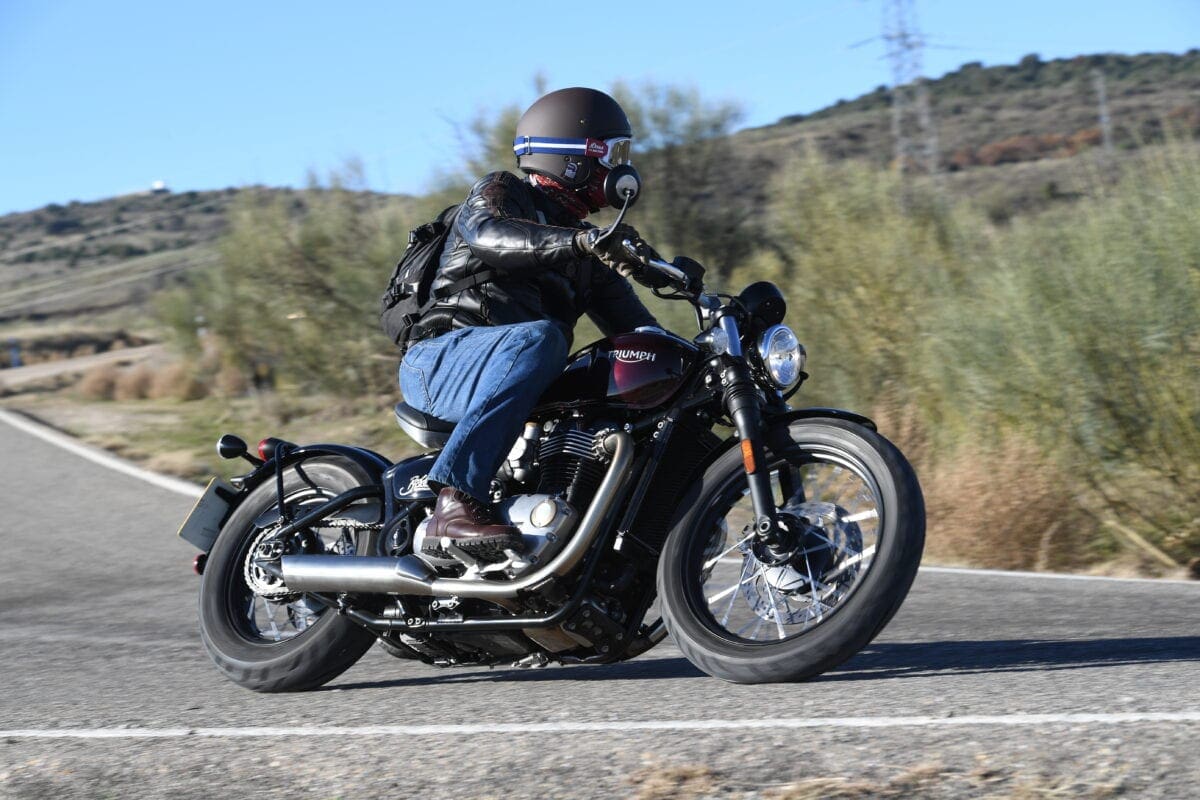 I’m usually the least economical rider on a test, and in the afternoon I achieved 46.3mpg. Another journalist ended the day at 51.5mpg, giving the tank – which is unique to the Bobber – the potential to take you 103miles. Realistically, in day-to-day riding, you’ll be looking for fuel by around 90 to 100miles.

It seems a shame that to adjust the seating position requires at least a spanner (Triumph recommends a torque wrench), yet the only tool supplied with the Bobber is a single Allen-key with a cross-head screwdriver on one end. Still, it’s likely most will find a position and stick with it. The optional higher (but not too high) ape-hanger handlebars will likely be popular, and while we didn’t have a chance to ride a machine with them fitted, they certainly feel unintimidating at a standstill. Sadly there’s no official kit to move the pegs further forward, though it wouldn’t surprise me to see custom shops creating something. 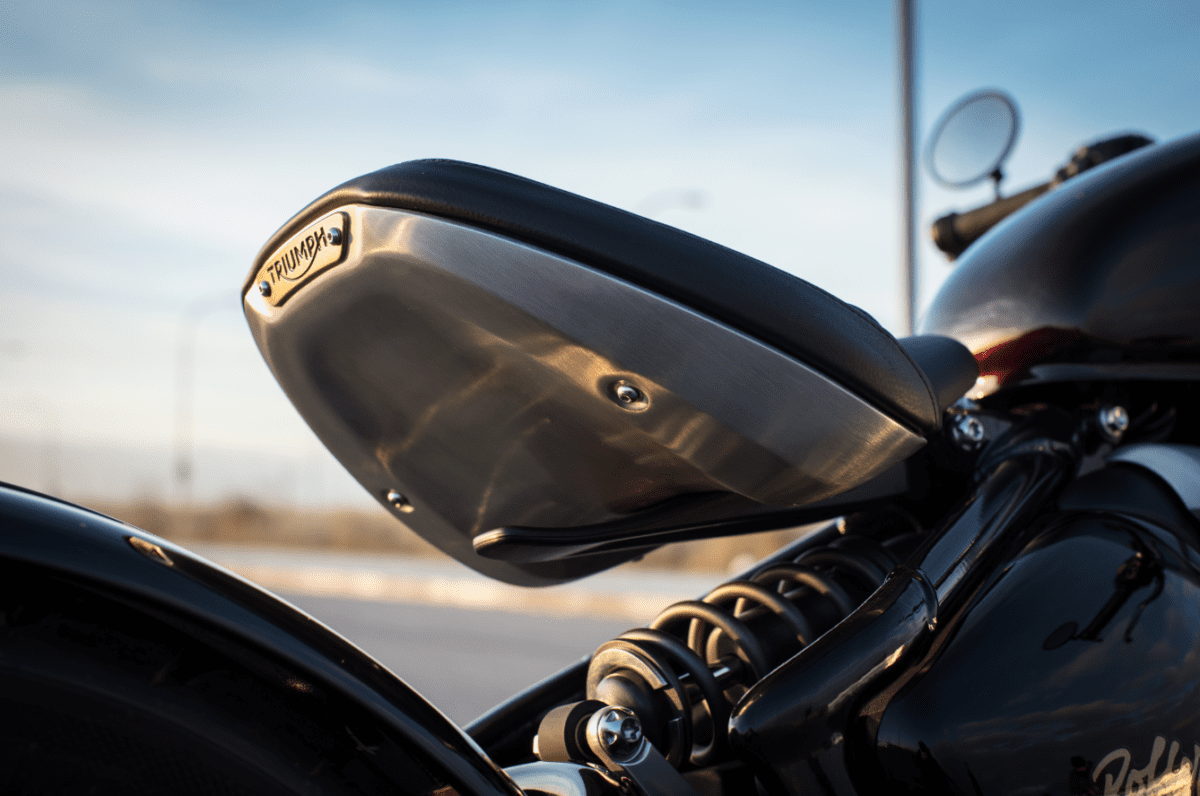 The bar-end mounted mirrors are another nod to practicality, looking good (though not as good as the optional shorter-stemmed items) and giving a clear view behind. Due to the 2°C morning ride out of Madrid towards the mountains, our bikes were fitted with Triumph’s excellent optional heated grips, which integrate well leaving no visible wires, and display their off, low or high setting in the dash’s digital display.

The single clock has a large analogue speedo with a small LCD set into the lower portion that shows the gear position, fuel level and riding mode, along with a choice of revs, odometer, two trips, clock, range to empty, average and current fuel consumption, service indicator, traction control setting and the cruise control setting if this optional extra is fitted. It’s a good-looking design, though the small digits can be a little hard to read. 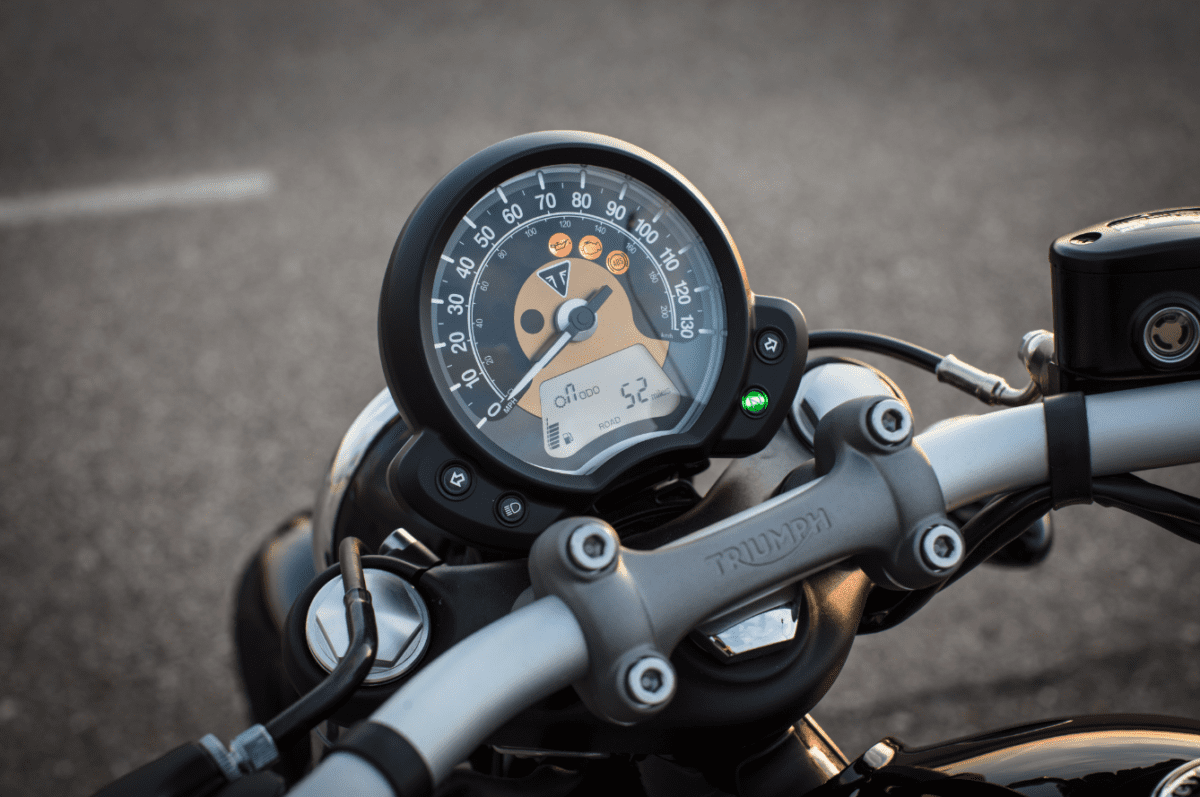 Cleverly, the clock can be unlocked with a cam lever beneath, and either laid flat for a smooth line across the top of the bike, or tilted up for better visibility. I preferred it in the up position.

The T120 showed incredible engineering excellence in creating a traditionally-styled bike with all the modern trappings that a Euro 4 requires. Catalytic converter, ABS, charcoal canister, plumbing and more were all hidden. I didn’t think it handled that well, feeling too slow and awkward to turn thanks to a low, soft rear. The Thruxton was, in my eyes, the pinnacle of Triumph’s 1200 Bonneville range, being incredibly lively, beautifully styled and enormous fun to ride. I wanted one, and while it’s my job to point out the good (and bad) of every bike I review, it’s very rare that I find myself running bank-loan figures through my head on the way home.

The Bobber has replaced the Thruxton in my dream garage. It is an object d’art, but it’s also one of the most engaging bikes I’ve ridden for a while. A machine that looks like this should not be so easy and unintimidating to ride. It shouldn’t turn so easily. It shouldn’t feel so comfortable. It shouldn’t be so pleasurable. But it is, and yet again, Hinckley’s engineers should be truly admired for what they’ve achieved. I’m glad I was so wrong. 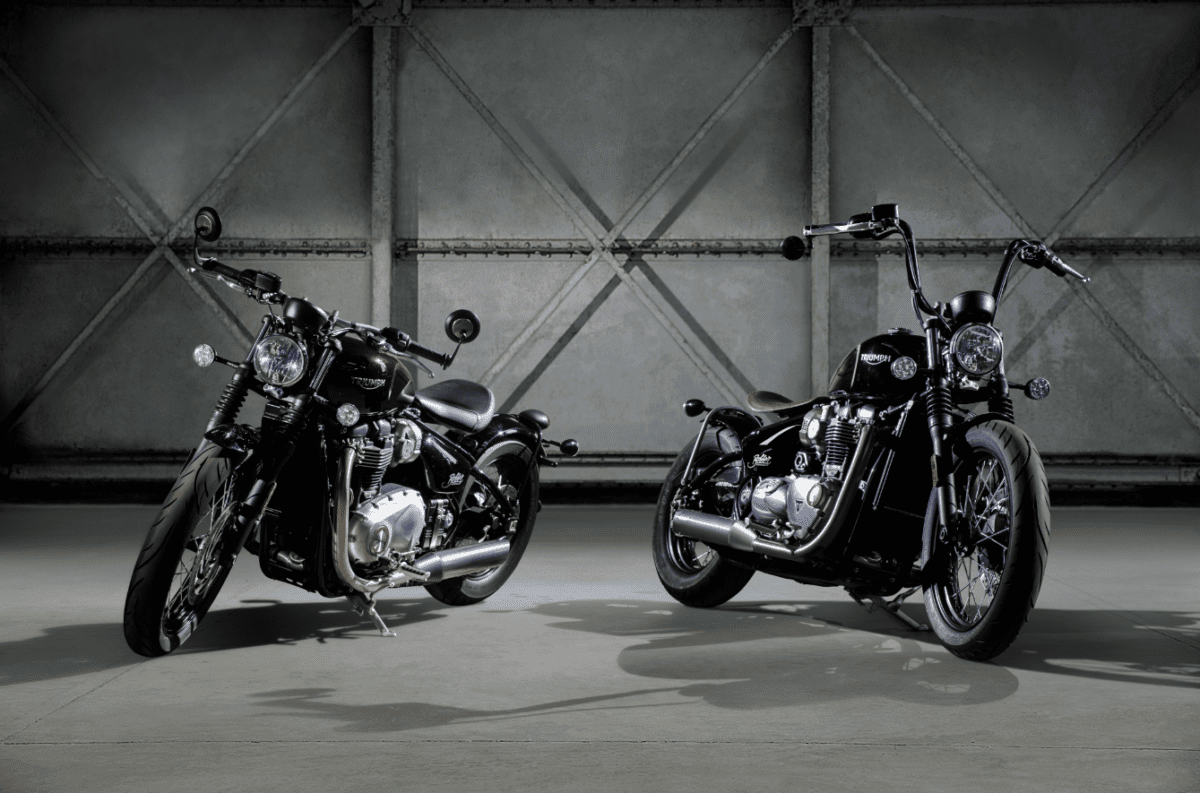 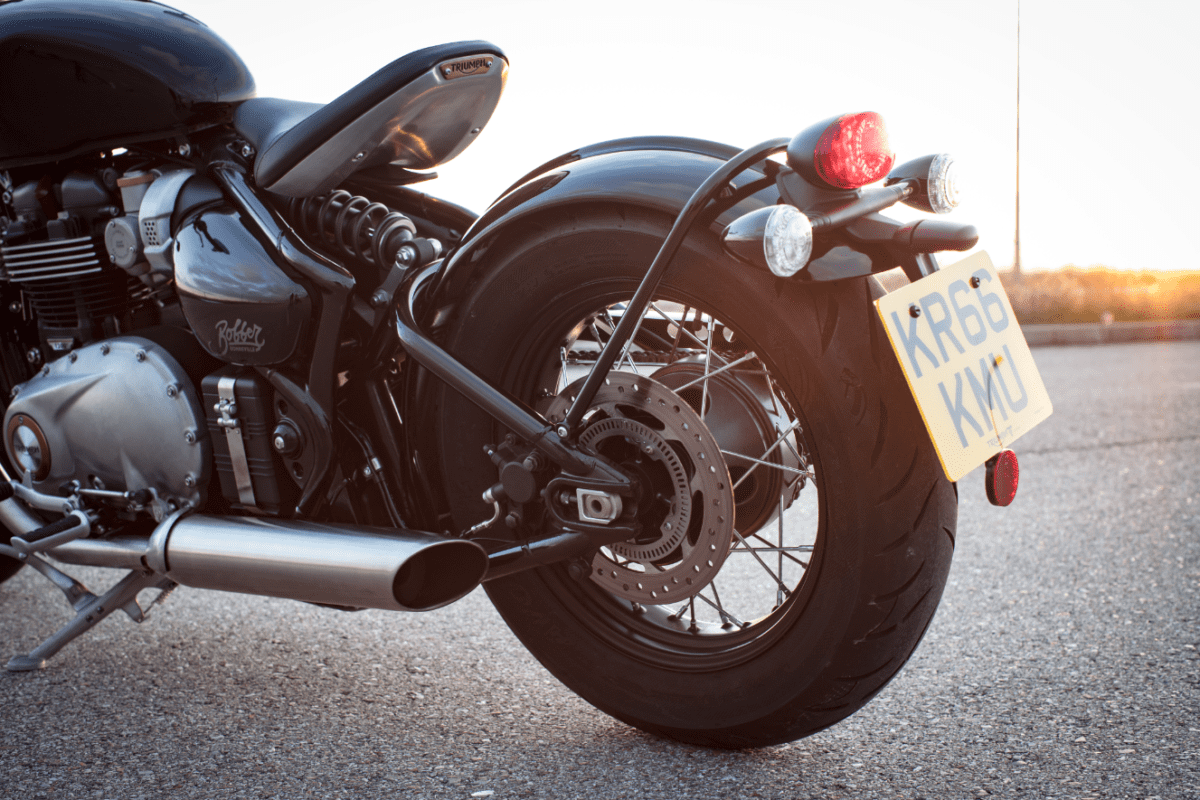 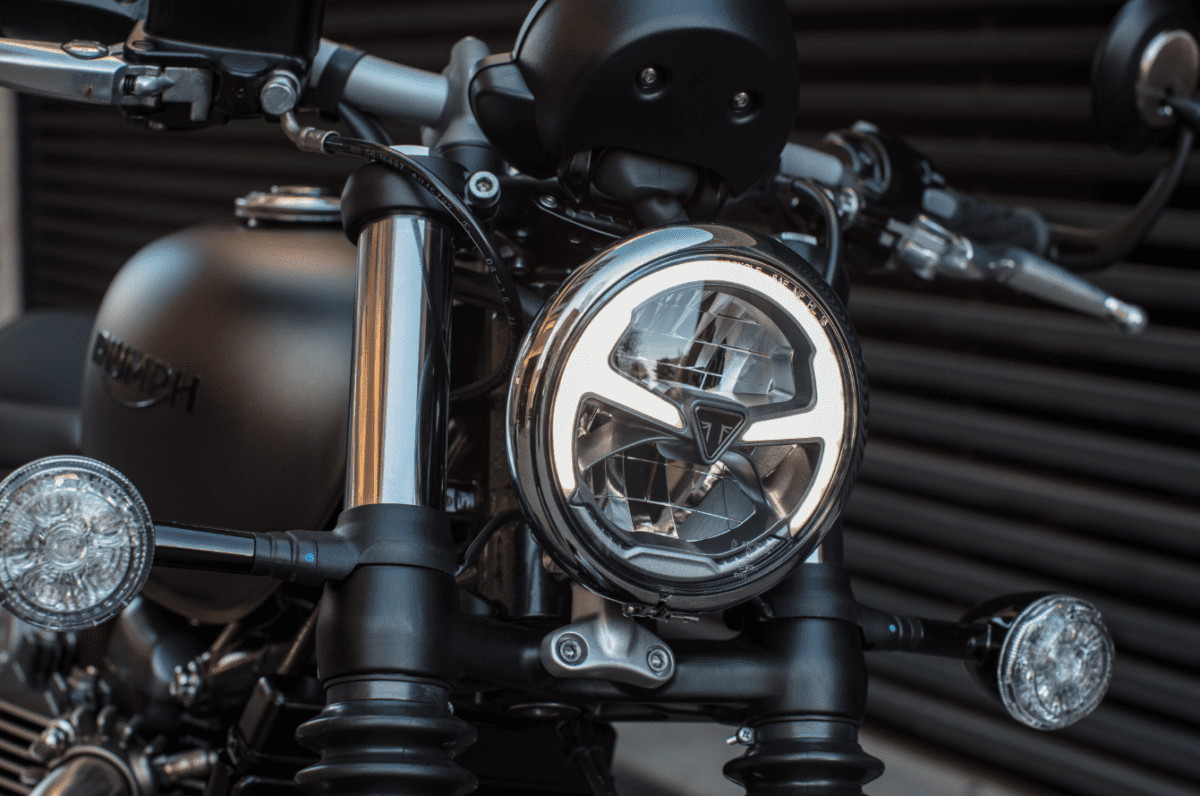