Get BOOKING for the BRILLIANT Arenacross Tour FMX events! 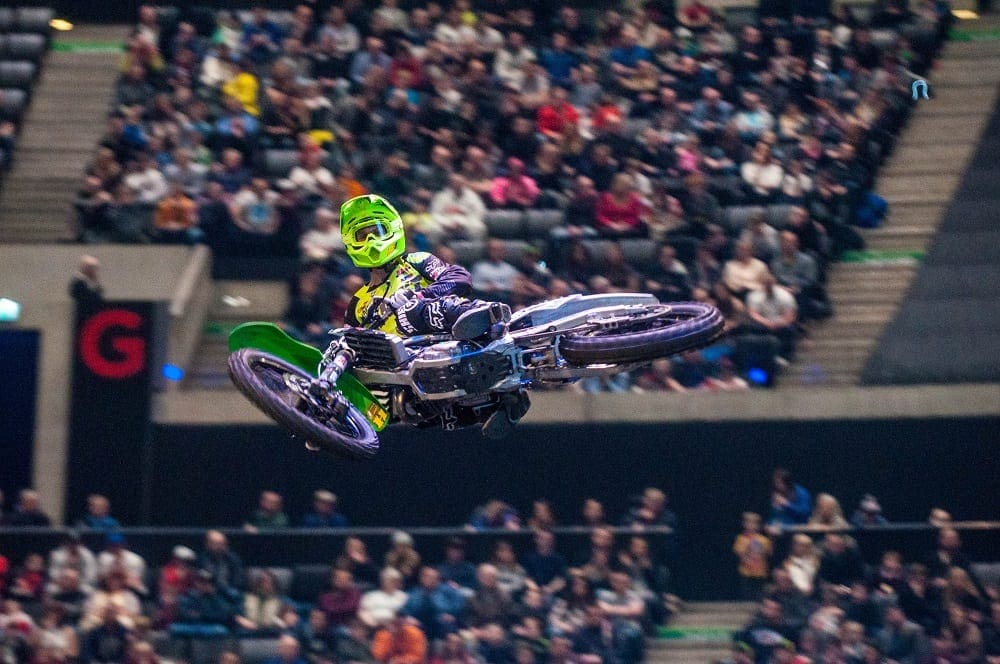 The gate drops on AX

When the 2017 Arenacross Tour powers into Manchester in January, expectations will be at an all-time high as the strongest-ever Pro and Pro Lites team line-up, packed-out youth classes and an insane bunch of FMX athletes all get ready to explode into the AX arenas and entertain the masses

Whilst many will be focussing on the prowess of reigning British MX1 champ Tommy Searle, others will speculate on the sparring between top French indoor-racing specialists Thomas Ramette and Cedric Soubeyras – will it continue? Of course, a freshly-motivated Kristian Whatley could throw a spanner in the works, as could Brits Matt Bayliss and Jack Brunell who have both been gifted a boost of confidence by signing with manufacturer-backed teams. There’s a pretty hot Aussie rider named Jay Wilson coming over to mix it with the Europeans, and a young French whizz kid, Adrien Escoffier, will be trying his chances against the AX regulars.

There’s not long to wait now to find out who will come to the fore when the gate drops on Saturday the 7th of January at Manchester Arena, but one thing is certain, there are scores to be settled. 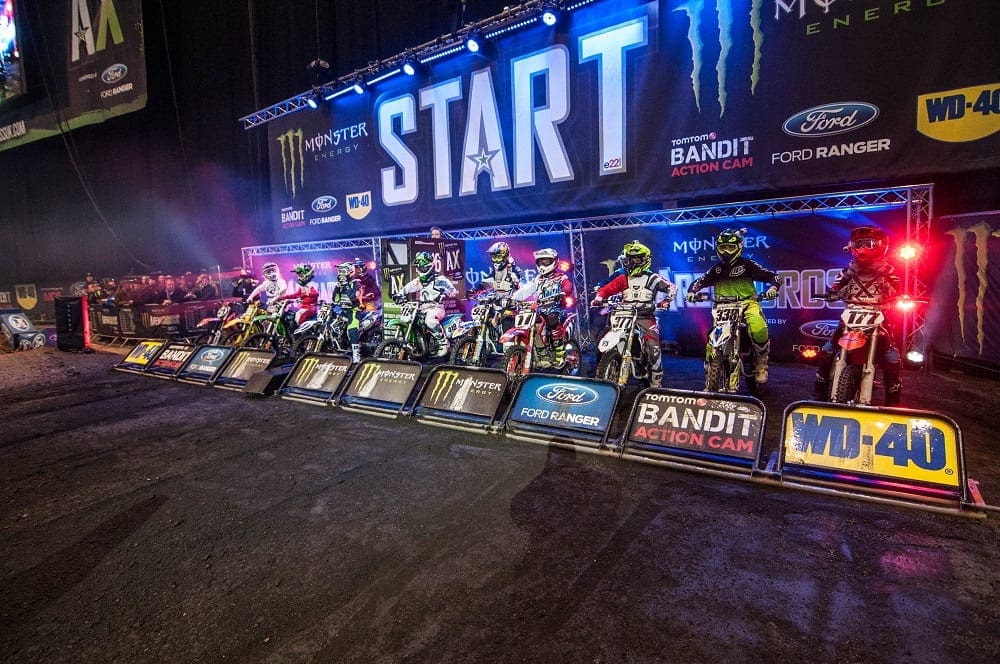 As the Arenacross Tour enters its fifth season, it has earned the support of major manufacturers. Kawasaki, and its Team Green setup, is directly entering a team with a rider in each class and lead rider Searle will contest the full series with Brunell. Dylan Woodcock will be the Pro Lites rider and Kacey Hird the Super Mini contender. Bryan Mackenzie will be the team manager.

Thanks to the efforts of Dave Thorpe, arguably the most successful British motocross racer Great Britain has ever produced, Honda will field two teams; one with its long-standing partner Buildbase Honda and the other a new partnership in the form of Keystone Honda Racing. Buildbase was set to field the 214 AX Pro chap Fabien Izoird, however, as TMX went to print, we understand he has been set back due to a collarbone injury and won’t be fit enough to make the series – DT is currently seeking a suitably fast-paced replacement. The aforementioned Matt, and his brother Chris, make up the rest of the team. Riding for Keystone is Florent Richier, Alex Snow and Joe Clayton. The first-ever Arenacross champ, Adam Chatfield, will also ride a Honda with new-to-AX, off-road specialists FRO Systems PAR Elite. The Greedy bros, Ashley and Josh, will be part of the team, but riding Yamaha.

Suzuki GB will back the two-time AX winning team of SR75 World Suzuki; the only team to return to Arenacross with the same riders, namely, reigning AX champ Ramette and his race-mate Cyrille Coulon. They will be guided by the same crew with Geoff Walker at the helm. Also Suzuki-mounted, and entering an Arenacross team for the first time with a multi-national team of Soubeyras, Angelo Pellegrini and George Clarke, is the RFX powered by St Blazey MX team; a joint initiative between leading parts and accessories trade distributor Race FX south west motocross outlet St Blazey.

MVR-D will run Husqvarna machinery piloted by Whatley and Escoffier, with 2015 AX Rookie champ Ollie Osmaston in the Pro Lites. Yamaha will be represented by JK Yamaha with MX coach Dickie Dye, as team manager, with Wilson and American Collin Jurin in the Pro class, and the 2012 French Junior Supercross champ Yannis Irsuti, in the Pro Lites. Shocktech will also support an AX team with Romain Biela and another Pro rider, yet to be announced, together with Bradley Wheeler in the Pro Lites.

The Arenacross prize purse is mega and probably the biggest in the sphere of UK-based off-road racing. Across just seven race evenings, the overall prize money pot is £200,000 which just has to be a massive incentive to all Pro riders and Pro Lites alike. Over the course of the series, the Main Event fund for individual Pro riders will be £80,675, there’s a Team fund of £43,925 and new-for-2017 the Pro Lites (under-23s) can win money with a total cash pot of £15,400.

Such earnings are unparalleled in this scene, particularly in the winter months, and in such a short time frame. What’s more, it sounds like it’s the same across the Channel as, when interviewed earlier in the year, 2016 runner-up Soubeyras said he earnt more in two months of Arenacross, than he could racing for eight months in French championships. 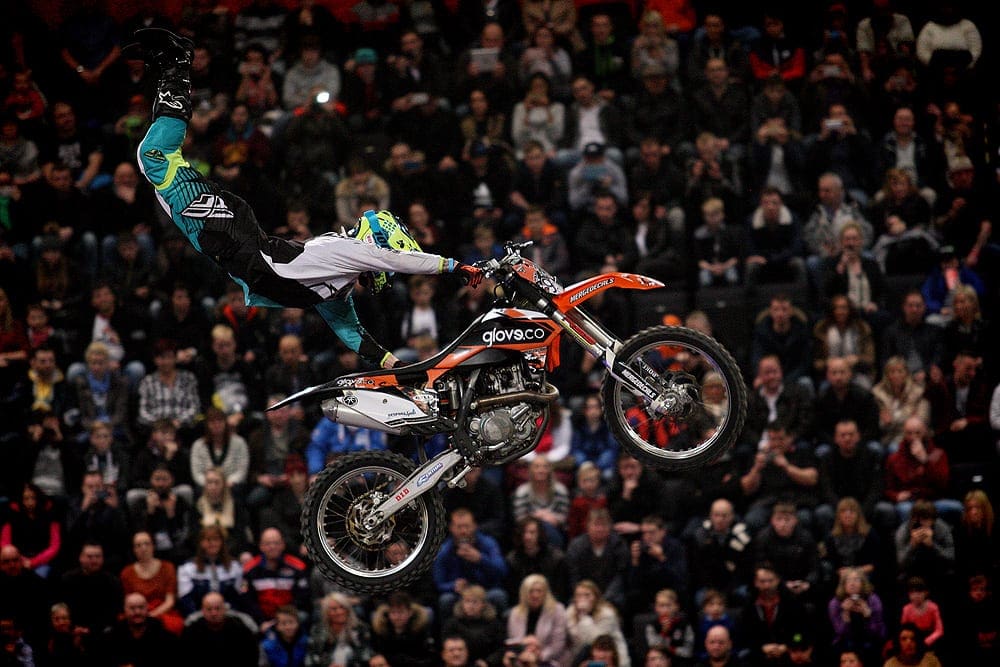 Away from the racing line, the Freestyle guys indulge in plenty of showboating with three shows per night.  The team behind Arenacross spare no expense when it comes to bringing the best from Europe, and beyond, to star alongside an impressive string of British FMX talent.

The guys will again be headlining, and delighting AX audiences. They’ll twist, whip and flip their bodies and machines through three incredible sets. They’ll perform their aerobatics some 40’ above the track, spanning a gap between two ramps of over 20’, and without a safety net in sight. The Arenacross Tour Freestylers include the one and only showboating, banana-faced Spaniard Edgar Torronteras, too-tall uber-cool Czech Petr Pilat, super-smiley Aussie Steve Sommerfeld, high-flying back-flippin’ Jamie ‘Squibby’ Squibb, huge-side-flipping, fluro-clad Nez Parker and the former Britain’s Got Talent semi-finalists; ‘Muscles’ Dan Whitby, ‘The Joker’ Samson Eaton and ‘Babyface’ Aaron Powley who together make up the unique Lings Honda Bolddog team – when these guys get into the ‘train’ anything could happen…

Of course, it doesn’t always go according to plan, but that’s what makes the Arenacross Tour so spellbinding – literally anything could happen. Could Dan Whitby miss his landing when he jumps in the dark? Could Squibby get over exuberant? Could Edgar look back too far? Who knows… If you don’t know your KOD (Kiss of Death, of course…) from your Rock Solid or Tsunami, it really doesn’t matter as master of ceremonies Christian Stevenson, aka DJ BBQ, is always on hand to guide the Arenacross audience, and he usually has his own bent on a few of the Freestyle trick names.

A new feature for 2017 is that the Pro Lites riders, formerly known as Rookies, will be an integral part of a Pro team. This is a great opportunity for the likes of upcoming racing stars, such as Clayton, Clarke, Woodcock, Bayliss, Greedy and the rest of the guys, to step up to the plate and get a taste of working with the Pro riders, and within a professional team set-up. They experienced a little of what it’s like to be a team member when they attended the AX launch at Motorcycle Live at the NEC recently, when they were involved with team photo shoots, filming, media interviews and the like.

The Pro Lites racing was intense throughout the entire 2016 series. Clayton cleaned up but, looking at the 2017 line-up, he’s got some stiff opposition heading to the gate next year. Clarke gave him a run for his money at every round earlier this year and he’ll be hungry for some race wins. Woodcock is currently out in California practising with Searle, so he’s going to be raring to go, and he’s already enjoyed AX success, winning the small wheel 85cc class in 2013. Chris Bayliss is buoyed at the racing lifeline he’s been thrown to ride in a ‘factory’ team and be mentored by Thorpe; he’ll be out to prove that he’s worthy of that investment. Josh Greedy will be hoping that ‘school’s out for ever’ and that he can mix it with the top runners, and Osmaston, who won the Rookie class in 2015, could really shake it all up.

These guys look the part, should benefit from being around the more experience Pro riders and, with a pot of cash to fight for, there’s never been a better time to be a Pro Lites rider at Arenacross. 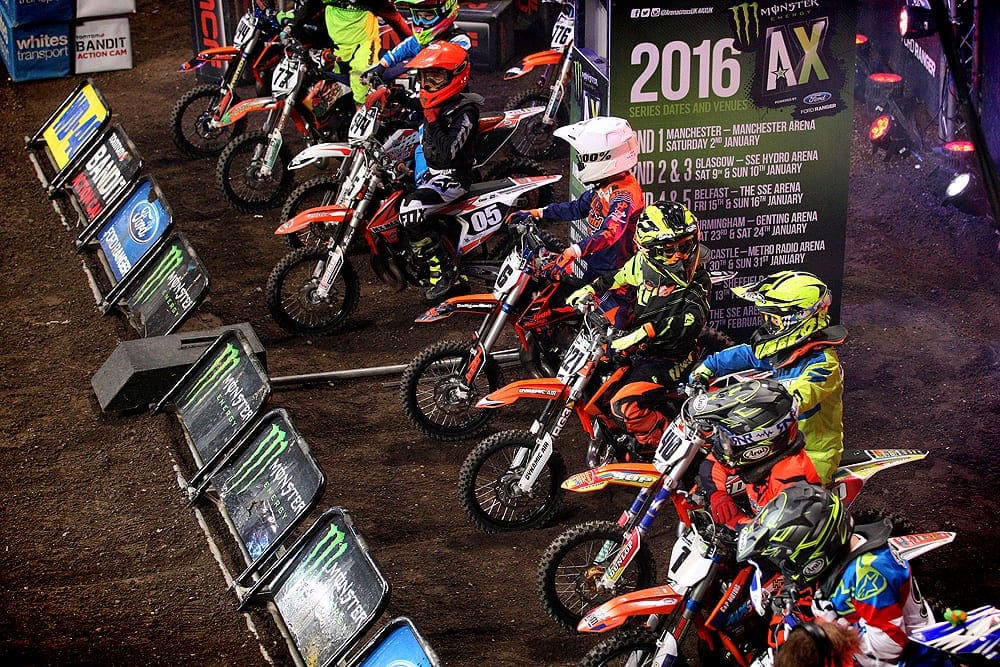 Race on Saturday, school on Monday

One of the elements of the three-hour show that makes Arenacross that little more special is the inclusion of racing for younger riders, from the age of seven. This is a segment of AX that is growing in popularity, not just with spectators, but with the mini competitors and their families too. Such is the interest in the 85cc Supermini class that the MC Federation, AX’s organising body, has had to hold a reserve list for 2017, and there’s no shortage of riders in the 65cc category too. 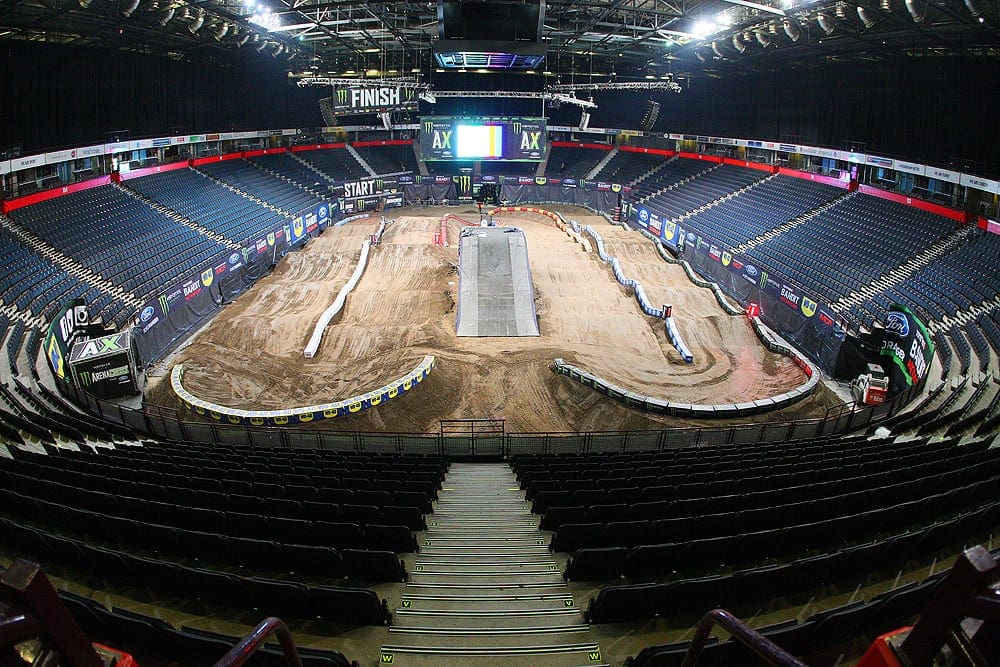 The Arenacross tracks are crafted to perfection by the team from JB Tracks, the same outfit that owns top motocross circuit Cusses Gorse. AX fans and riders demand the most radical and technically-challenging tracks ever to grace a concert arena, and JB delivers. You may think it’s easy. Bung in a load of dirt, get a few diggers and men with spades, dress it up with tuff blocs and banners and open the doors! Well, we’re reliably informed that these things take months of planning and, even when the crew are happy with the plans, there are always a few last-minute tweaks required and, once on site, it doesn’t always go according to plan. Each arena is unique in terms of dimensions, and the team build different aspects to suit each arena individually. Here, you can feast your eyes on the Manchester track plan which, astoundingly, the guys have managed to make 25 per cent bigger for 2017.

Motocross isn’t commonly associated with VIP hospitality packages but then, Arenacross just isn’t that common. There’s a three-tiered ticket enhancement on offer suitable for all budgets.

Standard ticket holders can ‘boost’ their standard-priced ticket for just £10 for children/£20 for adults and enjoy a track walk, meet and greet the riders and get a Tour programme.

Taking the whole experience up a notch, but still affordable, is the Gold package with tickets costing £49 for a child and £99 for an adult. This provides the highest-priced tickets in the arena bowl with track walk, meet and greet riders, free merchandise and programme, paddock visit and info pack prior to the event.

For those looking to push the boat out and treat the family and friends to something really, very special, the Platinum package, priced at £199 adults and £99 children, provides all the Gold benefits together with an exclusive VIP suite/box or best ticket, exclusive VIP entrance, cloakroom, car parking and WiFi at selected venues, catering, drink on arrival, and lanyard with exclusive card pass. 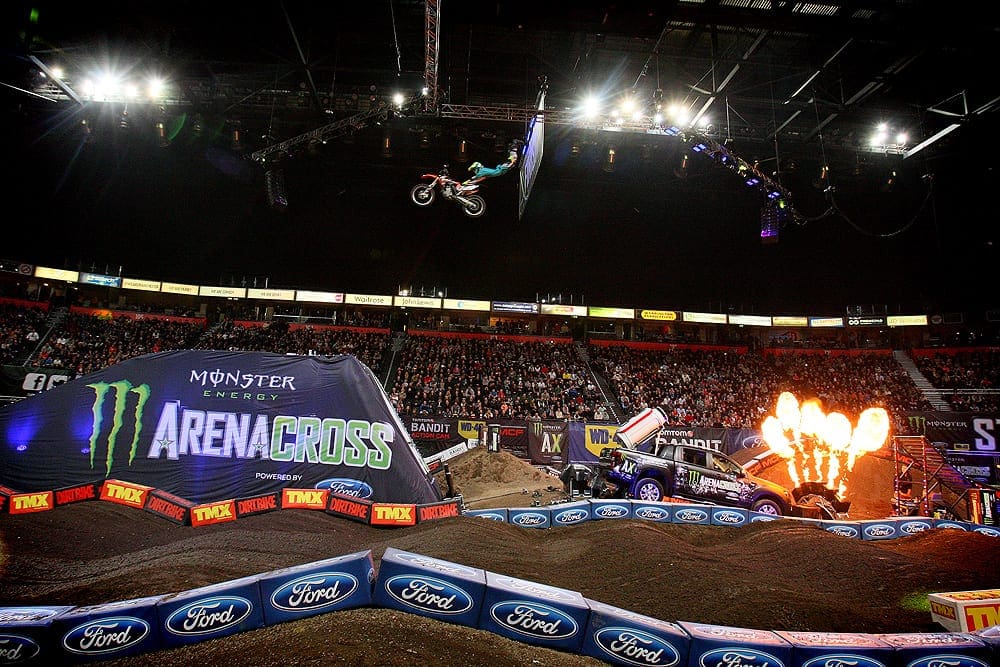 For more information and to buy tickets go to www.arenacrossuk.com or call the box office on: 0844 338 8000