The iconic Triumph Scrambler is back, reincarnated as the new Street Scrambler

The Street Twin has been the best-selling bike in the 2016 water-cooled Bonneville range, so it was only a matter of time until Triumph added more flavour to the accessible end of its modern classic range. Enter stage the Street Scrambler, the latest reincarnation of the iconic Bonneville Scrambler.

All the ‘Street’ Bonnevilles (the Street Twin, Street Cup and Street Scrambler) share the same 900cc liquid-cooled parallel twin engine, many chassis components and the good looks that run in the Bonneville family, but Triumph insists the new bike is more than just a makeover with accessories bolted on the existing Street Twin. Key changes include dedicated suspension units and a set-up to achieve a new purposeful geometry, as well as different bars, foot pegs and seat to adjust the riding position. 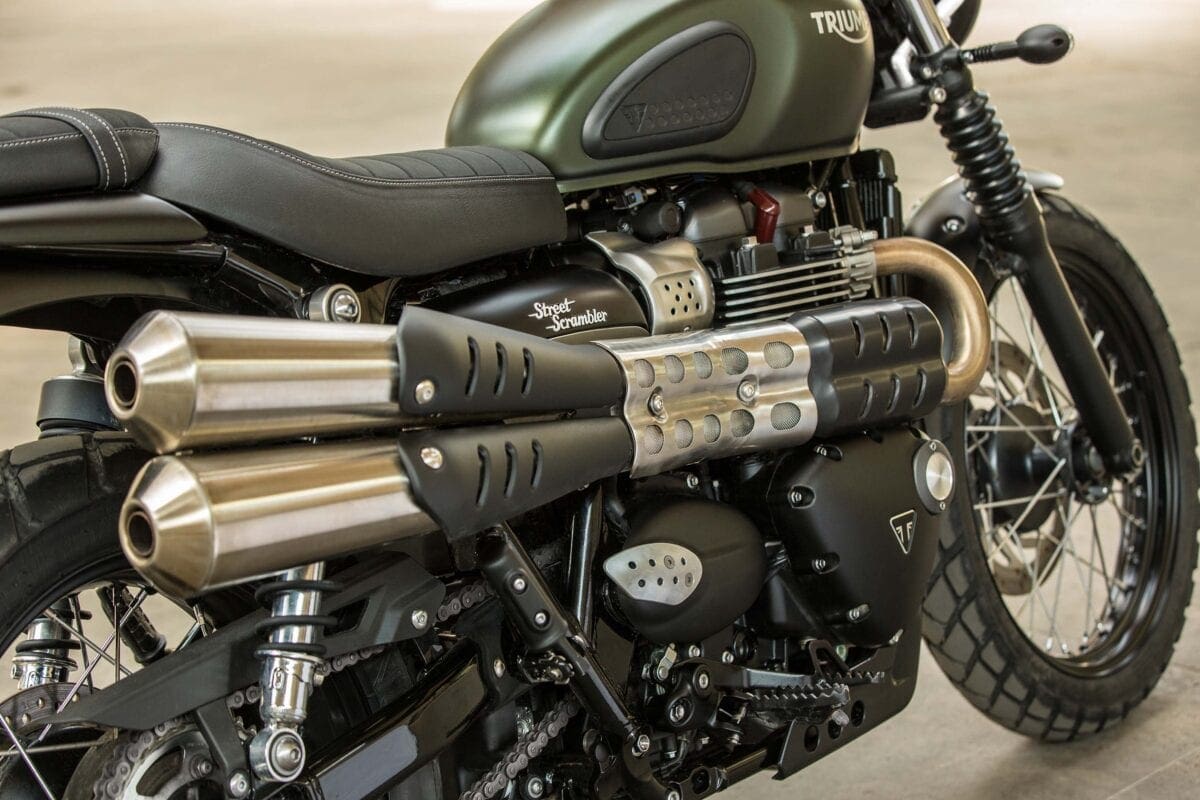 Like the Street Twin and the Street Cup, the Street Scrambler is also designed to be accessible, smooth, agile and unintimidating to new and inexperienced riders, and it also comes with the option to restrict it to meet the A2 license requirements.

The Street Scrambler shares its engine, silhouette and many of its components with the Street Twin, but has a different geometry to the stock bike, due to its larger 19-inch front wheel and dedicated suspension. Rider ergonomics have also been revised, with the high and wide bars, new seat unit and foot pegs.

In terms of looks, Triumph has nailed it with the Street Scrambler. It features spoked wheels, a long seat (with interchangeable pillion seat and aluminium rear rack that come with the bike), knee pads on the tank, and of course, the iconic Scrambler twin exhaust, with both pipes running high on the right side of the bike. All of these combine to create a bike that looks useable, accessible and retro cool at the same time (pretty much what the Triumph design brief must have been). Despite the old-school appearance, there’s plenty of clever engineering that has gone into making this a thoroughly modern bike. Take the exhaust for instance: the Triumph engineers have managed to hide the catalyser box behind the heat guard near the header pipe to meet the new emissions regulations. At the same time the new exhaust is 2.5kg lighter than the old one.

As you jump on the bike, it feels relaxed and natural right from the start, with plenty of leg space, a comfortable seat and the wide handlebars creating a commanding riding position. The new seat is narrower and lower than the old one, and most riders will have no issues with planting their feet firmly on the ground.

In urban environments, the Street Scrambler handled roundabouts, speed bumps, cobbled streets and potholes without a problem. The same torque-assist clutch is incredibly light to operate, and the torque engine pulls so effortlessly from a standstill that you need one eye on the speedo to stop the police taking too much notice. The bike also feels lighter than it really is (213kg dry), and so well-balanced that there are no fears of wobbles.

Moving onto bigger roads, the larger 19-inch front wheel adds stability to the bike, making it more manageable at high speeds than the Street Twin or the Street Cup. There’s no screen or other weather protection and no heated grips (although these are available as accessories), which made for chilly riding on the highways in the morning when the temperature struggled to climb up from 2°C. 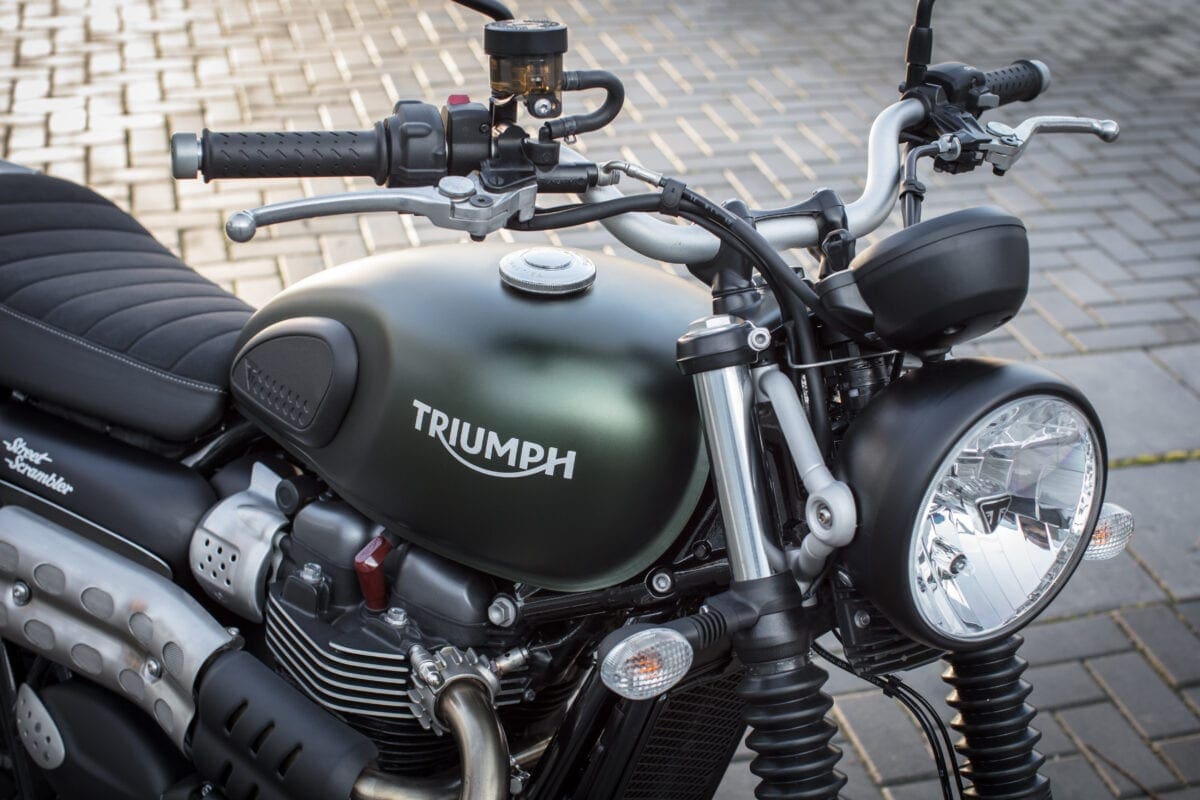 Once we were off the main highways, and on the twisty back roads, the Scrambler pulled another ace from its sleeve. It attacked the corners with steady purposefulness, cutting precise lines through fast bends.

Although the two bikes share the same engine and peak power and torque figures, they are reached at marginally different points on the rev range due to the different exhausts and therefore slightly different tuning. The Street Scrambler peaks slightly later in terms of power with the 54bhp peak at 6,000rpm, but the maximum torque of 80Nm is available slightly lower in the range at 2,850rpm. In practice, you can’t really tell the difference.

The brakes, which are shared between the two new bikes, aren’t the most powerful on the market, but the feedback from the front brake with a two-piston floating caliper and a 310mm single disc is good. With the switchable ABS on, you can squeeze the lever hard to bring the bike to a stop.

We had the chance to do a bit of light off-road work on the Street Scrambler. With the traction control and ABS switched off it’s easy to spin and slide the rear without feeling completely terrified. And with the low seat height, it’s easy to get your foot down if needed. The torquey engine also means that if you want to take it a bit easier, you can use a higher gear and still climb the hills without the rear wheel spinning madly.

The Metzeler Tourance tyres that were fitted on our test bikes were excellent both on and off Tarmac. There was a surprising amount of grip on asphalt given the blocky profile, with no vibrations or shudders. On the dirt track the tyres coped perfectly well, but for more demanding trail riding, proper knobblies would be essential.

The new Street Scrambler costs £8,900 for the black model. It’s an additional £125 for the green version, or an extra £300 for the red and silver one. But for me, this is the more versatile and fun bike of the two. It’s a bike that you can see yourself jumping on just to go to the corner shop – and maybe taking the long way there! 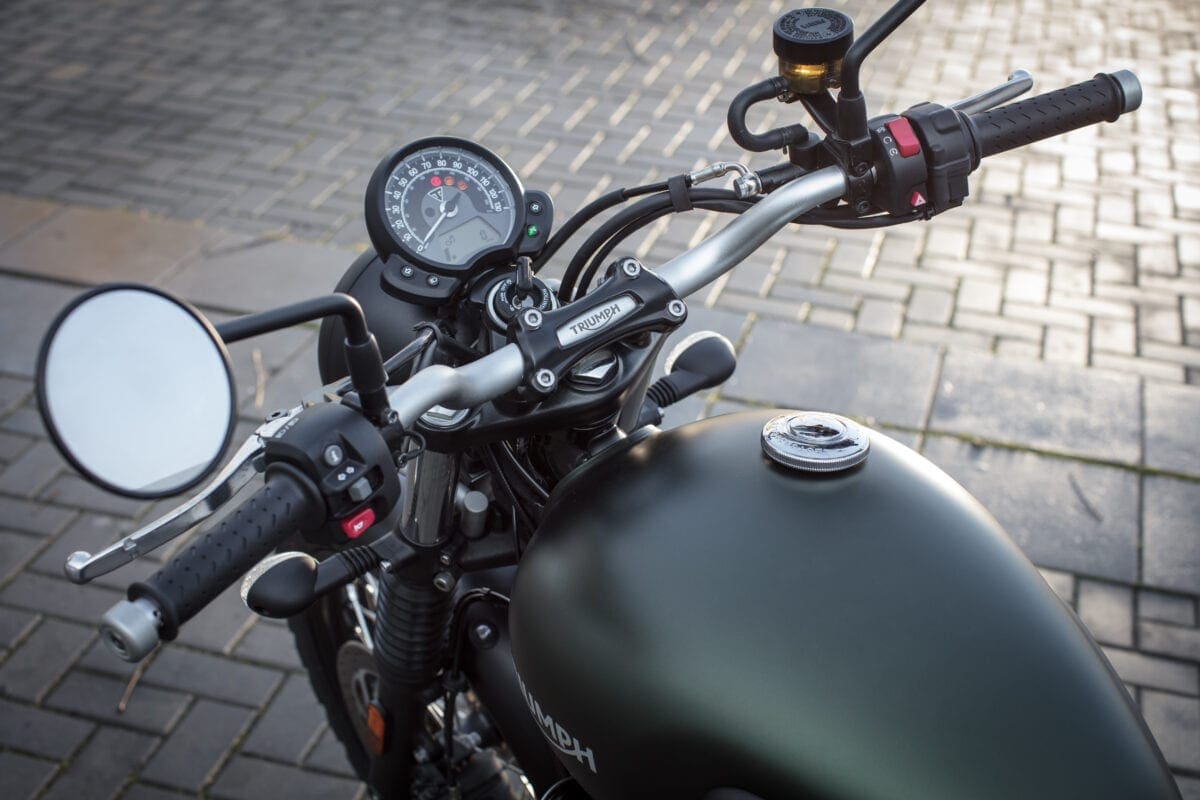 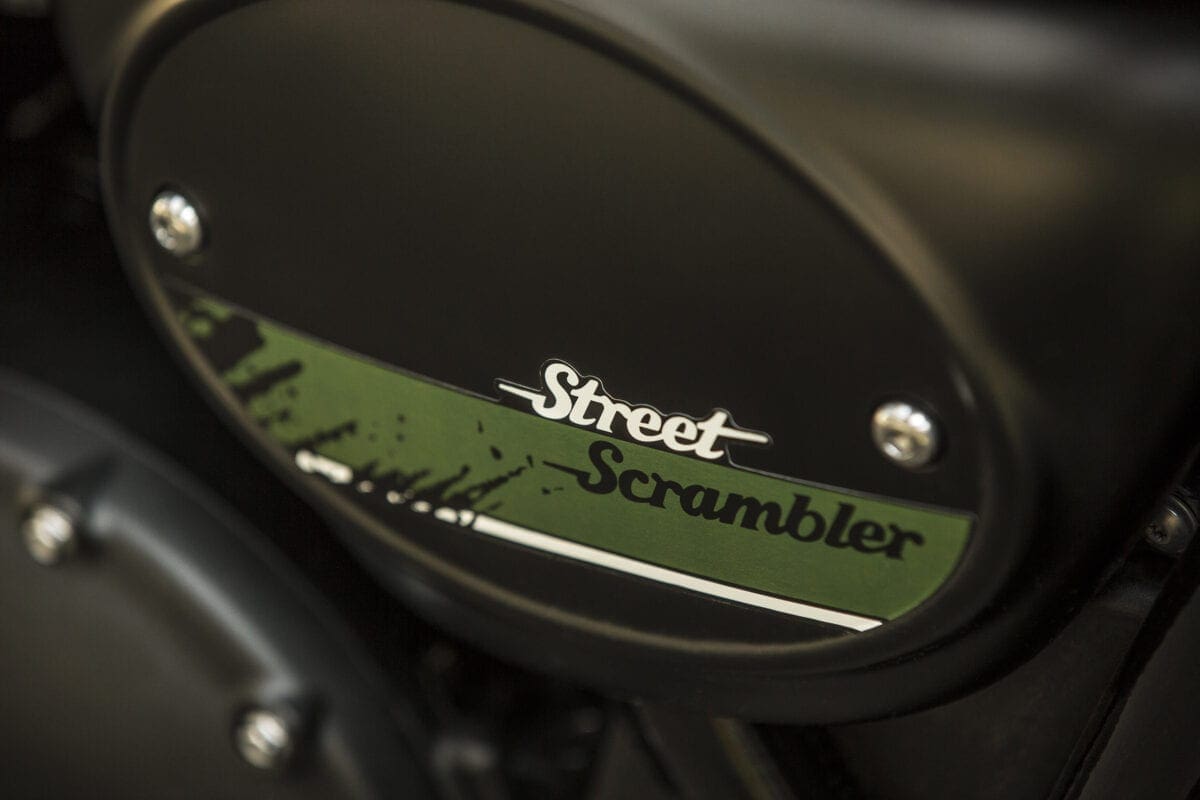 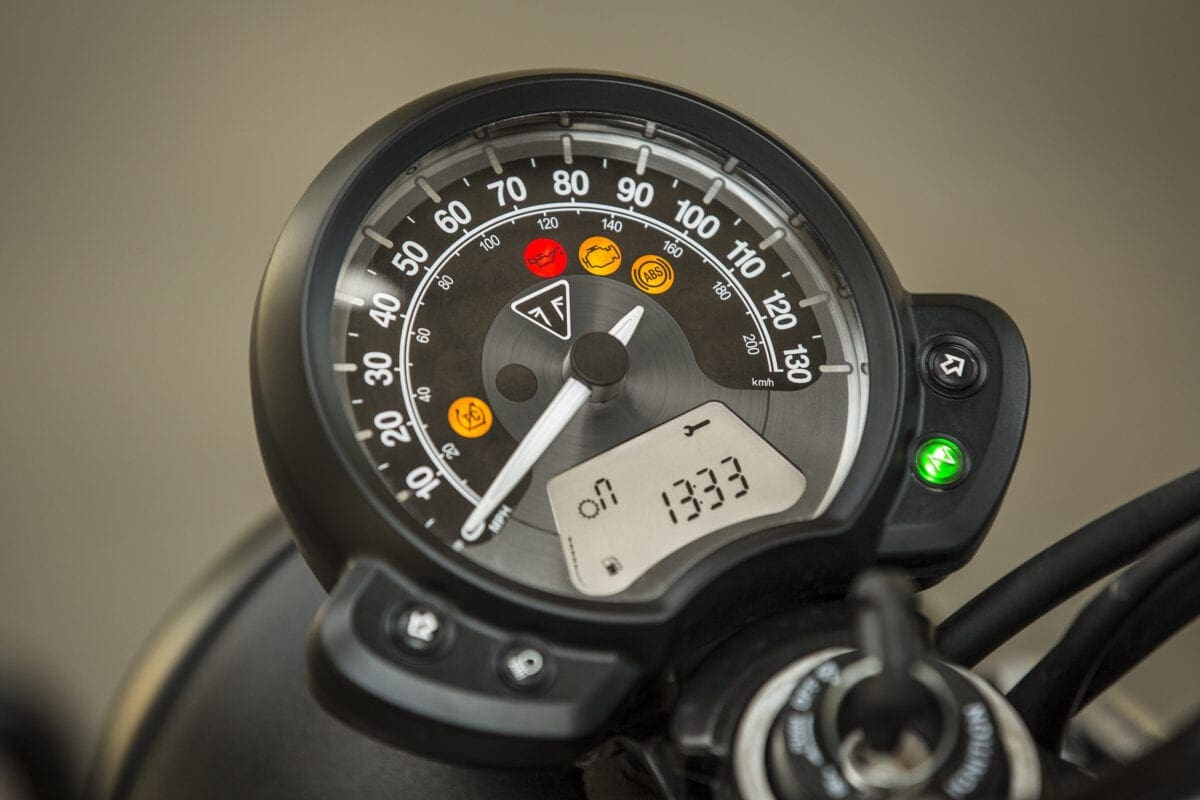 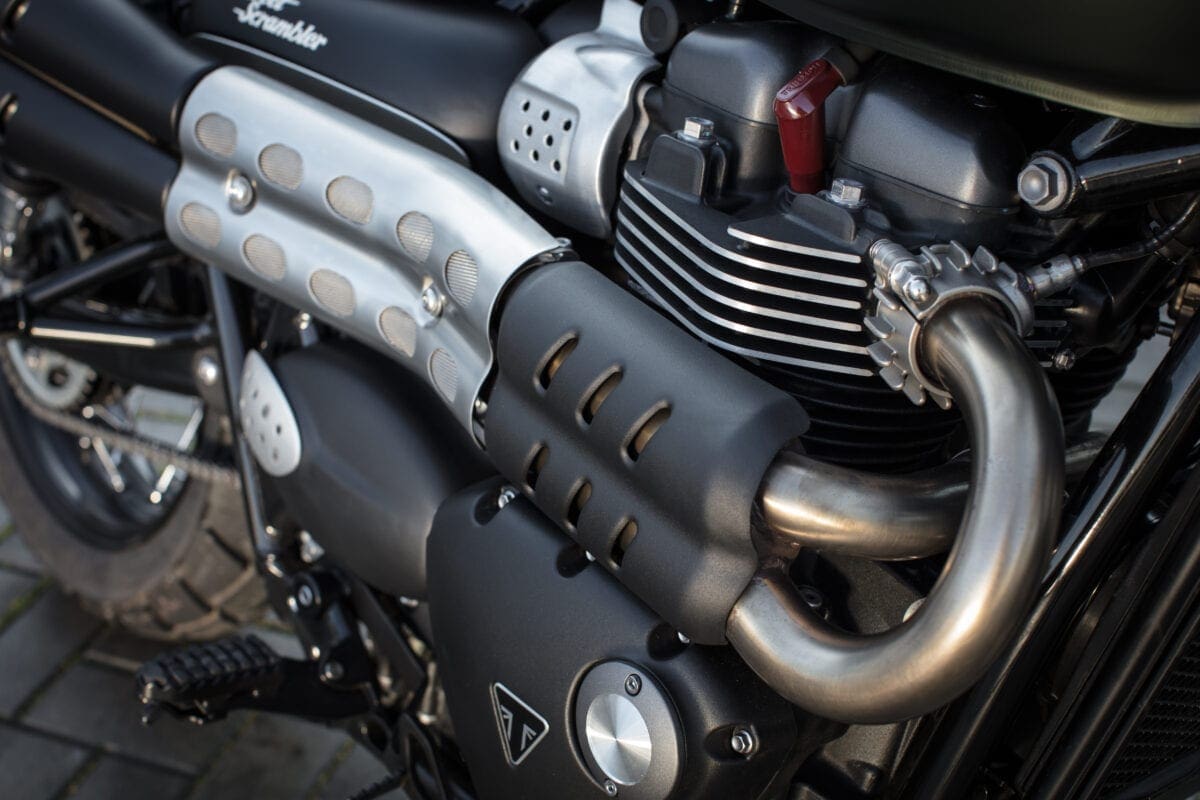 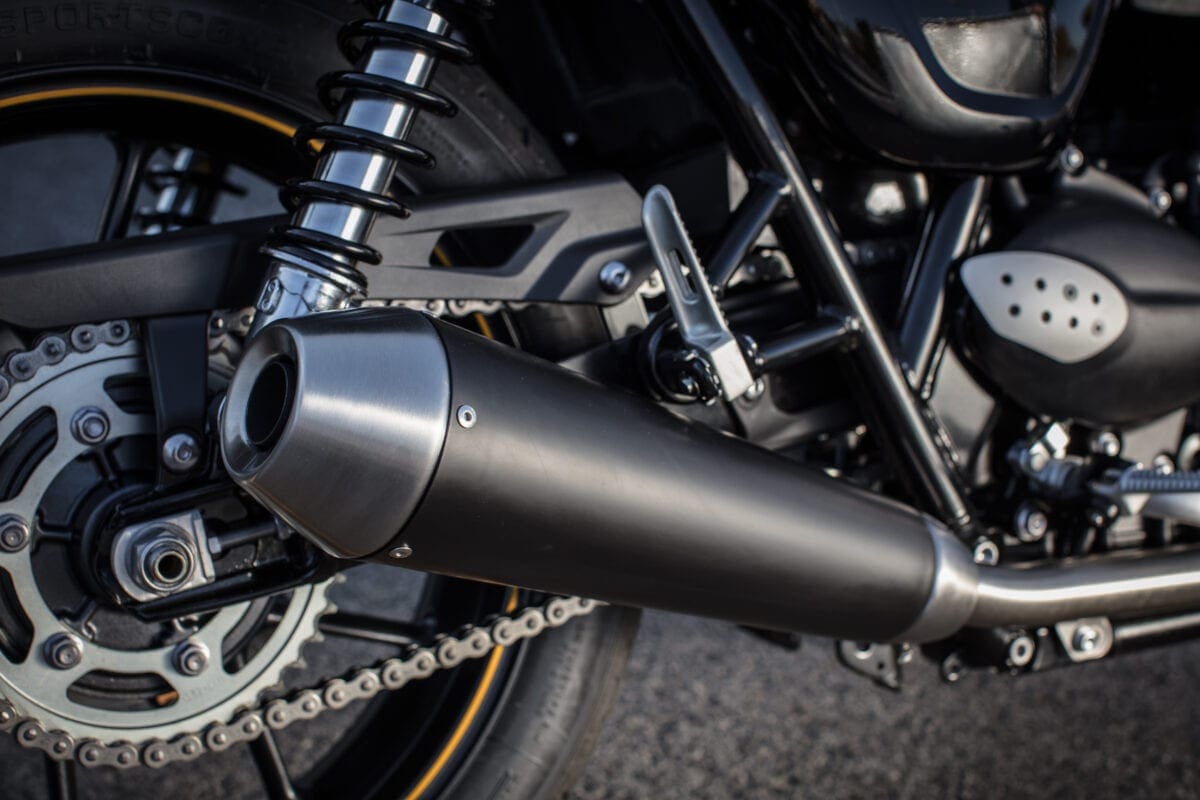 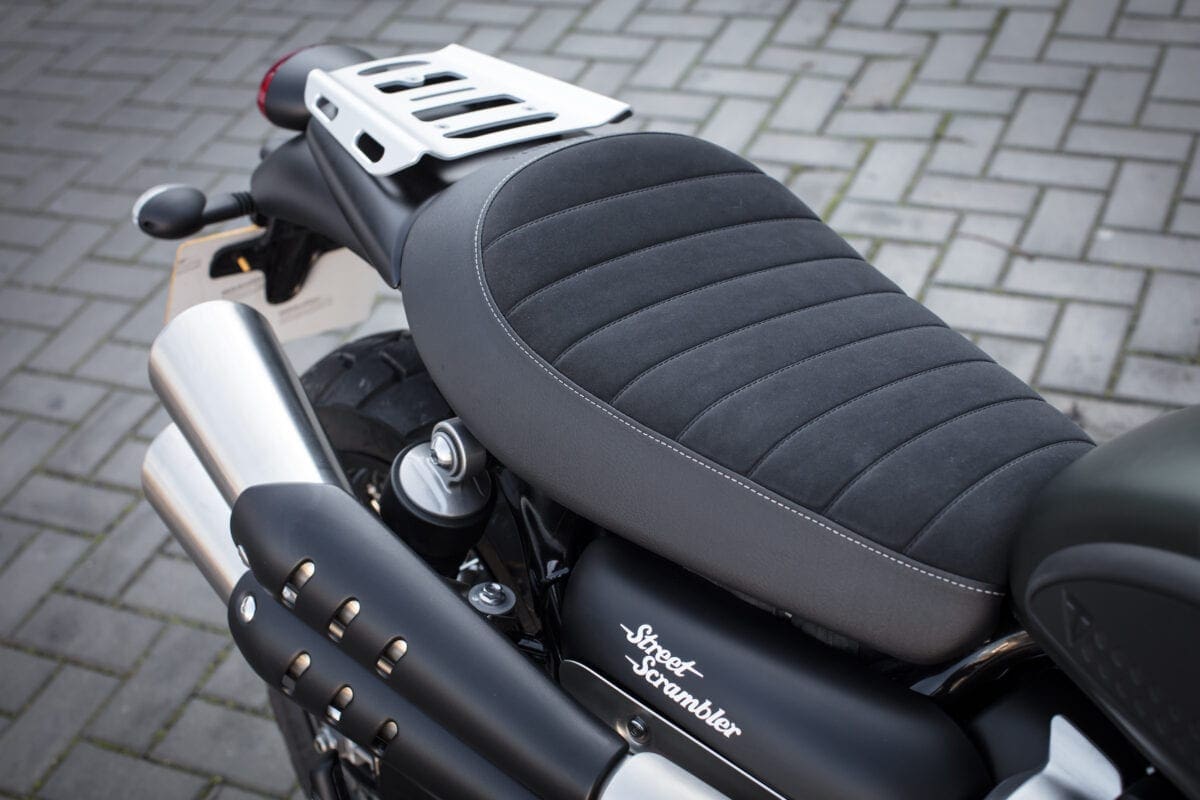