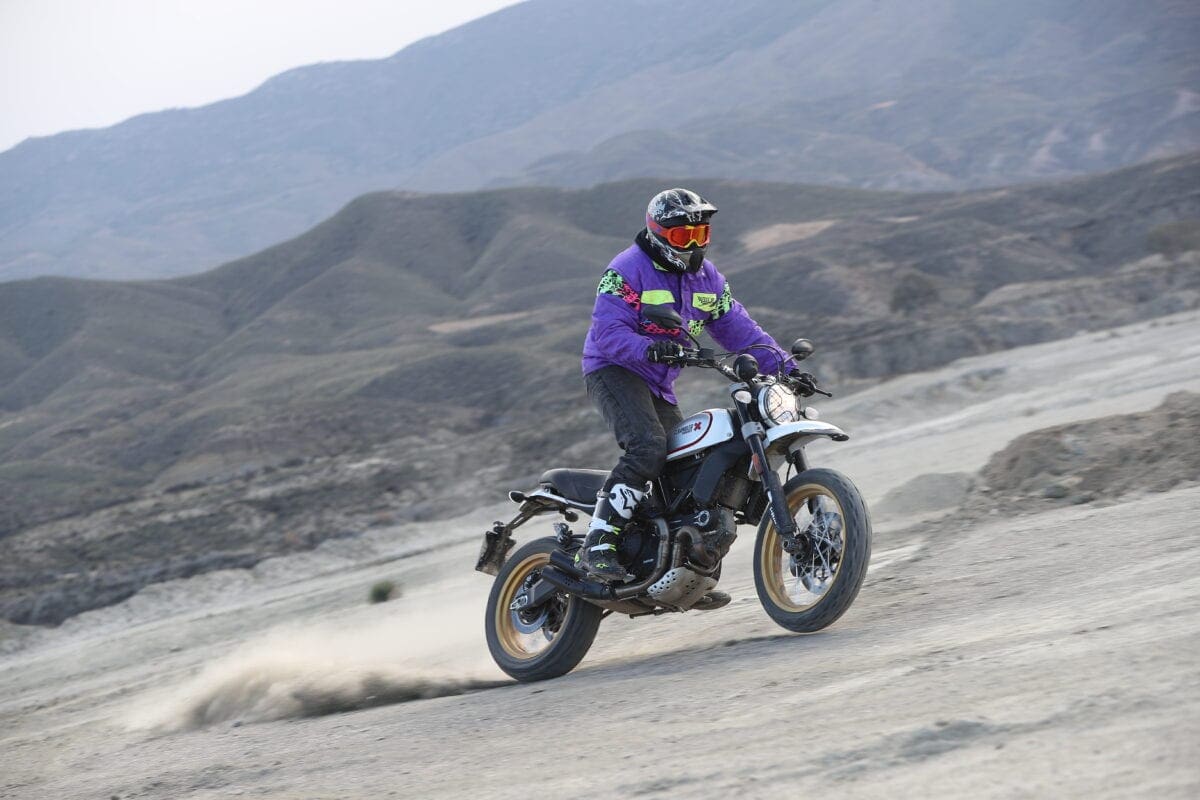 Just days after Ducati announced another record-breaking year for the Bologna factory in 2016, we were riding a new version of its pivotal sales success in Almeria, Spain. The Scrambler family has sold 32,000 units during the first two years of existence (roughly 16,000 each year) and ensured Ducati featured in the global top-ten for the first time in 2015. And now, with the Desert Sled, the Scrambler dynasty has something completely different to offer to the masses.

Strangely, ‘Desert Sled’ isn’t Latin for Yamaha XT. The term, apparently, originates from the USA in the 60s and 70s, where heavy 500cc+ bikes were modified for desert sorties. Ducati was also keen to mention its victory in the 1969 Baja rally during the press briefing – there was a tangible sense of off-road importance to this presentation, which was a good thing considering the ensuing test parameters.

This isn’t just another Scrambler derivative with token amenities. To cope with stresses and strains of off-roading, the steel trellis frame features extra tubing on the left that runs parallel with the shock mount. There’s also additional beefing-up and structural reinforcing around the swingarm pivot to reduce unwanted forces on the engine. More perceptible changes include a 19-inch front wheel, and tawdry 41mm non-adjustable forks from previous Scramblers have made way for all-new fully adjustable KYB 46mm forks – likewise, a new shock. Both ends boast a hefty 200mm of travel, and wheelbase has been lengthened by 25mm to 1505mm for grip and stability. 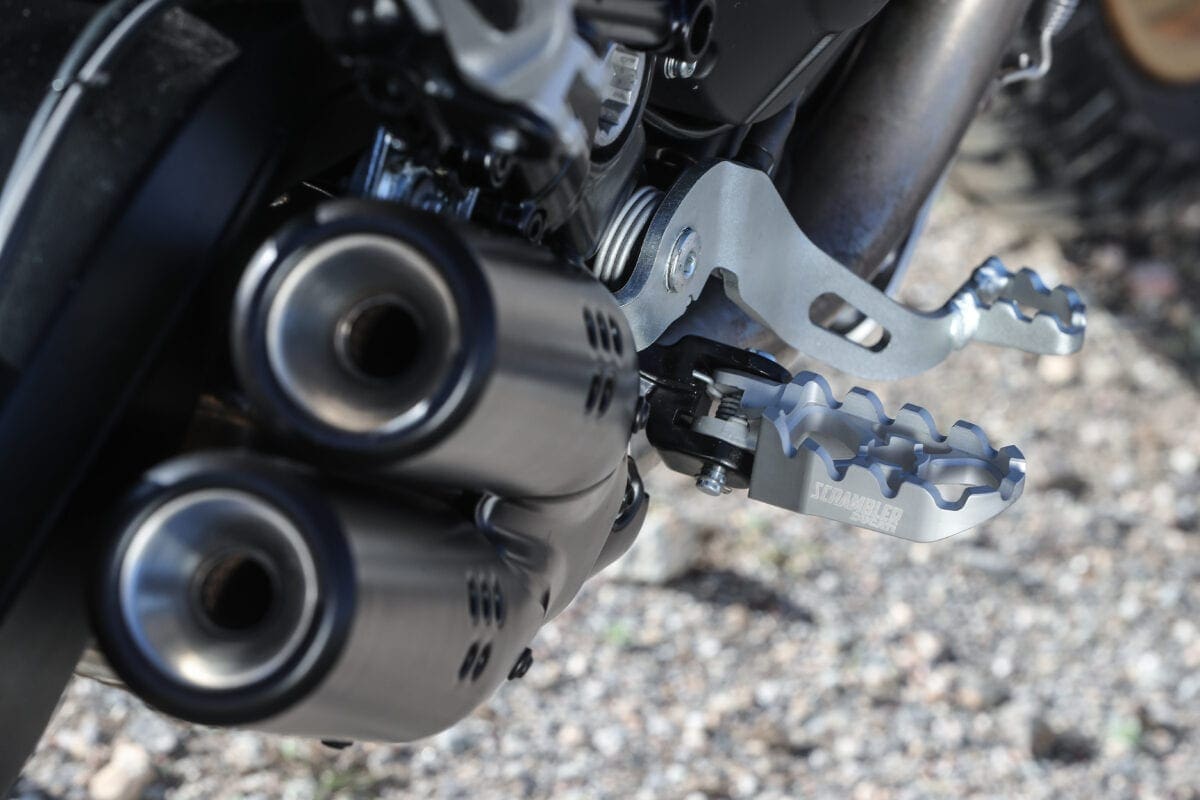 While the Scrambler range has proven to be a popular platform for entry-level riders and whimsical urban types, the diminutive stature has often deterred man-size pilots. Ducati’s original target demographic – somewhat older than anticipated – proved drastically wide of the mark. Bologna’s engineers have raised the Desert Sled’s saddle to 860mm (there’s also an 840mm option) but that shouldn’t discourage the vertically challenged among us either. The Desert Sled’s all-new saddle is thinner, particularly at the front, and its new suspension is much softer for obvious reasons, offsetting the higher seat with a comforting amount of sag when mounting.

Ducati claims the 803cc air/oil-cooled L-twin brags identical power and torque figures as before, despite Euro4 compliancy, and no internals were altered in the process – only exhaust catalyst and canisters are new, plus necessary ECU tweaks for emissions. There’s a joke in there somewhere, but… 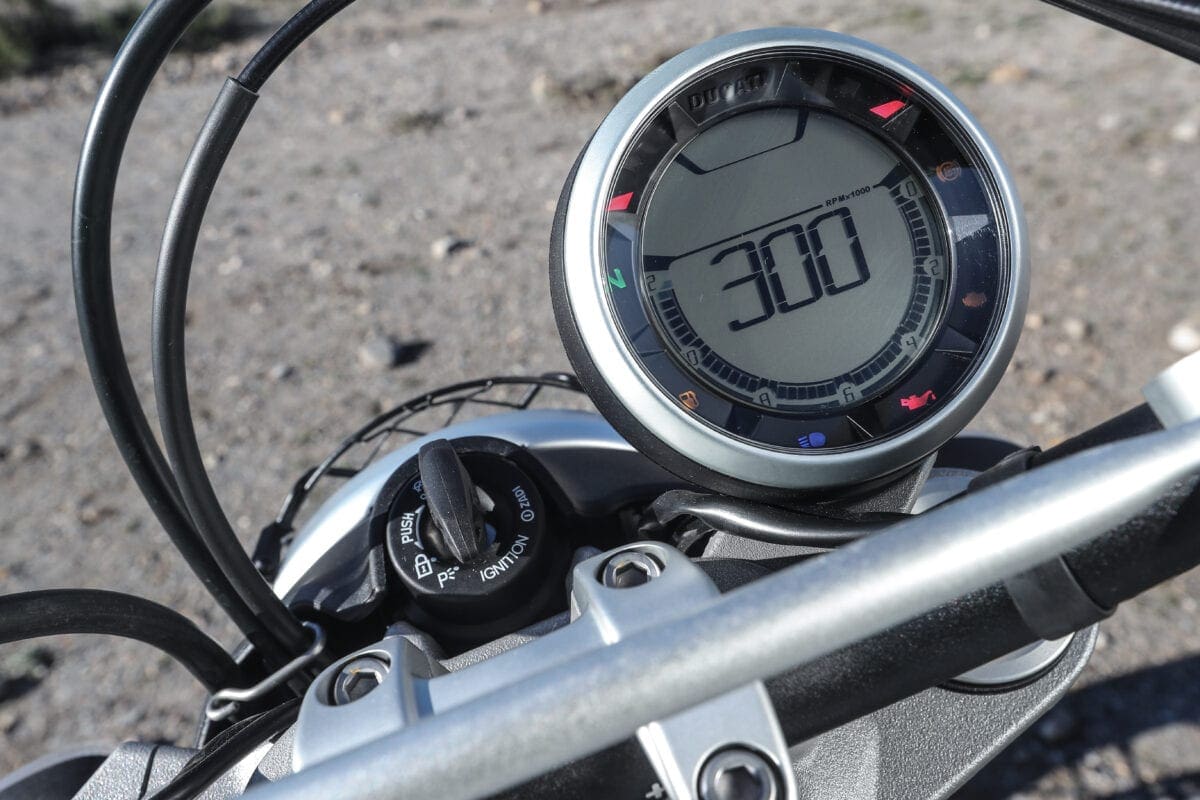 Given its heritage and inspiration, it was no real surprise that Ducati chose a desert to launch the Desert Sled – more specifically, a spaghetti western locale in the mountains surrounding Sierra Nevada. With scant detail on the test ride, we were told to bring off-road boots and suitable attire, and I was soon glad I packed my Alpinestars Tech10s. Meandering out of the launch venue on dusty tracks, the Desert Sled’s new handlebars and grown-up ergonomics were immediately palpable, akin to a motocross bike’s riding position with plenty of room to manoeuvre around the cockpit. My only dispute I had with ergonomics was the protruding trellis frame fouling my right boot in search of the rear brake lever, which only truly came into fruition when panic braking later in the day.

Those opening stages to our relationship highlighted that it still feels very much like a Scrambler, only a more spacious and friendlier version. Regardless of the Sled’s abundance of aforementioned upgrades, perhaps the most pertinent was its new throttle action. A progressive cam situated in the throttle housing provides a vastly softer response during initial openings, culling power and softening the ceremony. Previous Scramblers were renowned for their abrupt delivery, which often unsettled the bike in stop/start urban climes. The Desert Sled is infinitely smoother, allowing the power to be smothered on any surface beneath. Despite provocation, not once did I wish for traction control or any other form of electronic assistance. 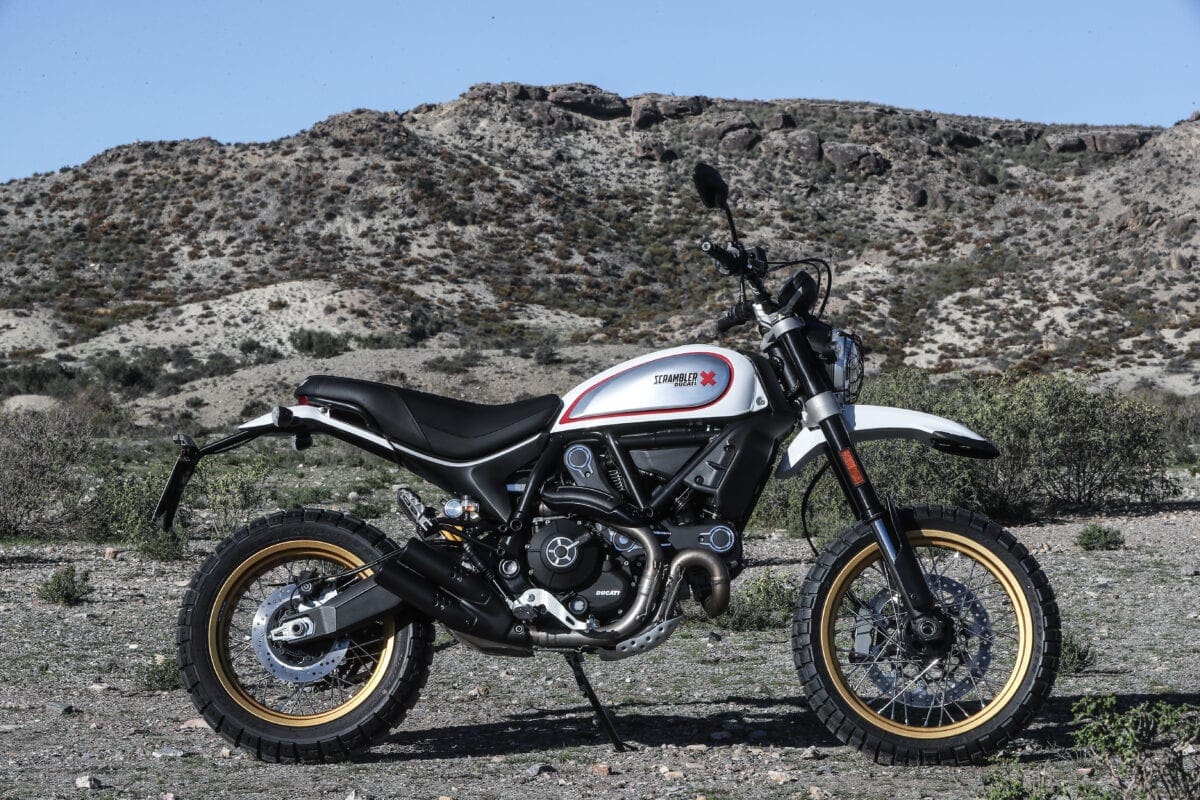 Which was handy given the technical environment and deep sand we soon tackled: miles and miles of deserted trails usually reserved for pukka enduro steeds and buggies, although the Sled felt perfectly at home. There are plenty of people who will question the absurdity of off-roading a perfectly decent £9,000 bike, yet this is one of very few road-based motorcycles I have ever ridden that inspires such confidence. Notwithstanding the 191kg dry weight (around 20kg heavier than other Scramblers), it’s a bike that backs up its looks with authentic pedigree, sifting through the sand with consummate ease. There’s an innate, almost supernatural balance, which belittles its bulk and works beautifully alongside the newfound lenient power delivery, and no doubt the de rigueur 19” front wheel and Pirelli Scorpion Rally tyres ably assist, too. Also worthy mentioning is the switchable ABS, which proved extremely handy during the desert forays.

Anyway, onto the road, where 99.9% of Desert Sleds will spend 100% of their time: there isn’t a better test of machine than the roads around Almeria, rich in every corner imaginable and readily available to to punish poor handling in a jiffy. Punching from corner to corner, it’s clear the off-road enhancements have made little sacrifice to its tarmac etiquette. Again hiding its weight supremely, it takes little encouragement to flick from side to side, with copious amounts of leverage supplied by the bigger ‘bars. Steering is somewhat lazier than previously, though there can’t be many other bikes that weigh 190kg yet ride like they weigh 130kg, partly owing to its suspension: this new KYB kit lends the Sled a beautifully controlled stroke at either end, specifically the front. Okay, there’s no hiding the soft set-up, but this only exudes a mass of mechanical grip and the ability to absorb anything thrown underneath.

Not only does it steer with surprising pace, it also steers with precision and neutrality, and I was never wanting more from the chassis throughout the day. But the Desert Sled isn’t a bike that belongs on the side of the tyre. As with any knobbly off-road tyre, there has to be certain compromises on the Tarmac, and there’s a dull hesitancy seeping through the ‘bars to warn you of the limit of adhesion. Ducati reckoned that tyre pressures were dropped by 5psi to assist in the desert sections, which could explain the big-lean shimmies, but even at committed speeds, none of us had issues with ground clearance.

In a world where electronics have engulfed modern motorcycling, there’s something deeply satisfying with riding undiluted bikes. No buttons to press, no modes to faff around with, and only a humble dash to study; it’s pleasing that Ducati hasn’t over-complicated the DS and furnished it with pointless gizmos. As mentioned, the only real change in the drive department is that progressive throttle. Maybe I’m too much of a hardnosed journo but there’s no doubt this Scrambler has lost some of its clout, most prominent when punching out of a turn. Previous Scramblers had a penchant for providing a rewarding instant hit, though that’s been culled for the Sled and you’re often left hankering for more from the motor at the bottom-end. Yes, it proved practical in the sand, but it’s unquestionably slower. 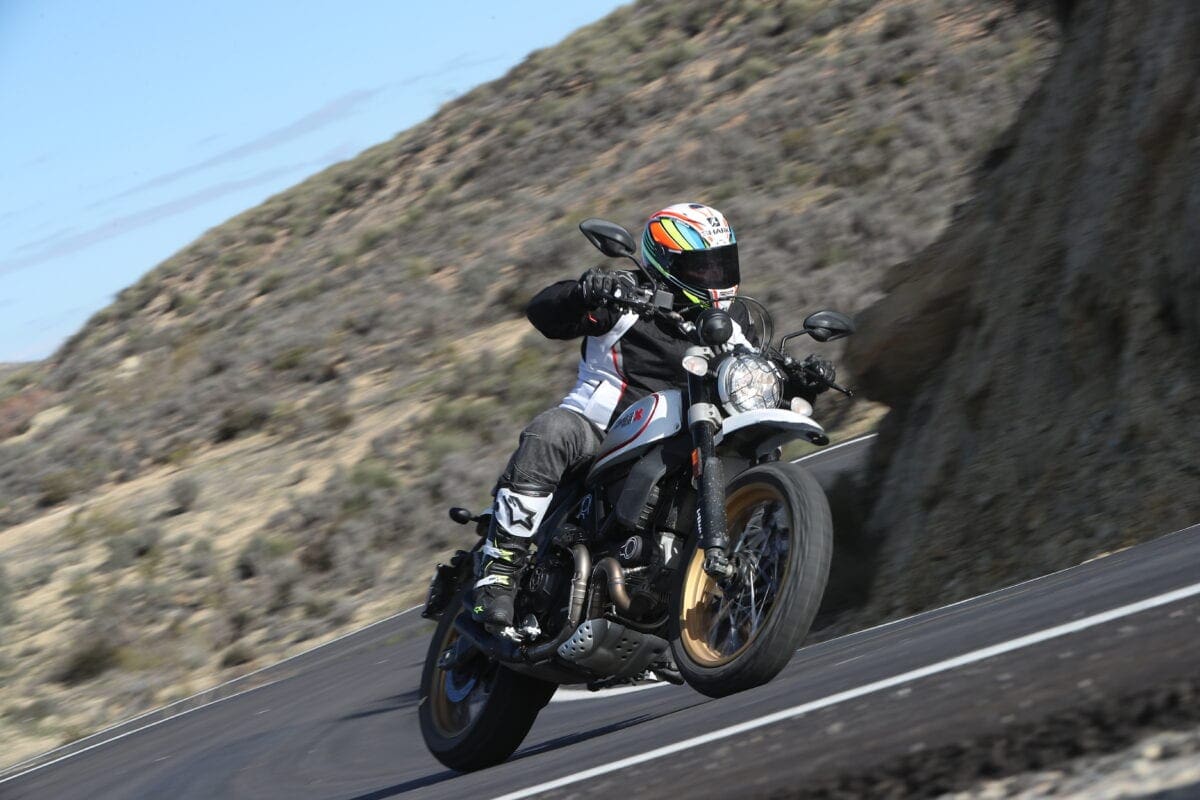 If you’ve yet to sample the Scrambler’s 803cc motor, it’s a very modern, free-revving, yet basic lump, bereft of vibes, idiosyncrasies and a doddle to manage. Making most sense above 4,000rpm and below 8,000rpm, its claimed 75bhp fuels superbly and is now content at pootling on and off the throttle. Will we see a smaller capacity version of the Desert Sled, like the Sixty2? No, not according to the Scrambler staff present on the launch, who understand that the DS is a big boys’ toy.

Available at the end of March, the Desert Sled will cost you £9,395 in red, although I don’t know why you’d want anything but the white, which is an extra £100. My only concern for UK clients is the lack of dusty fire roads and appropriate single tracks to fully exploit it potential. Make no mistake; the Desert Sled isn’t an enduro bike, not even a trail bike, but Ducati has accidently stumbled upon an inexpensive do-it-all adventure bike with colossal competence, even if long distance jaunts could become problematic with that puny 13.5L tank and poor wind protection. Maybe the desert-derived looks aren’t to everyone’s tastes but I’d highly recommend opting for this model over the rest of the Scrambler family. 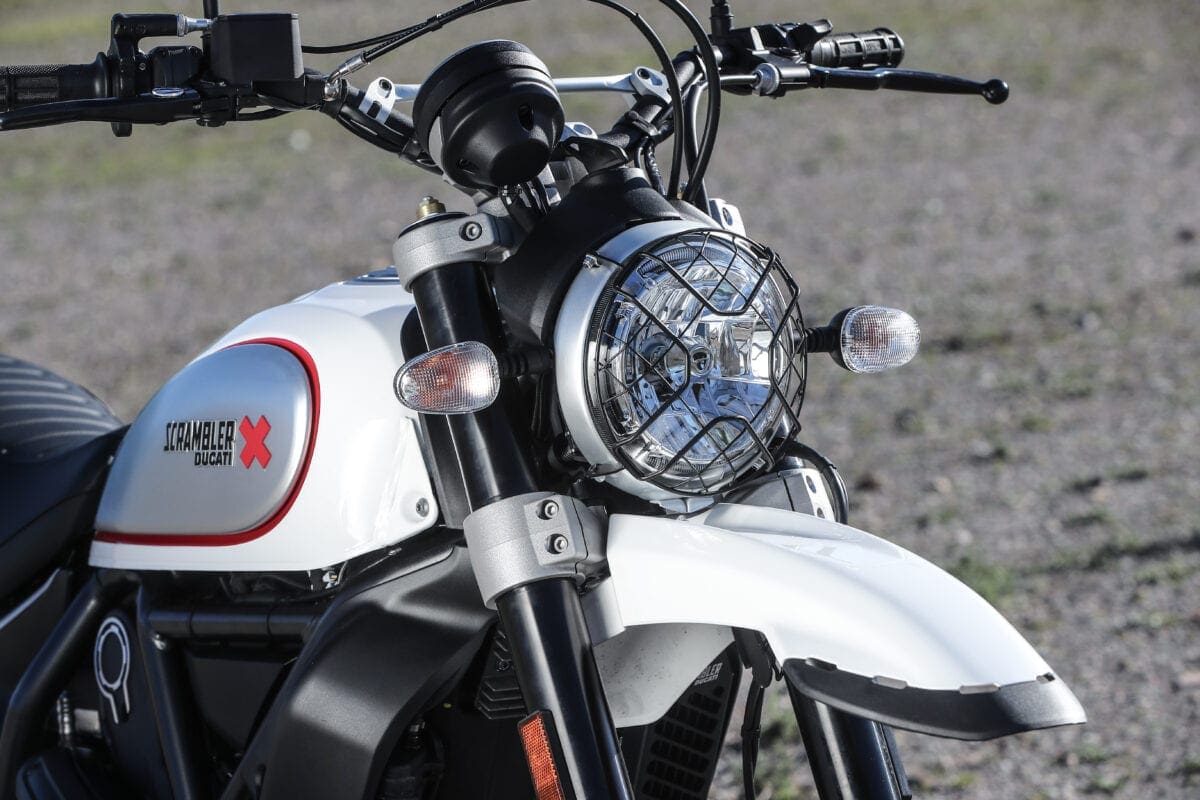 Like the majority of this modern retro sector, the Desert Sled is all about cosmetics. Purchase decisions are often swayed way before reading reviews, but Ducati’s latest creation has the minerals to offset the hype, plus an innovative elegance that’s yet to be experienced on a Scrambler. Put simply, it’s a bigger, better, more versatile sibling to the Scrambler faction, with supplementary riding parameters. 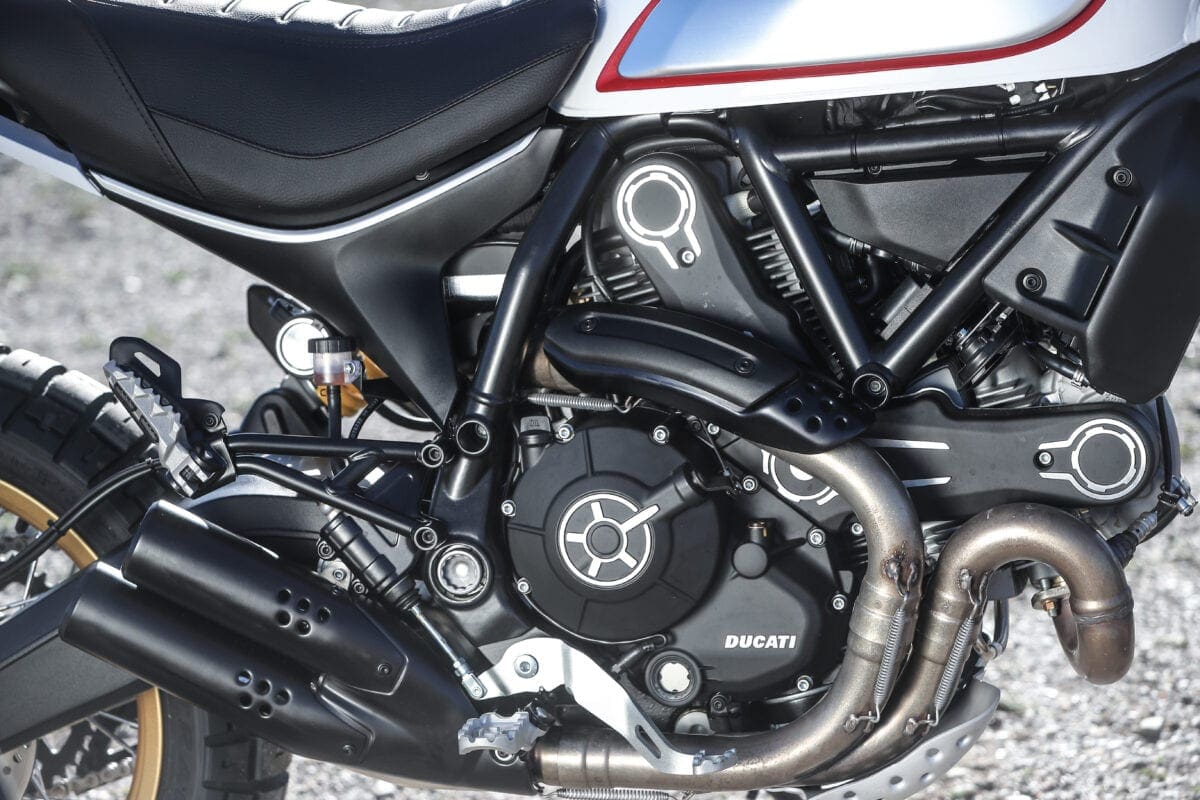 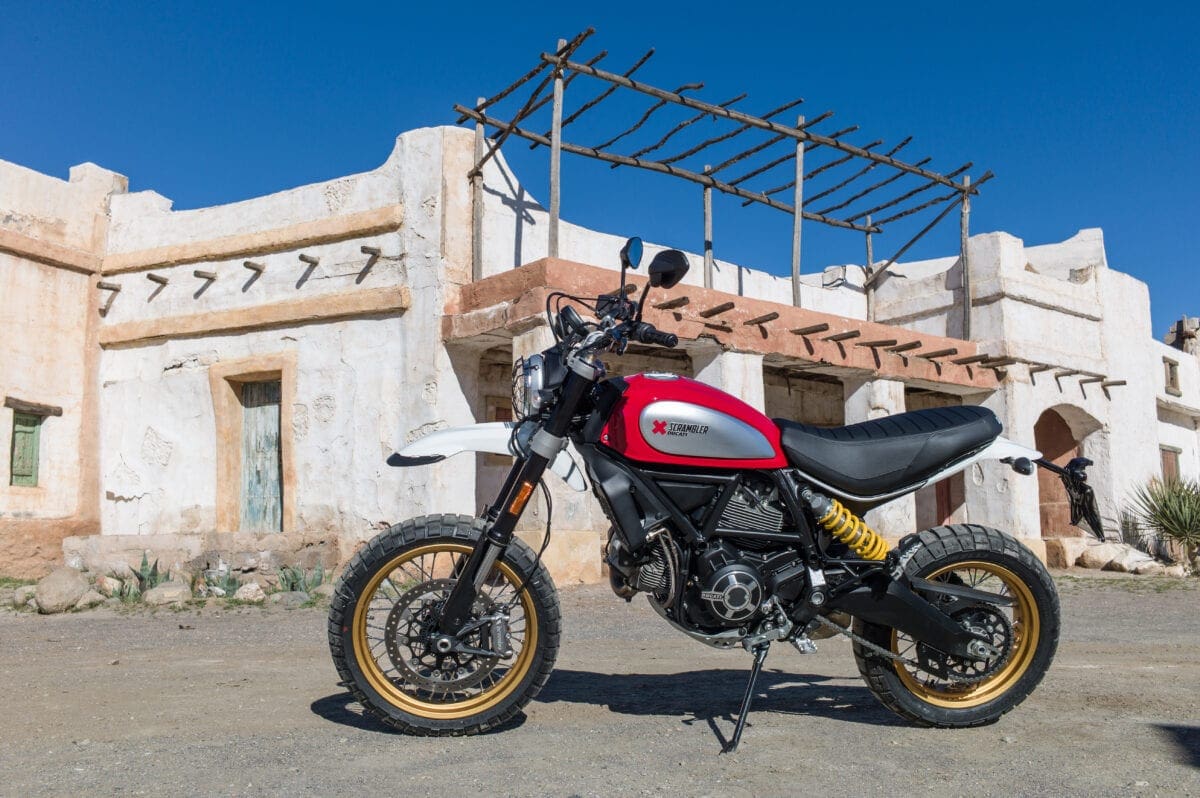 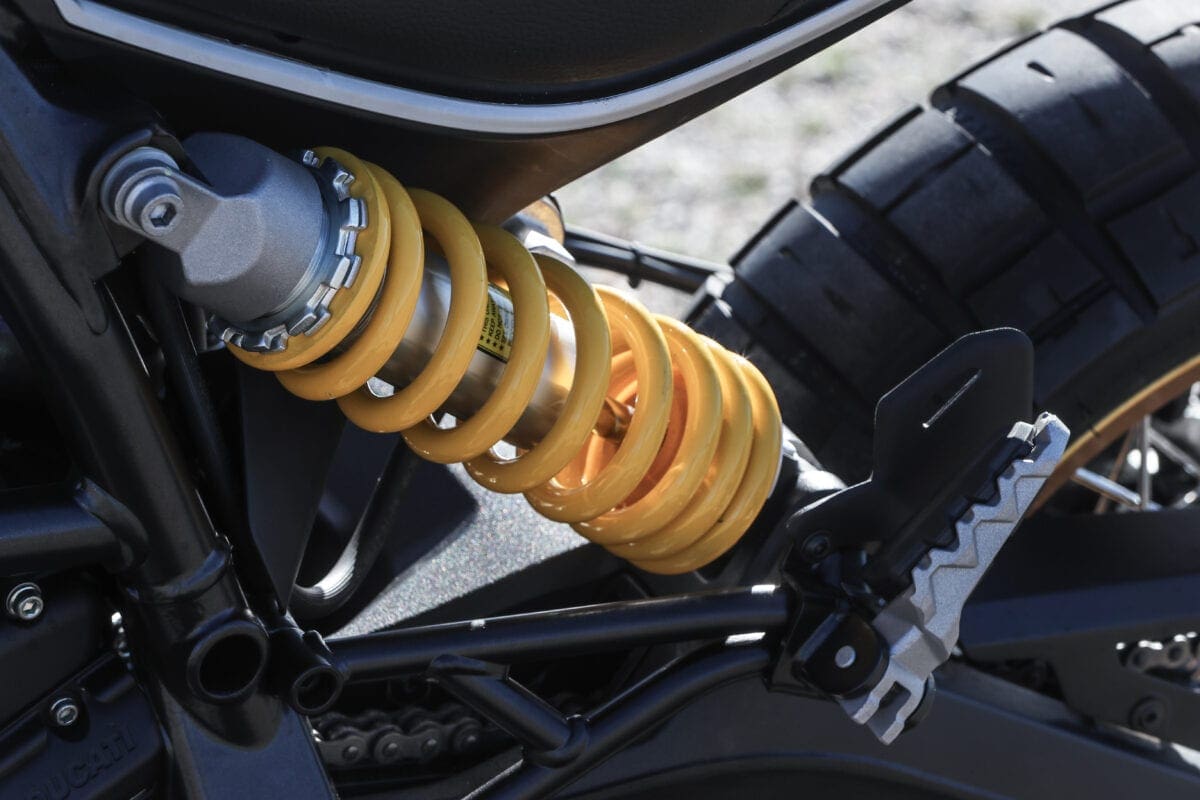