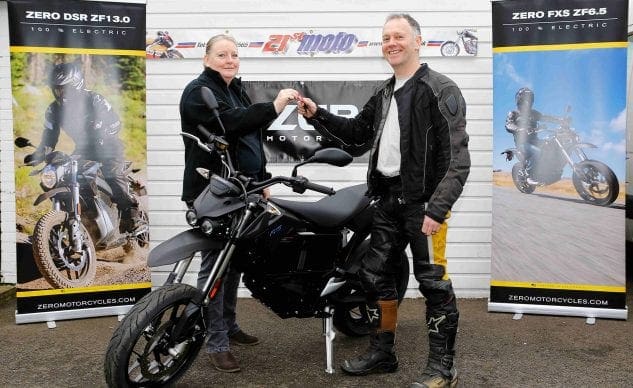 The first electric motorcycle to be bought with the new ‘plug in’ subsidy will be on the road from today (March 1st).

The dealer, 21st Moto in Swanley, Kent, confirmed that 48-year-old Fred Murphy from Redhill in Surrey is the first customer in the UK to benefit from the subsidy, introduced by the Government’s Office for Low Emission Vehicles (OLEV) to increase the uptake of electric vehicles.

Mr Murphy bought a Zero FXS, which has an average range of 60 miles, a top speed of 85mph and costs the equivalent of a penny a mile to power.  It can be charged using a household three pin plug, with faster charge options, which can reduce full charging time to two hours. 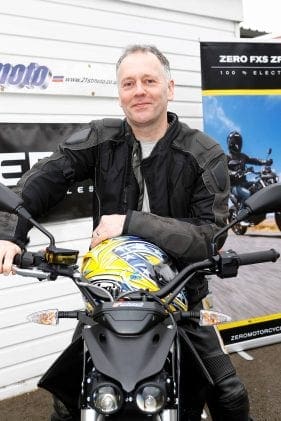 Up to now the ‘plug in’ subsidy has only been available for electric cars and vans, but it can now be applied to electric motorcycles and scooters, so long as they meet certain quality criteria.  This includes having a battery with five years’ warranty and a good range.

Rob Francis, Dealer Principal of 21st Moto, which has now sold a total of three zero motorcycles since the grant was introduced, says the system of claiming the subsidy is extremely easy for customers:

“The dealership does all the work, so there are no forms to fill out, or paperwork to complete.  The dealer makes the application direct to OLEV and the price is reduced by £1500 or 20% of the total purchase cost, whichever is the smaller number.”

Customer Fred Murphy, who has owned and ridden motorcycles for more than 25 years, has traded in a petrol bike for his electric one.  He said enjoyment and an interest in new technology was the motivation behind his purchase and that he will be commuting to work on it:

“As an ‘electronics geek’ and an early adopter, I have always been interested in electric bikes and tried my first zero back in 2012, so when the ‘plug in’ grant finally came in, this was enough to justify my jump to electric.”

Steve Kenward, CEO of the Motorcycle Industry Association, which lobbied for the subsidy, says motorcycles and scooters will help cut congestion: “Whether electric or not, a motorcycle, scooter or moped benefits from reduced journey times, easier or free parking, no congestion charge and is normally cheaper to run and insure.  There is also the added benefit that it’s just more fun than other modes of transport.”