If you fancy going to the brilliant (and huge) Stafford Showground for the show then just click HERE for all the information you’ll need.

The show, held across April 22 and 23, has the world-leading auction as part of the event and this year’s line-up of motorcycles and memorabilia includes the World Championship winning bike, incredible barn finds, crated 1990s superbikes and a plethora of bits and pieces, too.

Velocettes with a significant race history rarely come to market, let alone a World Championship, Isle of Man TT and Grand Prix-winning example. The 1948 Velocette 348cc KTT MkVIII Works Special racing motorcycle (£120,000 – 150,000) was raced by Freddie Frith in 1949 to win the 350cc class of the FIM World Championship in the competition’s debut year. As is often the case with racing machines, the works Velocettes were dismantled and sold on, but the engine and frame from the ex-Frith 350 were reunited and rebuilt using genuine works parts. 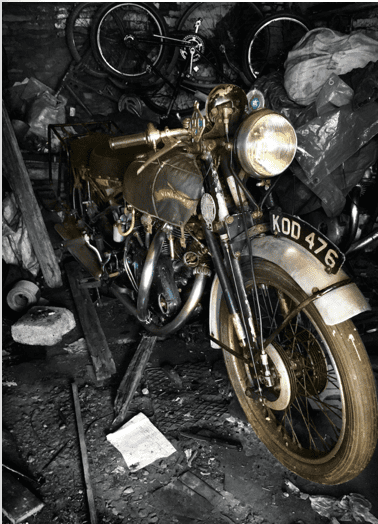 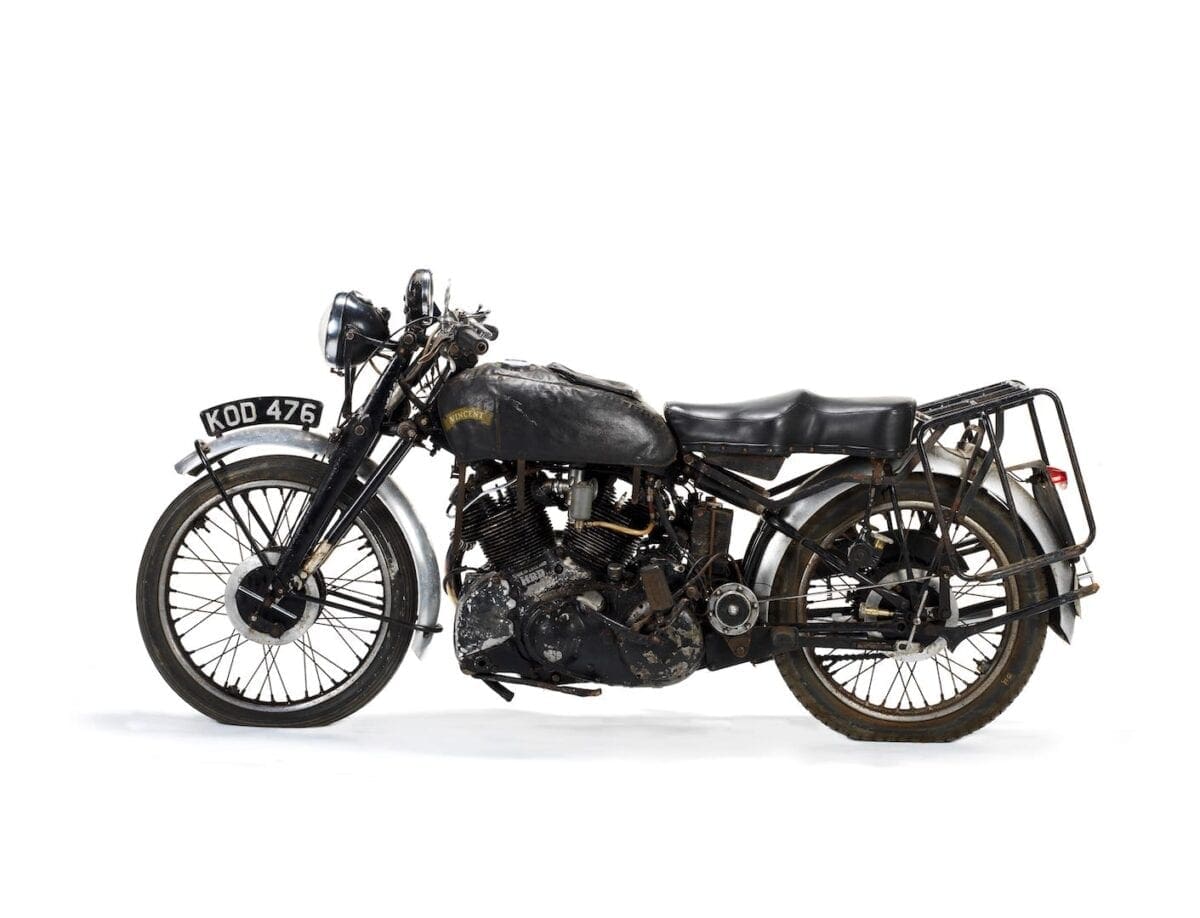 At a time when the average family saloon was barely capable of reaching 70mph, the Vincent Black Shadow was capable of tearing along at 120mph, faster than any production vehicle of the time. Not every Shadow-specification machine left the factory with the distinctive black-finished engine casings, the few that did not being known as ‘White Shadows. Last ridden in 1976, this machine (above) was put in to storage in a family shed and promptly forgotten. Upon its recent rediscovery by the family, it was mistaken for the slightly more common (although still highly desirable) Black Shadow.

However, closer inspection revealed that this was one of the rarest models and one of only 15 ever created – a 1949 Vincent 998cc White Shadow Series C Project (£50,000 – 60,000). ‘Barn find’ Vincents of any kind seldom come to light and when they do are highly sought after, and this White Shadow – one of the rarest of post-war Vincents – has to be one of the most desirable. 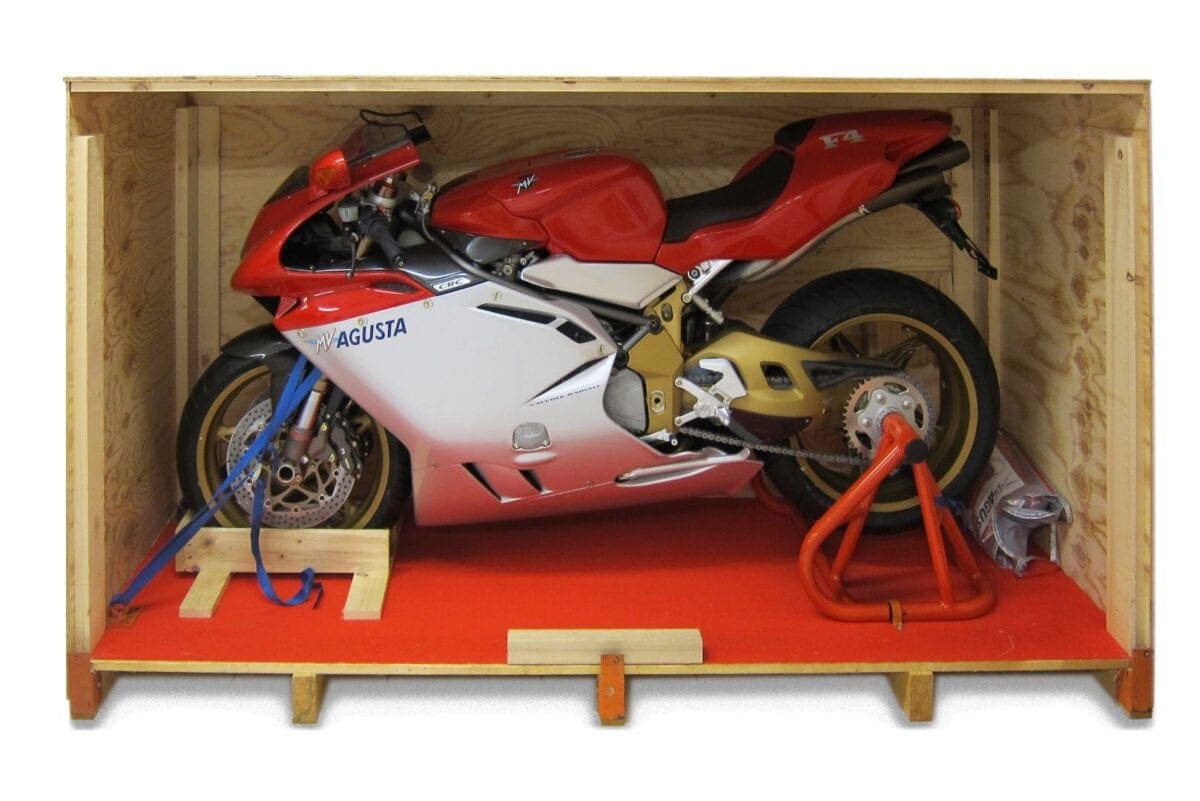 Designed by Ducati 916 creator Massimo Tamburini and introduced at the 1998 Milan Show, the F4 has become part of MV legend. In a publicity masterstroke, the factory announced that production would commence with a limited edition of 300 very special F4s: the ‘Serie Oro’ (Gold Series). The price was set at around double that of the standard F4 Strada, yet every single one had been sold prior to delivery, such was the demand. That stratospheric price tag was explained by the exotic materials employed in further reducing weight.

Few names in the automotive world are as evocative as that of John Surtees. He remains to this day, the only person to become World Champion on both two and four wheels. Believed to be one of two machines constructed around the ex-Works Ducati 250 DOHC engines incorporating a special Reynolds frame, this c.1960 Ducati 250GP Racing Motorcycle (£80,000 – 100,000) can count Mike Hailwood and John Surtees amongst its former owners. Hailwood is known as the comeback king of the motorcycle racing world. After a seven-year hiatus from top-level racing, he took on and beat the Honda works team to win the Formula 1 TT at a record speed.

Prior to Mike’s comeback in the 1978 TT, he participated in a few warm-up races in Australia having emigrated to New Zealand with his family in 1976. His 1978 Bathurst Grand Prix leathers are included in the sale (£3,000 – 4,000). Local star Jim Scaysbrook organised a Yamaha TZ750 for Mike to ride, courtesy of the Milledge Brothers, the Yamaha distributors in Victoria, with sponsorship from Walker Radial (‘Team Avon Tyres’). It was Walker Radial that commissioned Mike’s leathers to be made by Harold Johnson in Sydney, hence the ‘Leathers by Johno’ patch on them. In the wet race, Mike finished a respectable 9th. Following his successful return to the Isle of Man, Mike raced for the vendor again in 1979, wearing the same leathers, at the Adelaide three-hour race on Jim’s Scaysbrook’s Honda CB900.

Alongside the Hailwood leathers, the auction also includes a set of Graeme ‘Croz’ Crosby leathers (£1,000 – 1,500) emblazoned with the Apple Computer logo (the vendor was the biggest retailer of Apple in Australia at the time) and believed to be the only occasion Apple had sponsored a motorcycle team. 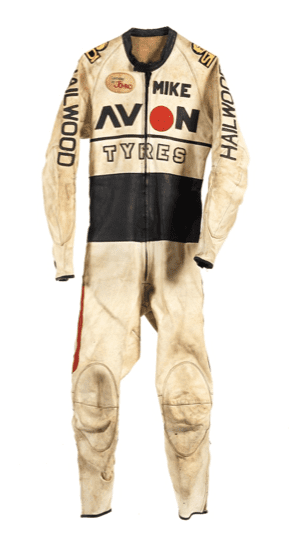