A few weeks ago we brought you the first picture of a futuristic Honda that Scarlett Johansson’s character The Major rides in the upcoming sci-fi blockbuster film Ghost in the Shell – and today it’s been announced that it was a custom Vultus NM4. 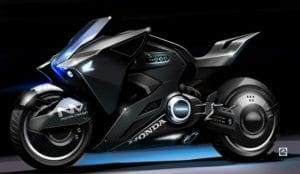 Based on the internationally acclaimed Japanese manga, “Ghost in the Shell” is set in the near future and stars Scarlett Johansson as Major, a human saved from a terrible crash, who is cyber-enhanced to be a perfect soldier devoted to stopping the world’s most dangerous criminals.

Honda provided the NM4 Vultus as the base model for the futuristic bike in the film, though inevitably, the film production team made a few tweaks to the original design sketches provided by Honda. It’s an awesome looking thing, and it certainly vehicle helps to make the futuristic world depicted in the film more realistic.

Here’s the trailer for the film and in this, for a couple of seconds, you get to see the bike in action…

Ghost in the Shell will be released in UK cinemas on March 31st. For more details, click HERE.