With a relatively successful racing career behind him, including a Canadian National Championship and an Isle of Man TT podium, former racer Andreas Georgeades decided to hang up his leathers and pursue his passion of squeezing powerful car engines into custom built motorcycles.

His first attempt involved stuffing a 200bhp Ferrari V6 into a Honda CBX. During the build, Andreas (as you’d expect) faced quite a few challenges – including converting the Ferrari chain driven cams to belt, and modifying the motor to accept a clutch and transmission from a Suzuki donor bike.

He went on to bolt the motor to a hand-built aluminium frame, using suspension from a Kawasaki 900 Ninja, a rear wheel from a Yamaha V-Max – and ditched the drive shaft for a conventional chain drive. Further modification included a new cam-belt drive that also powered the water pump, a three-gear transfer case between the engine and Honda CBX transmission, a bank of Yamaha V-Max carburettors fuelling the front cylinders and another bank of Suzuki GS1100 carbs feeding the rear. 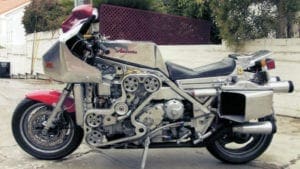 Andreas then created a third custom bike using a Ferrari Dino V6 motor (the same that powered his first) – but taking things even further he added a self-made supercharger to take performance to the next level. He designed and manufactured it himself, using huge chunks of billet aluminium – and called it the ‘Andreas’. 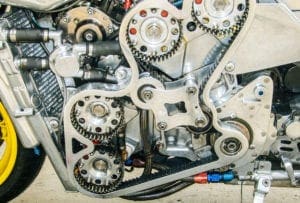 Not content with the three separate Ferrari powered motorcycles in his collection, Georgeodes picked up his tools again, this time creating a V12 Honda CBX (powered by two six-cylinder CBX engines welded together). 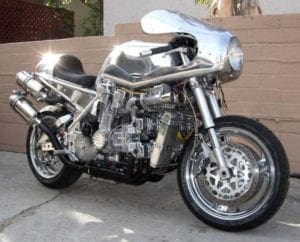 He’s now working on a H16 powered bike, using four Yamaha YZF600 599 cc engines to create one monstrous 2396 cc engine. If you’d like to keep up with his build process, and learn more about the man behind the bikes, checkout his Facebook group, V12 CBX. 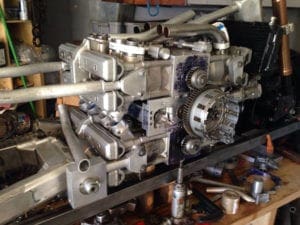