Behind the scenes of ‘Ghost in the Shell’ with the Honda NM4 design team!

We’ve already told you (multiple times) how excited we are for the the live-action version of Ghost in the Shell – and in time for today’s release Honda Japan has posted a fascinating blog piece from one of the designers involved, who breaks down the production process which began back in the summer of 2015.

It’s pretty easy to see why the NM4 was chosen as the base vehicle – it’s already a futuristic looking machine, and its unique concept and styling fitted in with previous (manga and animated) versions of ‘Ghost in the Shell’.  Honda said, ‘The NM4’s futuristic design really matches the image of the work.’

A handful of Honda engineers were then brought on-board as part of the film’s production team, to help turn the futuristic Honda NM4 into a machine befitting of the ‘film’s worldview’. According to Honda, they were asked to develop the bike without specific information from the production team – so it was really left to the imagination of the engineers, who as fans of the ‘Ghost in the Shell’ series, got a little bit carried away. 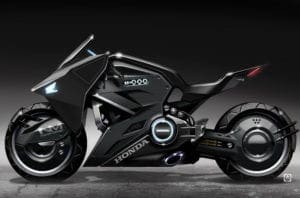 Nevertheless, the director and production team were pretty happy with what Honda presented, and had only a handful of requests to bring the NM4 in line with the films ‘worldview’.  The first was to change the upright sitting position into a forward-leaning position, and the second was to make the machine actually run – which Honda were more than happy to sort.

‘I want to make it appear as a real motorcycle to the last.  I wonder if it can be said that it really is a sign of Honda’s commitment.  Even in fictional movies, real thought is put into the manufacturing process.’ 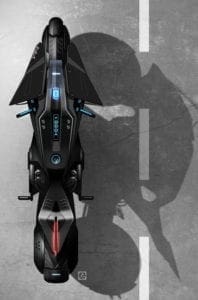 While the bike used in the film looks dramatically different from the production model of the Honda NM4 – it is, in reality, much the same.  The handlebars, seat and footpeg positions have been adjusted, but the general mechanics and dimensions of the bike, including the caster angle, wheel base and tyre size remain standard (mainly because it had to run). However, a range of small design features, including hidden luminescent Honda and Wing logos, a tank side connection plug and a Tachikoma-style camera on the tail cowl help make the ‘Ghost in the Shell’ NM4 Vultus stand apart from the production model.

‘If people watch ‘Ghost in the Shell’ and their interest in motorcycles increases even a little, it will be a great pleasure for the team involved in the project.’

Ghost in the Shell is released in UK cinemas today – to watch the trailer, and get a glimpse of the NM4 in action, click HERE. 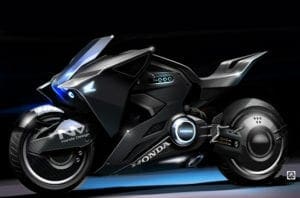