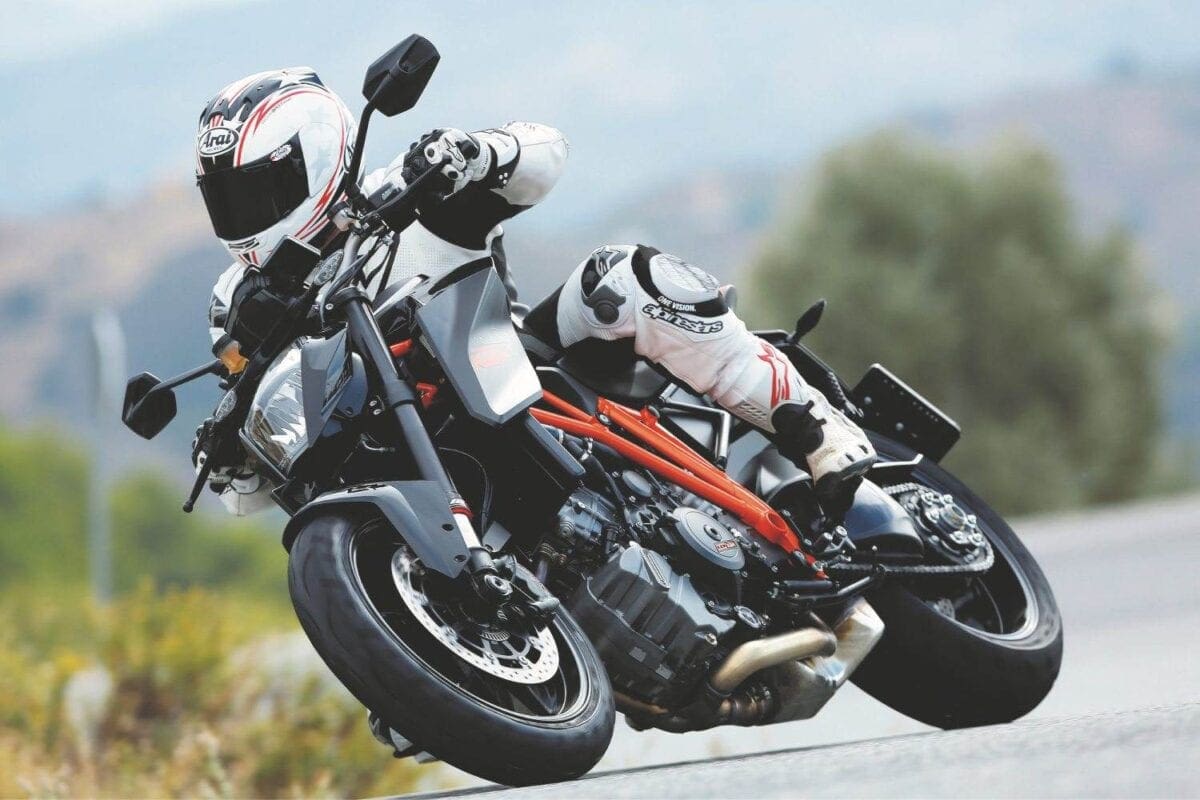 On paper, KTM’s new Super Duke R is a terrifying prospect: a two cylinder engine with more capacity in one pot than all four in an R6; the styling of a supermoto on steroids; 180bhp… hell, KTM even call it ‘The Beast’!

This is an all-new motor for the Super Duke family, taking over from the 990. The previous engine was all about the power, with a sharp throttle response making it great fun (if you’re into what some might call a hooligan bike). The thing is, the 990 ‘only’ made 123bhp. The 1290 looks like it’s going to live up to its intimidating nickname… 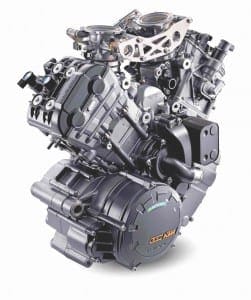 The huge power and torque of the KTM is actually surprisingly well mannered. Obviously, it needs treating with respect – this twin doesn’t have the peakiness of a high-revving four-cylinder superbike – the power is delivered instantly, but importantly for a road-bike, it’s delivered smoothly.

KTM’s previous twins sometimes suffered from a bit of a snatchy output, but the fly-by-wire system used in the Super Duke R is positively gentlemanly. Three switchable modes allow the rider to choose from ‘rain’ (capped at 100bhp), ‘street’ (full power, calmly delivered), and ‘sport’ (the full-fat, high caffeine, you’d-better-be-aware-sunshine mode). As early as 2500rpm, this lump is capable of producing 74lb-ft (150% of the peak torque an R6 makes), with the 32lb-ft remaining coming in over the next 4000 revs.

There are a lot of clever electronics taming The Beast, courtesy of Bosch and Keihin, but they’re really not noticeable. Traction control is a big help, and will also limit wheelies (though it can be turned off if that upsets you!). Despite all this performance though, the KTM has a 15,000km (9300mile) service interval.

In a world of lightweight, complex alloy frames, the Duke stands out with its Chromium-Molybdenum-Steel, powder coated trellis frame. 48mm WP upside-down forks and a WP monoshock aren’t revolutionary, but they’re competent and balanced. The rear shock copes with huge dollops of power in a terrifically calm way, mated to the single-sided swingarm which isn’t just for aesthetic benefits – it means the large single exhaust can be routed in a more acute way to keep the angle of lean high. The forks are split, so compression and rebound damping are taken care of by individual legs, which is claimed to give greater damping control and accuracy. Adjustments to the settings are easy thanks to plastic knobs – no need for a screwdriver here. 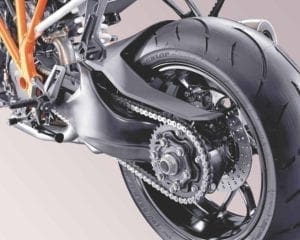 A single sided swingarm allows the exhaust to tuck up and out of the way for greater lean angles.

The ride is firm, but it’s very stable – large unfaired bikes can sometimes get a little flappy under hard acceleration, but the KTM keeps it all under control.

The digital dash will look very familiar if you’ve ridden the KTM 1190 Adventure. A small screen to the left, and controls on the left handlebar let you access the three riding modes, as well as access the ABS and the Traction Control settings. There’s a sub-routine called Supermoto which allows the ABS to work on the front wheel but cuts it to the back wheel, just in case you happen to have aspirations of sliding the back-end into corners!

The 1290 is very narrow to sit on – look at the bike from the rear and the whole thing doesn’t appear much bigger than the 190 section Dunlop Sportsmart2 rubber. The usual slim seat means that even shorties like me (5’ 8” on a good day) can easily touch the floor when stationary, and overall the centre of gravity of the bike means that paddling it around, or making u-turn after u-turn with your feet up is a doddle.

The 1290 is as nimble as any naked motorcycle currently on the market and it’s surprising how easy it is to throw around – you do have to keep telling yourself it’s a 1300 just because, apart from when you crack the throttle open, it doesn’t feel like a bike of that size at all. KTM seem eager to push the idea of this being a bad-boy’s bike, and in a market that’s rapidly distancing itself from mind-blowing speeds and race-rep bikes, it’s possibly a good plan to dominate a niche. What’s really striking about this bike however is not the awesome power: you don’t get off it feeling like you’ve just been at warp speed. The real shock is just how controllable, how usable and, dare we say it, almost practical this bike can be. 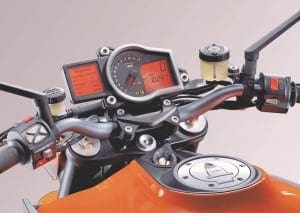 The three riding modes, and ABS & traction control can be set with the buttons on the left bar.

At the time of writing, KTM wouldn’t commit to a firm cost for the bike, saying that the price of around £13,000 will be confirmed at Motorcycle Live. That’s a lot of money, but this is a highly advanced machine (we wouldn’t be surprised if it’s closer to £12,500 when they do tell us).

If you hanker after the days of re-jetting and balancing carbs, servicing your own bike, and tinkering with the coils then this probably isn’t the machine for you. However, accept that stringent emission laws, and the quest for ever-higher power outputs mean that most mechanics now need a computer by their side, and you might want to consider the Super Duke R. It’s never going to be an all-out tourer, but in the same way that many riders loved to own the Hayabusa as the world’s fastest production bike, buying the new KTM could have a similar kudos. 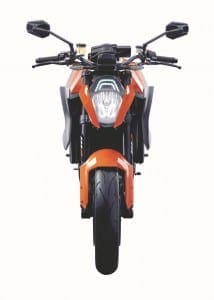 On the road, the KTM is a bit of a con (in the best possible way). It looks like it lives on raw meat, and there’s no denying the presence that the 1290 has. Riding it, you’re reminded of KTM’s heritage instantly: you’re pitched slightly forward and there’s a wide-grip handlebar up front; the footrests are tucked up high and back, and it all feels oh-so-purposeful. But you can do a lot of miles – we did close to 200 on the launch ride, and all of that was going from corner to corner, with no aches or pains at the end of it. Tick the box for riding position then.

Before we took the bikes out, the route was described by KTM development rider and former GP racer Jeremy McWilliams as “A full day of riding – some great roads at the start then we ride over some very bumpy, narrow, rough roads before we get to the really slippery roads…” You could almost hear the world’s press’ bum cheeks clenching at the thought of taking The Beast out in these conditions, on roads with 1000ft drops behind the small barriers, yet there was no drama, just big grins. Yes, we had the traction control turned on, and the ABS pumping away when braking ambitions outweighed grip, but so what? This bike makes you feel great!

So, it’s without any fear of contradiction that I can tell you that this bike is really not a beast. It might have the heart of a wild (and rather angry) lion, but it’s kept in check by one of the most advanced electronic brains in today’s bikes. Just don’t let it hear you call it a big softee… 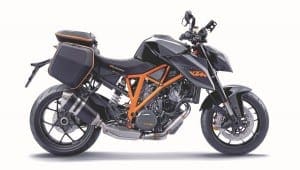 A small luggage system, available from KTM, is a nod towards the practical side of the bike. 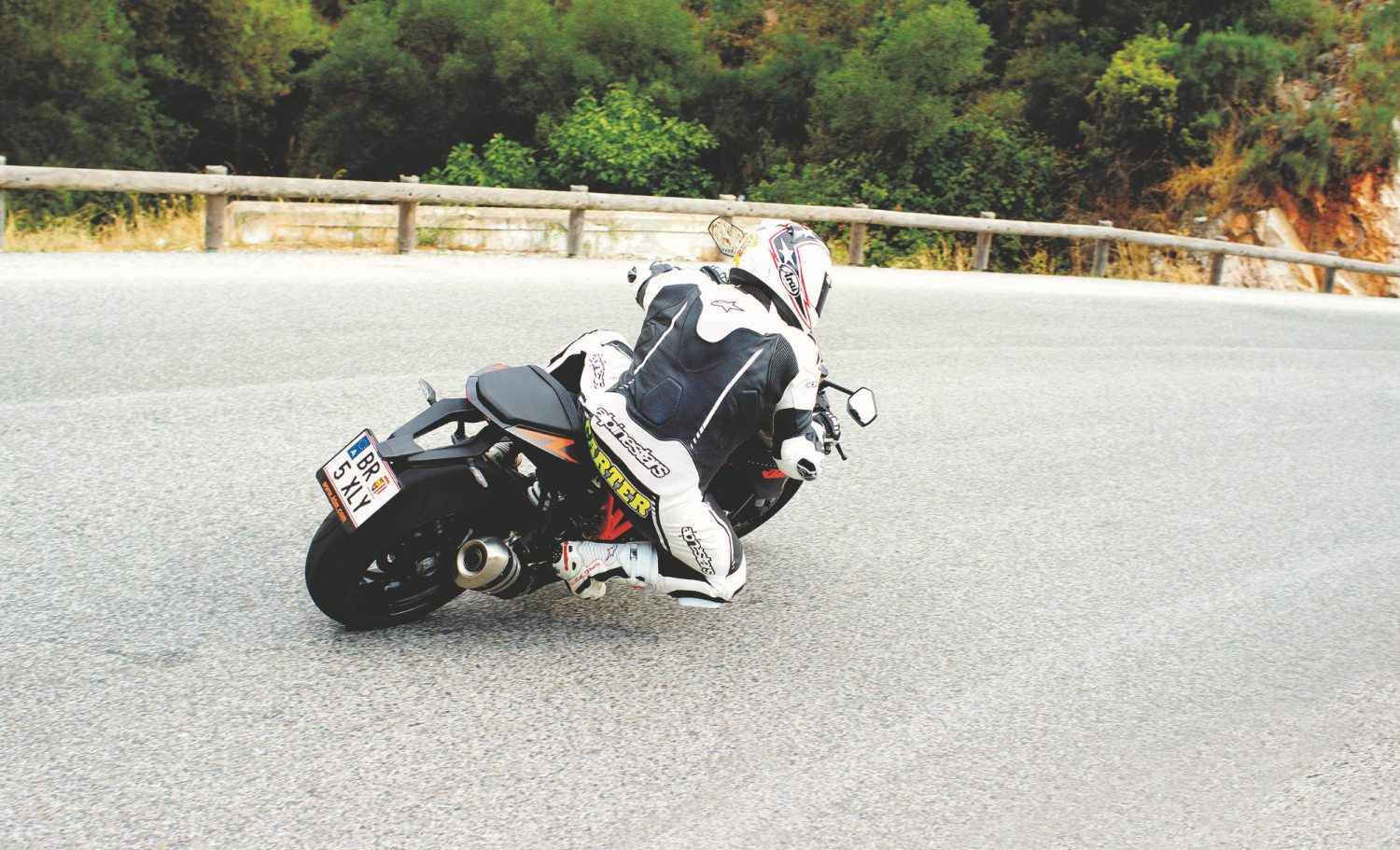