A letter that Lawrence of Arabia wrote to George Brough, placing an order for the SS100 Brough Superior motorbike on which he died, is going under the hammer at the end of the month. 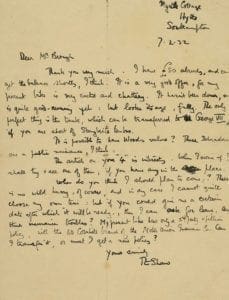 For the uninitiated, Lawrence was a British intelligence officer in Cairo at the time of the Arab Revolt against German-supporting Turkey in June 1916. He is famed for having led the revolt to victory and re-writing the map of the Middle East – as well as his love of Brough motorcycles. 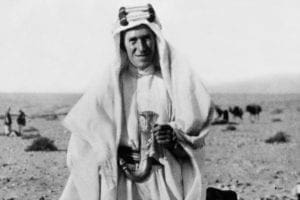 The letter, dated February 7, 1932, discusses payment and collection of a brand new Brough Superior SS100. In the letter, Lawrence wrote: “Dear Mr Brough…I have £80 already, and can get the balance shortly, I think. When do you think I should plan to come? There is no wild hurry, of course, and in any case I cannot quite choose my own time: but if you could give me a certain date after which it will be ready, then I can ask for leave.”

Sadly, the 1932 SS100 bike – which Lawrence would nickname George VII – was to be the seventh and final Brough he owned.  Three years after collecting the bike, he was killed while riding near his home at Clouds Hill, near Wareham in Dorset. He had swerved to avoid two boys on bicycles, lost control and was thrown over the handlebars. 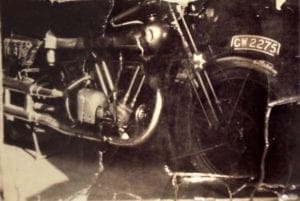 Before his death Lawrence described the bike, which could travel at over 100mph, as ‘a skittish motorcycle with a touch of blood in it’ – while his eighth Brough, George VIII, was already on order.

The signed letter was acquired many years ago by a book collector – but it has now been put up for sale for an estimated £6,000.

Richard Austin, of auctioneers Sotheby’s , said: “This fateful TE Lawrence letter is so evocative bearing in mind we know he died while riding the bike he was writing about.  The appeal here is not so much the content of the letter but the context. TE Lawrence was a great motorcyclist who was synonymous with Brough bikes. He obviously had a relationship with George Brough so while it’s not necessarily unusual to find a correspondence between the two to have this particular one is very special.”

The 8ins by 6ins framed document is being sold by Sotherbys in New York on April 24. For more information, click HERE.