Rickey Gadson has set a new world speed record on a modified Kawasaki H2, reaching 229.1 mph at the Texas Mile. 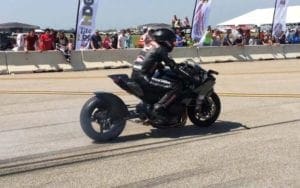 The name Rickey Gadson might seem familiar to some of you. He’s an 11-time ¼ mile champion drag racer, RG62 performance parts manufacturer, star of US tv show ‘Caffeine and Octane’, and he’s recently clocked the highest speed ever on a supercharged Kawasaki Ninja H2.

The 2015 release of the Kawasaki Ninja H2 – the world’s most powerful production motorcycle – inspired Rickey to move away from ¼ mile racing and take on a new challenge; seeing what speeds he can reach in a mile.

Gadson pretty much immediately began working on developing performance parts for the H2. An interested customer named John Paul Faircloth wrote to Rickey on social media in 2016, saying “I only want you to build my bike and don’t care how long it takes either as long as you build me the baddest H2 in the country” – and so he did.

Modifying the stock Kawasaki H2, Gadson used his own brand of RG62 performance parts, including RG62 Performance Plus Supercharger kit; cylinder head porting; custom camshafts; Woolich Racing box; and Michelin EVO tires. The most interesting difference is the new gearing for the H2’s supercharger that significantly increased boost over stock – taking the H2 from restricted 187 horsepower at the rear wheel up to an incredible 323hp, a 136hp increase over stock.

Late last month he rode the modified H2 at the infamous Texas Mile event in a bid for a new world record on a Ninja H2.

“When I received the go-ahead from the starter, I slowly rolled the throttle through first, second and third gear, finally locking the throttle by fourth gear with the Michelin EVO tire hooking up in 4th. It wasn’t until the top of 6th gear that I realized that I was turning 200 more rpm going through the traps from previous passes and I knew it was going to be a good run.” 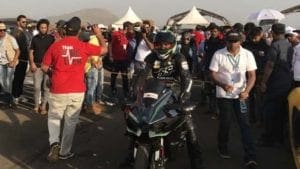 And it was a good run, as Rickey produced the fastest trap speed ever in a standing mile for a Kawasaki H2/H2R.

“When I pulled up to the ticket booth the man looked at me and shook his head and gave me three copies of record-breaking tickets that read 205 mph at the half-mile mark and, unbelievably, 229.1 mph at the mile!” 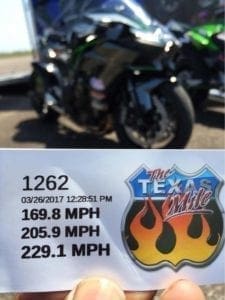