At the grand old age of 38 years old (and 66 days), Valentino Rossi is still breaking records. The 15 year veteran of the MotoGP grid has just achieved another huge milestone, by becoming the second oldest rider in history to lead the MotoGP World Championship, after his podium in Austin this weekend. 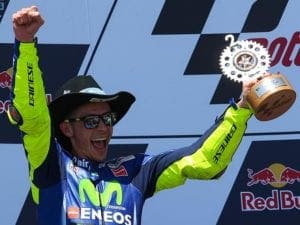 Valentino is currently the oldest rider to the top of the overall provisional standings since 1949, having moved above British racer Leslie Graham, who on September 4, 1949, achieved the same feat at the age of 37 years and 340 days on a factory AJS Porcupine 500cc machine.

Ahead of Rossi sits British racer Harold Daniell, who rode a 500cc Norton to victory at the first two races of the Grand Prix World Championship in 1949 (the Isle of Man and Berne, Switzerland) at the grand old age of 39 years and 256 days. And, with a raft of younger riders hot on his heels, Valentino is going to need to keep up the pace for a few more seasons if he wants to knock Daniell off the top spot. 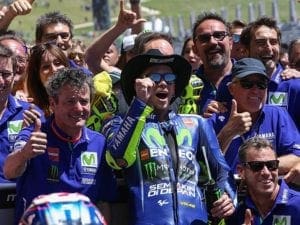 Both Leslie Graham and Harlold Daniell are also cemented in history as two of the oldest drivers to have won Grand Prix Championship races, at the age of 41 years and 21 days and 39 years and 240 days respectively –but it’s multiple GP World Champion Fergus Anderson who sits atop that list after winning the Barcelona GP in 1953 on a 500cc Moto Guzzi at the age of 44 years and 237 days.