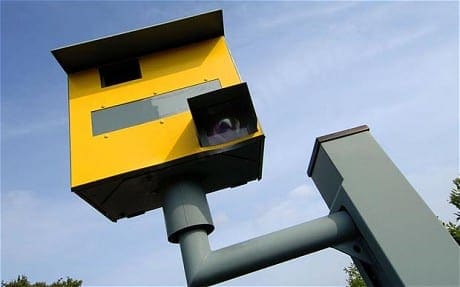 The UK insurance broker submitted freedom of information requests to the UK’s largest county police constabularies. The results reveal which speed cameras have caught the most instances of motorists breaking the speed limit over one year and highlight the dangerous areas of the UK’s roads where motorists are advised to take extra care.

Located just south of Grantham in Lincolnshire, motorists driving northbound along this stretch of the A1 racked up the most fines in the UK, according to the new data. The camera charged an average of £1,661 a day in just one year, making it one of the most lucrative cameras in the country.

Bikers and drivers travelling along the M180 close to Scunthorpe are also prone to speeding, with a camera on this stretch of road, west of the River Trent, racking up 5,853 speeding offences in a year, totaling £583,500.

Unsurprisingly, Britain’s busiest motorway had two locations that featured in Britain’s five highest earning speed cameras. A camera between junctions 17 and 18 of the M25, close to Rickmansworth, was responsible for 5,385 speeding tickets in one year, with motorists traveling an average of 62mph in the 50mph zone. A camera between junction 5 and Clacket Lane Services on the London Orbital issued 3,723 fines to motorists who were averaging 61 mph on this 50 mph stretch of road.

Rebecca Donohue, Head of Marketing at Carole Nash, said: “With some speed cameras issuing tickets that amount to well into the hundreds of thousands it’s understandable that, at times, motorists feel like they are being taxed again. “It’s really important to remember that such cameras are put in place to reduce accidents and save the lives of motorists and bikers, something which is far more important than any amount of money.

“We wanted to find out which roads are prone to speeding motorists to help raise awareness of the dangers in those areas and encourage bikers and drivers alike to take extra care on these roads.” Carole Nash also spoke to Sergeant Mark D Lucas of the London Metropolitan Police to find out more about the dangers of speeding and the importance of speed cameras you can see that you can see more at Carole Nash Motorbike Insurance Brokers.