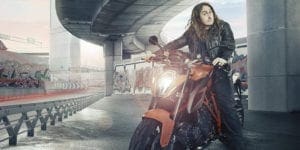 ‘Ross Noble: All Torque’ is set to be shown on Dave, and will follow motorcycle fanatic Ross Noble as he takes part in the Scottish Six Days Trial. The three, hour-long episodes will observe Noble as he takes part in the “legendary challenge where the best motorbike riders in the world come together to race a hundred miles each day in a true test of stamina, ability and willpower.”

Channel Dave said “It’s a race that’s defeated countless seasoned professionals who’ve been riding all their life, and certainly isn’t for the faint-hearted – or foolhardy comedians. Training during every second of spare time and helped along the way by his coach James Burroughs, can Noble conquer one of the toughest sporting challenges known to man?”

Speaking about the challenge, Noble said: “This is one of the most technically difficult motorcycle challenges in the world – you have to ride for eight hours a day for six days on a bike with no seat. But as I do stand-up as a job I’m hoping that will help!” 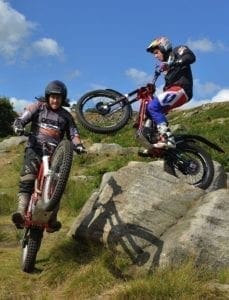 This will be Noble’s second show for Dave involving a motorbike. He previously presented Ross Noble Freewheeling, an improvised comedy series in which he travelled around the country on a motorbike. UKTV Commissioner Iain Coyle says: “We’re absolutely delighted to work with Ross again. He’s a fantastic bloke, a unique talent and, it turns out, pretty hardcore on two wheels.”

The SSDT took place last week, and wrapped up on Sunday May 7, 2017 – so filming for the series is pretty much in the can. Dave hasn’t announced the broadcast dates for Ross Noble: All Torque – but we do know it’ll be shown later in 2017.