Pitched directly against the current crop of retro-styled machines (I’m thinking Harley Davidson Street and Triumph Bonneville), Royal Enfield are getting ready to unveil their new Continental GT 750 to the world. 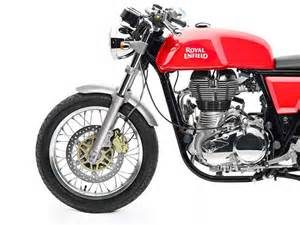 Over the last 6 months, the bike has been caught out testing in both India and Spain. The first test bike was spotted in Spain and was confirmed to have ABS, and the same engine setup as the newly released Royal Enfield Himalayan.

At first glance, the Royal Enfield Continental GT 750 doesn’t look much different to the current smaller capacity 500cc Continental GT. Its circular headlamp, boxy indicators, retro-styled spoken wheels and rectangular tail section are all pretty much the same as on the outgoing Continental GT. We have spotted a few notable changes though, with the clip-on handlebars being replaced by adjustable clubman handlebars. 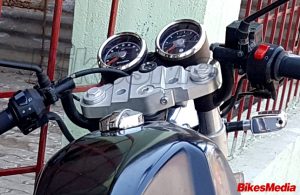 In the latest set of snaps to emerge from our friends at BikesMedia, we can see an extra exhaust coming out from the engine through another cylinder (which confirms that it is a twin cylinder with fuel injection). The engine set up looks pretty similar to the one on the classic Royal Enfield bikes, rather than the more recent Himalayan. However, like the Himalayan, the motorcycle looks to feature a dual channel ABS unit. Additionally, the tyres are Pirelli, and the brakes are Bybre (the Indian equivalent of Brembo). The model on show is looking pretty bruised – which surely means the testing has been pretty thorough. 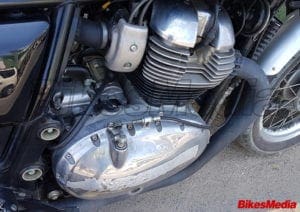 In contrast, the instrument panel looks bang up to date, featuring both digital and analog readouts – and we assume that the bike will be equipped with AHO (automatic headlights) as there’s no switch for turning on the lights.

Admittedly, most of these statements are only based on what we’ve seen. Sadly, Royal Enfield hasn’t revealed any official specifications, and the bike may well change by the time it makes it into production.