These exclusive shots of Husqvarna’s upcoming 701, the bigger version of the sweet 401 modern-twist cafe racer were taken in Spain a couple of days ago and give us everything we need to know about the bike that will be going on sale later this year.

Husqvarna is owned by KTM and unsurprisingly there’s much crossover between the brands for this almost ready-to-go-prototype. In the images a quick glance shows that the bike bears a strong resemblance to the 401 concepts shown last year, but up close you get a lot more detail. 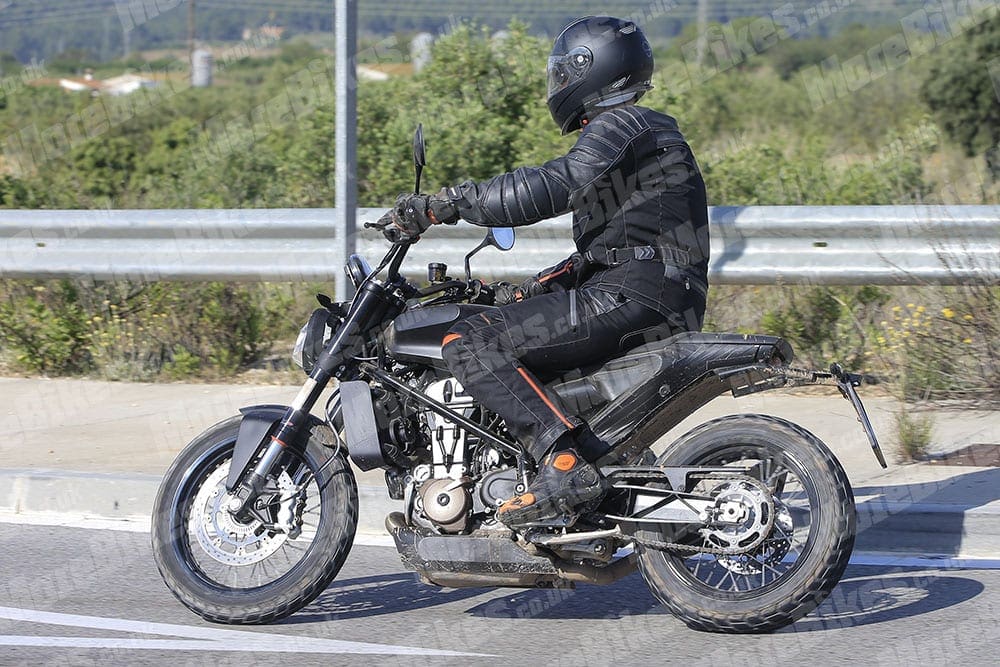 What we can see from the 701 version is that the bike has traction control with ABS on both the front and rear brakes, the bike gets Akront rims (the same as are used on the Husky 701 Supermoto) which are lightweight to make the steering feel more nimble. The spoked wheels are running 120 front and 160 rear Pirelli MT60 Scrambler tyres, so we can assume that these are likely to be OEM on the bike when it goes into production. 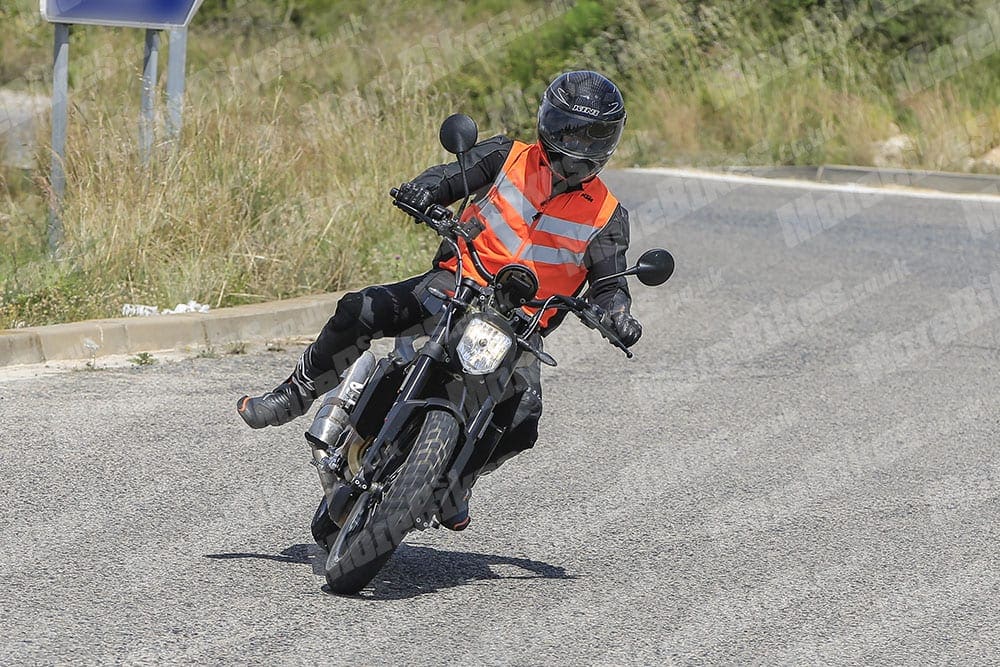 Handily, Husqvarna has also stamped a nice 701 into the footrest – just in case we weren’t sure about the bike. 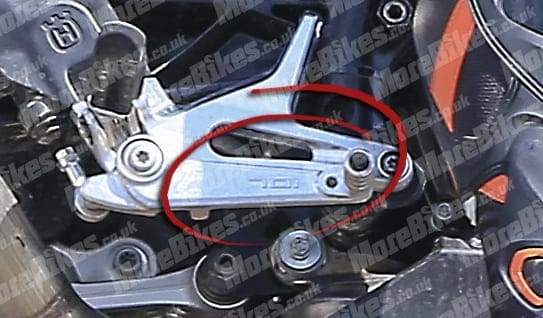 Elsewhere, the bike gets the same 43mm WP forks as are on the KTM 690 Duke R. The units have 150mm of travel and are fully adjustable for compression and rebound with the adjusters mounted on top of each fork leg (you can just see the red adjuster visible on top of the right fork). The Husqvarna also uses the triple clamp from the 690 Duke R. 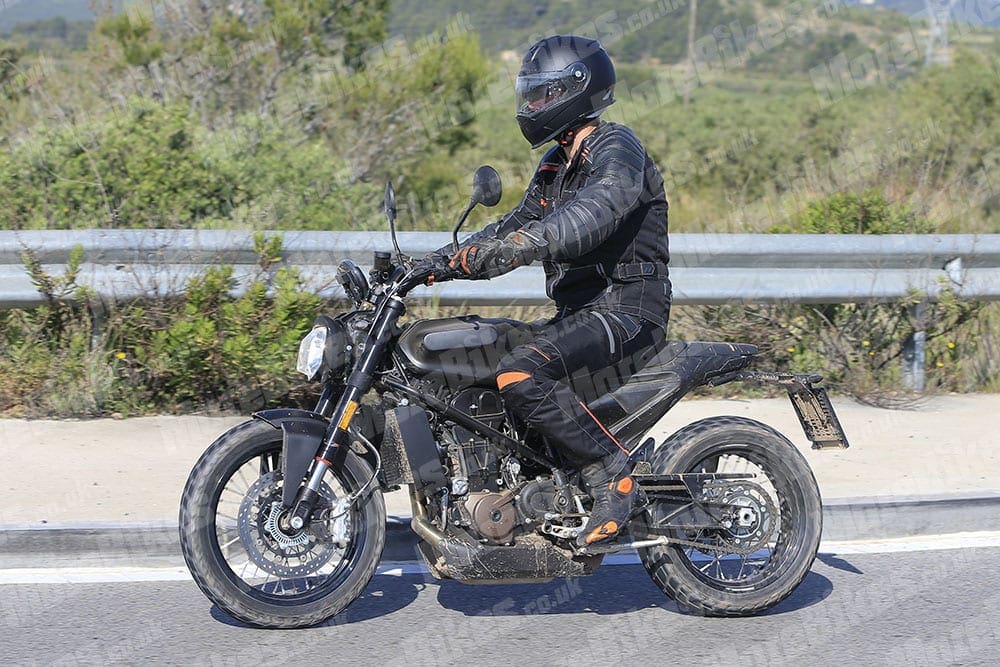 Stopping the bike is a single 320mm disc gripped by a Brembo radial caliper (this looks to be the same as used on the upcoming 890cc KTM Duke, due out at the end of this year). The aggressive look is played on with the cut-down front mudguard. 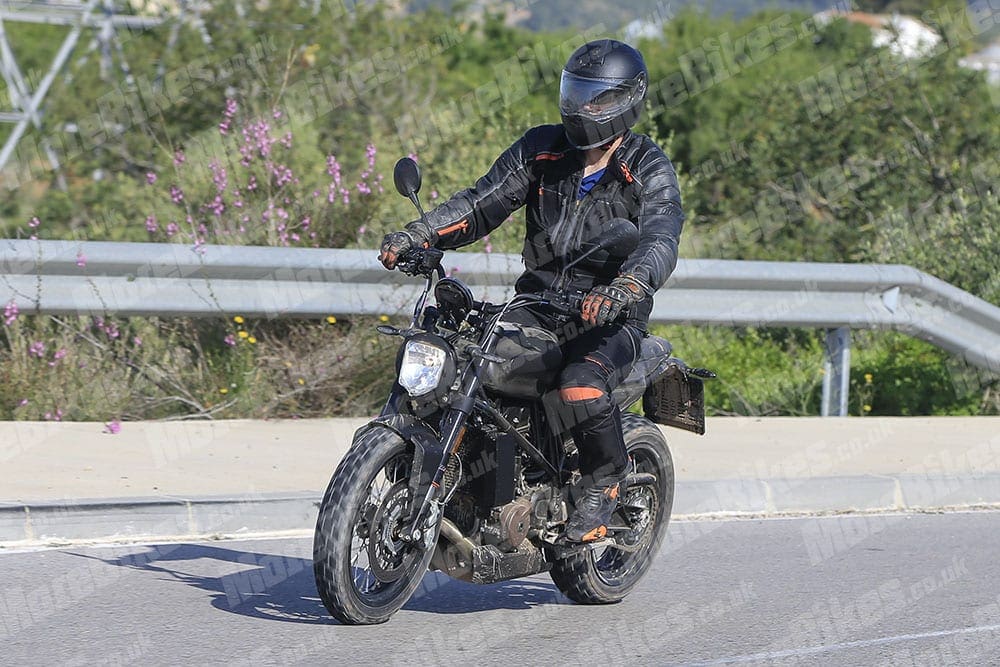 Move up the bike and the headlight might look familiar but check out the neoprene-type material shroud that’s hiding some detailing and the single dial dash that appears to be movable back and forth similar to how Triumph’s clock are able to be adjusted on the Bobber. 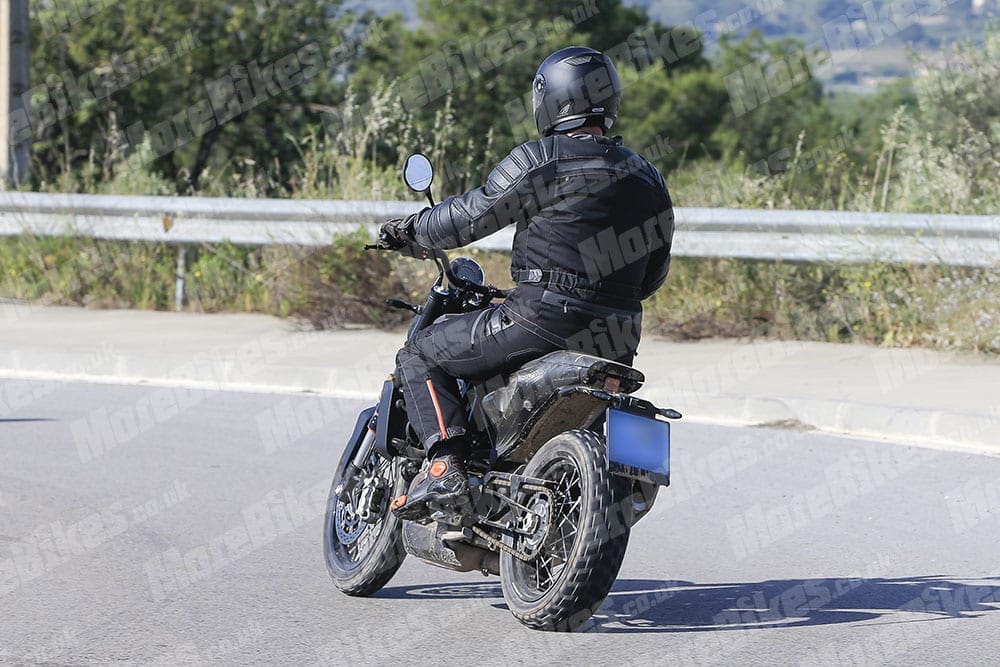 The bike doesn’t appear to have an adjustable-span clutch lever but has a front brake lever that you can dial in to suit your reach.

The exhaust exits on the right and looks pretty primitive given what we’ve seen in terms of KTM’s recent prototyping for getting rid of gases. A Euro 4-friendly collector box mounted directly under the motor looks unsightly but – on this bike at least – is part shrouded by a split belly pan. 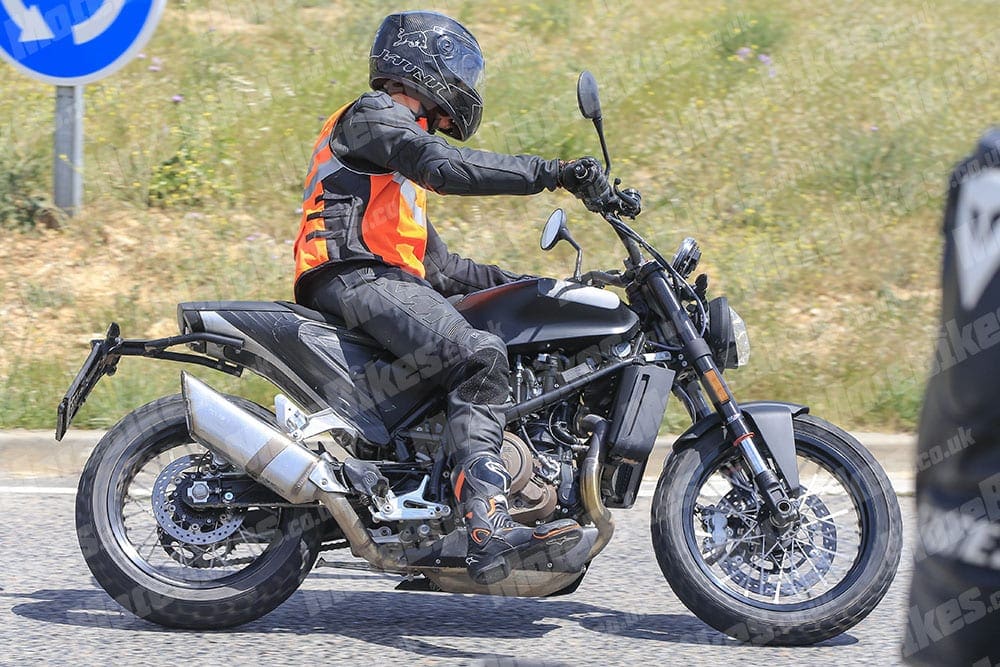 The 701’s swingarm is identical to that used on the 890 KTM prototype and there’s no rear mudguard, the entire underseat of the bike is fully enclosed to stop dirt and grime getting to vulnerable bits like a rear shock. 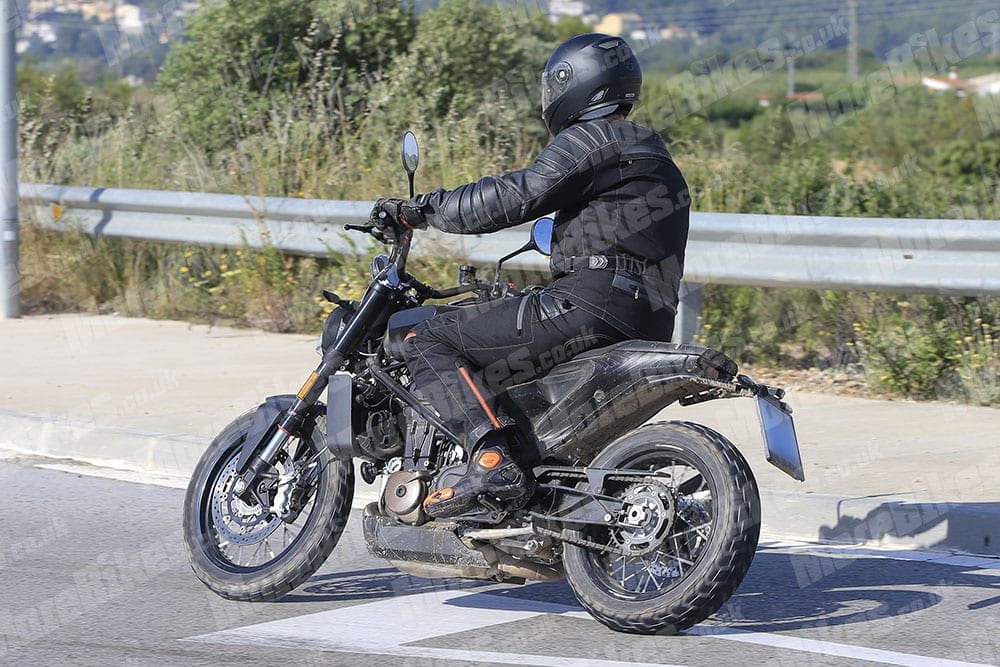 The bike’s seat is very 401-esque with it retaining the short and stubby look but is capped off pretty neatly with a four LED light cluster rear brake recessed under the pillion perch.

Although the 701 is clearly a pulling-together of various motorcycles undergoing development (and the odd bike still in production) the radiator on the bike in the photographs is all-new at about 20 percent smaller than what we’ve seen so far in the 890 KTM prototypes. 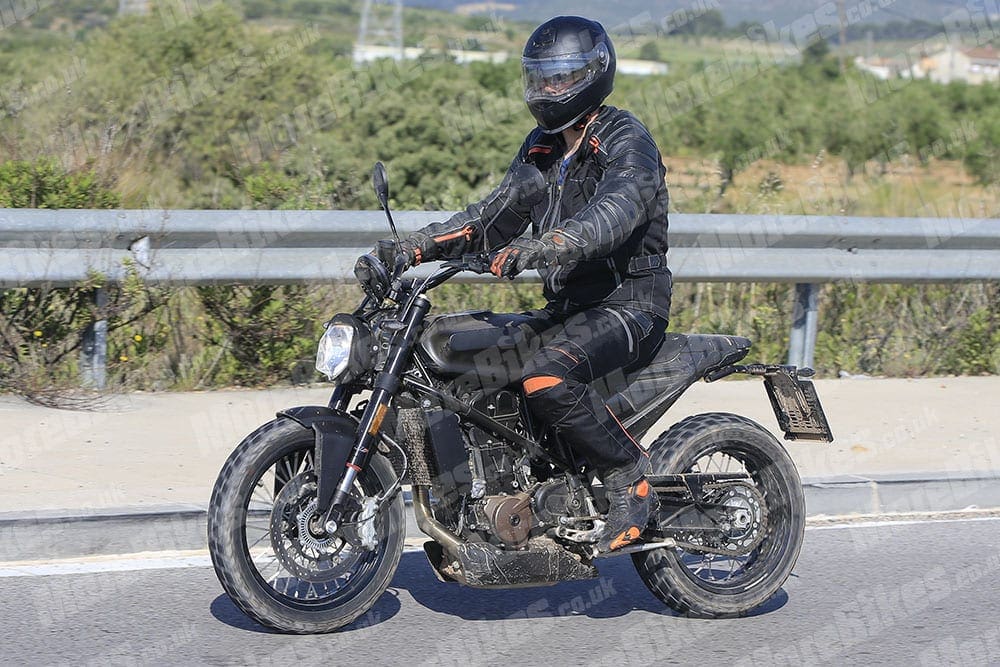