MotoGP 2017: Nicky Hayden to be remembered at Mugello MotoGP this weekend

Nicky Hayden’s race bikes will be in attendance at Mugello this weekend for the Italian MotoGP – in celebration of the Kentucky Kid’s life and incredible career on two wheels. 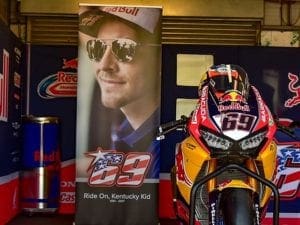 Nicky Hayden left his imprint wherever he went, and it’s clear that a great many people will miss him in the paddock.  Following the homage paid to Hayden at last weekend’s WSB round at Donington, Nicky Hayden will be remembered this weekend during Italian MotoGP, with a display of all the MotoGP and Superbike machines on which he competed.

Displayed throughout the weekend will be most of the motorcycle on which Nicky Hayden competed throughout his race career. Among them will be the Honda RC211V on which he made his debut in 2003 (with Valentino Rossi as his team-mate), as well as the following models of the Honda RC212V that he piloted, including the one on which he won the MotoGP World Championship in 2006.

And that’s not all, each rider will also be running with number 69 stickers somewhere on their machine – in support of Nicky’s family.