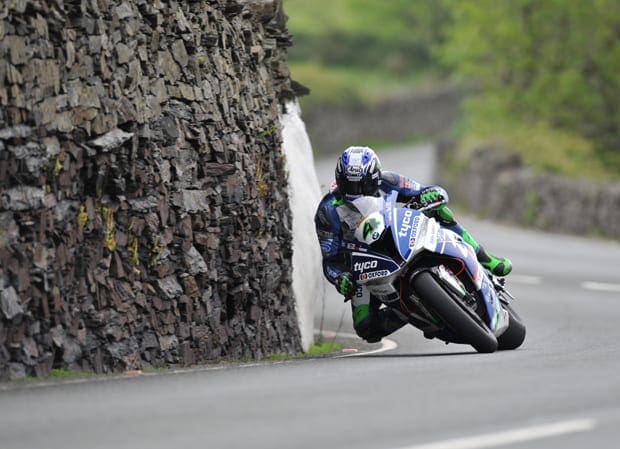 The second qualifying session for the 2017 Isle of Man TT Races took place on Wednesday evening although weather conditions meant it was a truncated session with riders completing just one full lap.

The original intention by Clerk of the Course Gary Thompson, anticipating the deteriorating conditions, was to run additional laps at full speed to Ramsey Hairpin before red flagging the riders and escorting them over the Mountain but low mist even curtailed that attempt to establish qualifying laps and give the riders time on the track.

In the limited session that was available Ian Hutchinson and Michael Dunlop again set the pace with the Tyco BMW of Hutchinson edging out the Bennetts Suzuki of Dunlop, 128.98mph to 127.23mph.

The session got underway on time at 6.20pm with the riders briefed that they may be stopped at Ramsey but on the first lap, it was clear enough to at least get a full lap in and Hutchinson, first away from the line with Steve Mercer, put down the marker with his 128mph lap to top the evening’s and overall leaderboard, such as it is to date.

Mercer lapped at 123.98mph quickly followed over the line by Dunlop who time was second quickest. Michael Rutter and Martin Jessopp set almost identical lap times at 123.96 and 123.94 respectively, having set off together whilst James Hillier was slightly quicker at 124.52mph.

Bruce Anstey completed his first lap of the week on the Honda RC211V, lapping at 124.14mph, with Conor Cummins and Gary Johnson also above the 124mph mark. However, the third quickest lap of the night came from Dan Kneen on his DTR powered by Penz 13 BMW, who posted a speed of 125.19, which saw him again top the Superstock class as he had the previous evening.

The Norton Racing Australian duo of David Johnson and Josh Brookes were picking up the pace, lapping at 123.61mph and 122.58mph respectively while Guy Martin was also quicker than the previous night with a lap of 121.42mph.

Lee Johnston was the quickest 600 on the padgettsmotorcycles.com bike, with a speed of 122.16mph but conditions were already deteriorating with fog descending on the Mountain and visibility significantly reduced.

The riders were short lapped at the start and finish but went out again with all the front runners going at full pace to Ramsey.   Unfortunately, the cloud cover wasn’t just descending on the Mountain and was now coming down on the bottom part of the circuit and it was reported that, with no airmed cover possible anywhere around the 37.73-miles course, the session was ended at 7.15pm.

Dave Sellers was reported to be off at the Gooseneck and though reported as up and okay he was later transferred to Nobles hospital with a reported rib injury.