The BMW S310RR (or TVS Apache RR 310S) test bike has been caught out again during testing in India. The clearest images to emerge so far, they reveal a selection of fresh details which confirm that the bike is pretty much ready to go – and is being prepared for the European market. 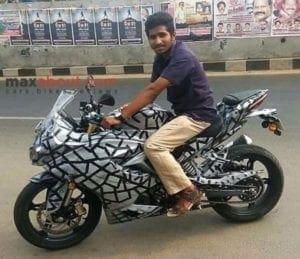 Although the test Apache RR 310S is wrapped in camouflage, the new snaps reveals quite a few previously unknown features of the faired motorcycle. A few highlights include LED DRLs, projector headlamps, an LED tail light, LED turn indicators, Michelin tyres and a vertically stacked, fully digital instrument console (which admittedly, looks a little more similar to recent KTM dashes, than those of BMW – but it’s worth remembering that BMW and KTM engineers have swapped factories to work for the rival’s marque in the past).

Powering the BMW S310RR will be the same 313cc engine as used in the BMW G310R. However, this engine is expected to be de-tuned in order to achieve higher fuel efficiency. In its stock state of the tune, this 313cc single-cylinder motor is capable of producing a power output of 34bhp while the peak torque is rated at 28Nm. However, a video we shared recently shows a Bajaj Dominar 400 unable to keep up with the Apache RR 310S test prototype, as it displays the motorcycle’s impressive acceleration and top speed (around 150kph) – so it should offer plenty of power to play with.

The up-swept exhaust unit also confirms that the bike is the BMW S310RR – as the single silencer houses a catalyst to meet current Euro 4 emissions regulations. The TVS models are being made for production in India – so they aren’t obligated to meet stringent emissions standards.

Produced to compete with the KTM RC390, Kawasaki Ninja 300 and Yamaha R3, the TVS Apache RR 310S is rumoured to be launching towards the latter end of this year in India. Sadly, nothing has been announced by BMW, so we might have a little wait before the small capacity sportbike from BMW makes it to the British market.