Maria Costello has revealed that she plans to compete in next year’s sidecar TT races, in a conversation aired on Manx Radio. 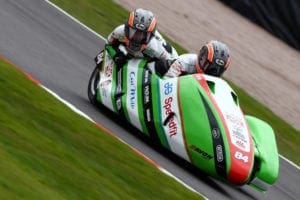 Early this year, Maria made her debut in the Hyundai Heavy Industries British Sidecar championship at Oulton Park, as part of the series’ first ever all-female team. She was joined by Kirsty Hauxwell as they competed for JG Speedfit Kawasaki alongside reigning British Champions Ricky Stevens and Ryan Charlwood.

In conversation with Manx Radio, Costello confirmed that she plans to compete with Kirsty at next year’s 2018 TT. While a number of women compete in the TT as part of mixed-sex sidecar teams, the Costello/Hauxwell pairing will be the TT’s first all-female outfit. 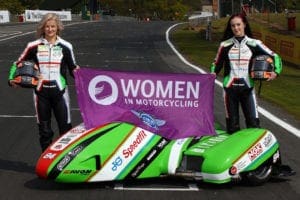 If you’ve not heard of Maria before, she’s a British motorcycle racer who, in 2004, bagged the world record for being the fastest woman to lap the Isle of Man TT course at an average speed of 114.73mph (until Jenny Tinmouth took the title at the 2009 TT).

Over the course of her 21 year racing career, Costello has won a total of eight Manx Grand Prix Silver Replicas and one TT Bronze Replica, and she was also the first woman (solo racer) in the history of the Isle of Man motorcycle races to stand on the podium when she took third place in the Ultra Lightweight category of the 2005 Manx Grand Prix.