We’ve been sent a couple of images this morning, comparing Rossi’s racebikes from Le Mans and Mugello. The more eagle-eyed among you, will spot the changes to the wing design on Rossi’s Yamaha M1. 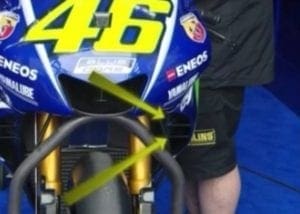 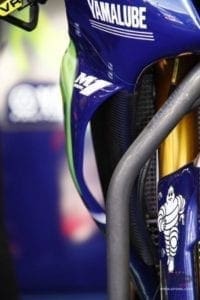 In Le Mans, Rossi’s machine was equipped with the typical internal wing, which works by offering increased downforce on the front end, and allowing faster acceleration while reducing the risk of the front end lifting – but the setup was changed for Mugello, as the M1’s cowl was extended, and wings removed.

Mugello is renowned for being one of the fastest and most technical circuits of the championship – it features numerous high speed turns, which demand a lot from a tyre over the course of a race. The changes were presumably made to reduce downforce on the front end (and given a look at Rossi’s start – below – we can confirm that it worked), and protect the tyres used on the M1 for a little longer – hopefully giving Rossi a little edge towards the end of the race.

Sadly, it wasn’t to be, as Valentino Rossi just missed out on a podium at the iconic Italian circuit (but after his injury last week, that’s not a bad result at all).  Andrea Dovizioso came away with the victory, Maverick Vinales came in second and Danilo Petrucci third.