50 years ago this week, legendary motorcycle daredevil Evel Knievel successfully launched himself over 16 cars at the Ascot Park Speedway in Gardena, California. And to celebrate, here’s a short run down on Knievel’s most spectacular stunts from his 15-year career. 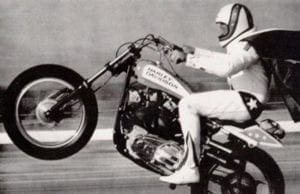 The jump that kick started Evel Knievel’s remarkable career was over a box of rattlesnakes and two mountain lions, at his motorcycle dealership in Moses Lake, Washington. Really, it was a ploy to drum up interest for his dealership, and it worked, attracting more than 1,000 spectators to the event. But, when he landed, the back tire of his bike accidentally hit the back of the crate, causing it to open and sending a gang of rattlesnakes scurrying into the crowd. Evel spent his entire career getting injured, so it’s ironic that during the first stunt of his career, his jump almost ended up causing more harm to the spectators.

Over the course of his career, Knievel completed a huge number of jumps – over 75 ramp-to-ramp motorcycle jumps (mostly astride a Harley-Davidson XR-750), in addition to his failed 1974 Sykcycle rocket jump at Snake River Canyon – so, we’re not going to be able to go into the specifics of each of his spectacular attempts – but there’s (at least) a couple more that deserve a mention. 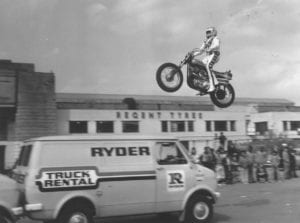 In 1971, Knievel made his way to the Astrodome in Houston, Texas. It was a massive event, as one of the greatest daredevils to ever ride two wheels visited one of the greatest stadiums in the world, soaring over 13 cars in front of record-breaking 100,000 people over two days (and he even managed to land both jumps too).

In 1974, a motorcycle just wasn’t quite enough for Evel – so he instead, opted for a rocket. Called the Skycycle X-2 and powered by steam, the vehicle blasted him into the air over Snake River Canyon, located just outside Twin Falls, Idaho (the next best location after being denied access to the Grand Canyon). However, a malfunction with the parachute caused it to deploy upon take-off, and the resulting drag made the jump unsuccessful, and pulled the craft down into the canyon. Somehow, Knievel walked away with only minor cuts and scrapes, but had the parachute deployed a few second earlier, he most likely would’ve drowned as he was securely strapped to the rocket and would have been unable to easily escape.

Attempting to rebound from his failure at Snake River, Knievel travelled across the Atlantic for his first and only performance in Europe, in front of 80,000 people at Wembley Stadium. Evel flung himself at 100 mph over 13 buses, crashing as he attempted to land, and breaking his back in the process. While Knievel would tell the crowd in a moment of defeat “I will never, ever, ever jump again,” he still refused to use a stretcher and walked off the field, saying, “I came in walking, I went out walking!”

If anyone deserved to walk around wearing a white leather suit and cape, not to mention a diamond encrusted walking cane, containing Wild Turkey whiskey, it was surely him… 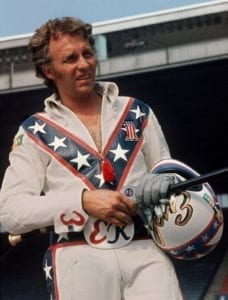