TT 2017: Birchall brothers take first in race one of the Sidecar TT

Ben and Tom Birchall took a dramatic victory in the opening Sidecar race at the 2017 Isle of Man TT, coming home over twenty five seconds clear of John Holden and Lee Cain, who finished second. 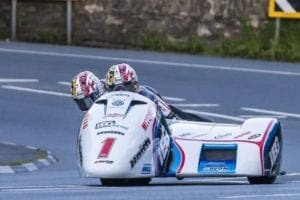 The duo won in a new race record time, and they blitzed the lap record too, achieving an incredible lap of 117.119mph, which is over two seconds faster than the previous lap record (which they set last year) – despite the more challenging track conditions, and changeable weather

The top three pairs were;

Speaking to Manx Radio TT at the end of the race, Ben Birchall said, ‘the bike’s good, the team’s good, it’s all there.’ He went on to say, ‘we could have gone a bit more on the last lap, but it was a bit wet up the up there so I just thought I’d bring it home.’

It’s been a good year for the Birchall brothers, who currently sit at the top of the FIM World Sidecar Championship, remaining unbeaten during the first two championship rounds – and now they have another TT under their belt too. And if they put in another performance like this later in the week for the second Sidecar TT race, they’re sure to be walking away with even more silverware.