Michael Rutter comfortably won this afternoon’s Lightweight TT, aboard his 2014 Paton S1 – his first win since 2015, and his fifth TT win overall. Leading right from the off, Rutter managed to put 8.8 seconds between himself and second place Martin Jessop by the end of the race. Finishing up the top three was Peter Hickman, who came in 40.4 seconds behind Jessop. 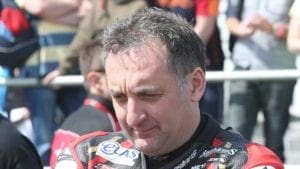 In a field packed with potential race winners, Ivan Lintin was the man to beat. The RC Express Racing rider has won the four-lap race for the last two years, and started in pole position, hoping to make it a hat-trick in 2017.

And yet, it was Michael Rutter who took the lead, with Ivan Lintin sat in fourth, behind Stefano Bonetti and Martin Jessop. At the end of the first lap, Rutter was pulling away, putting 4.4 seconds between him and Bonetti, while Martin Jessop, Ivan Lintin and Peter Hickman trailed behind.

By Glen Helen on lap two, Jessop had jumped ahead of Bonetti, Ivan Lintin sat in fourth place 8.8 seconds behind, and Peter Hickman was hot on his heels.  Passing through the Grandstand on the second lap, Rutter had managed to secure a commanding 10 second lead – but it was time to head into the pit lane (for a quick refuel and tyre change). Martin Jessop pulled away quickly, getting out ahead of Michael Rutter – and by Glen Helen on lap three, Jessop was only 2.8 seconds off the lead, with Peter Hickman 25.3 seconds behind.

By Glen Helen on lap four, Rutter had managed to pull away from Jessop once again, leading the race by 8.5 seconds and Hickman remained in third, 28.9 seconds behind. And by the finish, things stayed much the same, with Rutter first, Jessop second and Hickman third.

The final race of the day is the Zero TT, which is set to start at 16.25pm. During qualifying Mugen continued to dominate, with reigning champion Bruce Anstey (riding in John McGuiness’ place) set the pace, lapping at 109.52, over 12 seconds quicker than his Mugen team mate, Guy Martin.

Guy has sat out of most of this week’s racing, following his off at Doran’s Bend earlier this week. Will he be out on the field this afternoon? Could the Zero TT race yield Guy his first TT success? It’s a possibility but clearly his team mate, will surely prove immensely hard to beat.