Bruce Anstey set off quickly, and by Glen Helen had put 10.7 seconds between himself and his second place teammate, Guy Martin – and by Bungalow, Anstey had stretched the lead to 34.8 seconds, with Daley Mathison sat in third on the University of Nottingham machine – and that’s how things end up. Anstey – 1, Martin – 2, Mathison – 3. 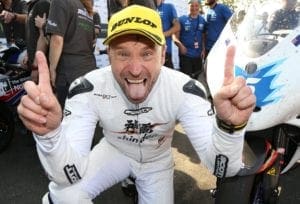 During qualifying Mugen dominated, with Bruce Anstey (riding in John McGuiness’ place) setting the pace, lapping at 109.52, over 12 seconds quicker than his Mugen team mate, Guy Martin – and that set the scene for the TT Zero race, with Mugen once again dominating the top two spots on the podium. 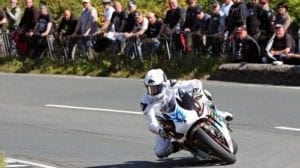 Bruce Anstey took the win last year on the Shinden Team Mugen electric machine, but interestingly failed to improve his previous time. This wasn’t necessarily because of any lack of technical improvements, but due to Anstey backing off to secure a safe win, having passed his main rival John McGuinness. On finishing the race, Anstey said: ‘the bike still has lots of battery left’ – which means the machine is probably capable of putting in a faster lap in the future.

Guy has sat out of most of this week’s racing, following his off at Doran’s Bend earlier this week – and has decided to sit out of this aternoon’s Senior TT, so it was a pleasant surprise to see him out on the Mountain course for the Zero TT – and surely he’ll be pleased to get on the podium after a frustrating week.

Next up on today’s race schedule is the second Sidecar TT race – followed by the Senior TT later today. We’ll be brining you the latest news and announcements throughout the final day of racing on the island.