Ian Hutchinson has suffered a broken femur, after crashing out of the 2017 Isle of Man Senior TT – causing a full course red flag. 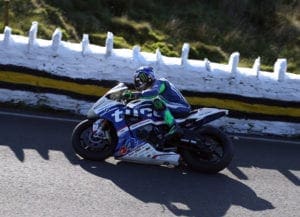 Hutchy came off at the 27th miletone – after an epic one and a half lap battle with Peter Hickman. However, as the Bruce Anstey came into the pit lane, red flags were shown on Glencrutchery road. It was initally unclear who was involved in the incident, but Tyco BMW team have posted on social media, confirming it was Hutchinson involved – and that he is conscious, and on his way to Nobles Hospital by helicopter with suspected leg injuries, since confirmed as a broken femur.

TT organisers have opted for a full re-start of the race, with four instead of six laps. Racing has been scheduled to get underway at 5.15pm –  once marshals have cleared the track of debris.