After an 11 year absence, Laverda has just unveiled its new prototype called the SFC / 4. 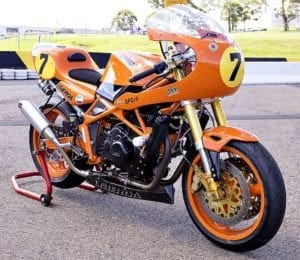 While it’s only a prototype at this stage, the SFC / 4 sportbike did a couple of laps of the Sydney Motorsport Park during the Sydney International Festival of Speed – as part of celebrations of the history of Italian GP motorcycle racing.

The bike has been built by Piero Laverda and a collection of former factory employees, using a tubular truss frame and an air-cooled two-cylinder 688cc engine – which Laverda aficionados should remember from some of the Italian brands machines from the ’90s, including the Diamante and Ghost Strike.

Laverda said: “To re-establish the brand and to be able to sell some bikes at a relatively affordable price is our goal. The machine we brought to Australia is therefore not set to remain unique; we’re planning dozens of pieces, either in the form of completely new motorcycles or in the form of part-cycle kits.” 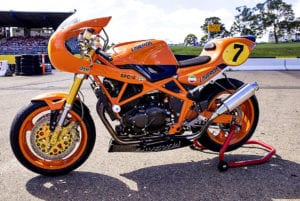 The specifics of how this project will move forward are still uncertain – with the brand no longer owned by the Laverda family. In fact, the brand has been lying dormant for the past 11 years, after being purchased by the Piaggio Group in 2006.

Is Piaggio indifferent to the possible renaissance under the Laverda Corse name? Do they see it a good chance to test the brand’s popularity at a low cost? Or are Piaggio in talks to off-load the brand to an interested party?