Following frequent sightings of the Akula testing over the last few months, TVS has finally confirmed that the bike will be making it the Indian market this August – and it’s rumoured to be priced at £2150. 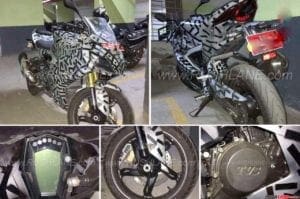 Showcased as a concept at the 2016 Auto Expo, the hotly anticipated TVS Akula RR 310 S (or BMW S310 RR) has been caught during testing in India once again. The snaps show the bike in its (nearly) finished form – with TVS confirming that they expect the bike to be on sale in India from August 2017.

The Akula is based on the 2017 BMW G310R naked bike, which was created as part of the BMW-TVS partnership, which sees the brands working together to create a range of sub 500cc machines. The Akula shares its 313cc single-cylinder liquid-cooled engine and 6-speed gearbox with the G310R.

The latest photos to emerge show the Akula in its fullest form yet, highlighting its upright riding position, combined with sport oriented foot pegs – which should help the bike feel just at home on the track as it is on the road. 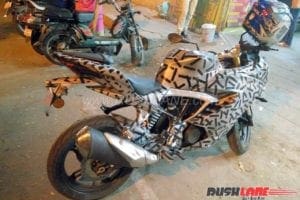 For a full range of machine specifications – follow the link to the story below.

Produced to compete with the KTM RC390, Kawasaki Ninja 300 and Yamaha R3 – we’re still waiting for confirmation from BMW about the existence of the S310 RR, so it’s presumably still a way off making it to market in the UK. But with the Akula set to hit the streets in India very soon, the S310 RR surely can’t be far away.