Finnish police employed an unusual technique in an attempt to stop a motorcycle thief on the run.

The video shot from the helmet camera of the thief, shows him speeding off on the stolen dirt bike with the police in hot pursuit. As the rider continues to try and make his escape, the police van pulls up alongside him.

An officer then leans out the window and pepper sprays the rider in his face – as the two vehicles race at high speeds along the road. The van then pulls in front of the bike, slamming its brakes to try and stop the thief in his tracks. 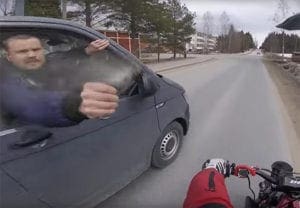 The biker manages to dodge the blockade and ride off – as the spray begins to slowly seep through his visor. He takes the bike off road, and can be seen tearing across snowy terrain, eventually dumping the bike behind a bush.

Reportedly, the thief was known to the police and was later captured and the bike retrieved.