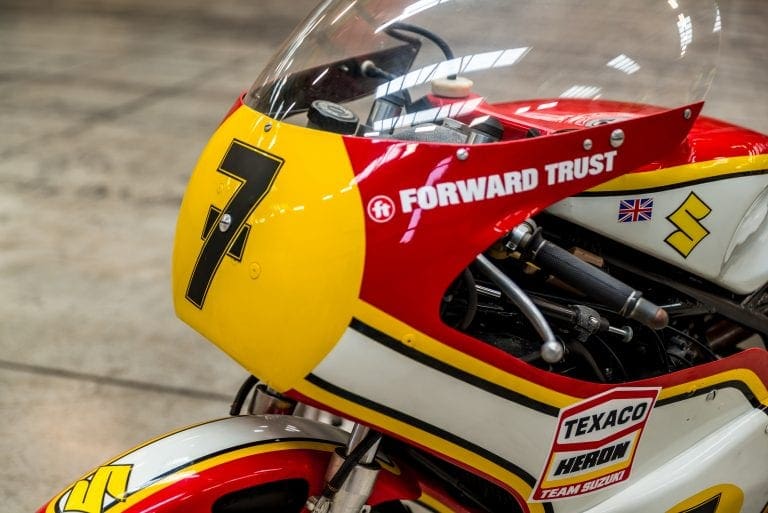 Barry Sheene’s 1976 world championship-winning XR14 – which has been restored with the help of Suzuki’s Vintage Parts Programme – will be ridden by his son Freddie at this year’s Sheene Festival at Oliver’s Mount on 22-23 July.

The bike, which carried Barry Sheene to victory in four Grands Prix in 1976, was recently restored by former Team Suzuki mechanics Martyn Orgborne and Nigel Everett. Freddie will ride the iconic machine in a special parade session during the weekend, while Steve Parrish will ride the 1977 XR14 that Barry also rode to world championship glory. There will also be a display of other bikes raced by Barry Sheene, and a collection of his leathers.

Suzuki, sponsoring the event for a third consecutive year, will be bringing a fleet of display bikes, including the Team Classic Suzuki Katana and a number of race bikes from the firm’s decorated history. The original GSX-R750F that was restored as part of the 30th anniversary celebrations will also feature, as will the GSX-R1100 restored by Suzuki’s apprenticeship programme and the TL1000S built from new parts.

The event, held at the only true road-race circuit in England, will also feature a full programme of 21 races, a trade village, and live band on the Saturday night.

Freddie Sheene said: “I’m really looking forward to the Oliver’s Mount event, not only for the usual atmosphere but for the fact that the public will be able to see the ‘76 and ‘77 world championship-winning bikes back where they belong. Those bikes laid dormant for the past 40 years and it’s a special moment for everyone to be a part of. The whole process of bringing the bikes back to life wouldn’t have been possible without the help from Suzuki GB and most importantly Martyn Ogborne and Nigel Everett; they have put over 600 hours between them to make this happen. I’m looking forward to seeing everyone over the weekend; let’s just hope the weather stays in check.”

Scott Beaumont from Oliver’s Mount, commented, “To say we are excited about seeing Barry Sheene’s world championship-winning bike riding around Oliver’s Mount again is an understatement. Then the fact that his son Freddie will be riding it simply gives us goosebumps. This is an incredible opportunity to see this bike ridden in the UK for probably the final time. We simply cannot wait for the festival to get underway, and we hope to see all fans of Sheene, Suzuki, Classic Bikes and riding legends attending. See you all trackside for what is likely to be a once in a lifetime event.”

Suzuki GB aftersales marketing coordiantor, Tim Davies, added, “We’re delighted to be backing the Sheene Festival again this year, and we’re really looking forward to watching Freddie ride Barry’s championship-winning machine RG500. It’s been really special to be involved in the restoration of such an iconic machine, with the help of the Sheene family. It was great to watch it come together, and it’ll be even more special to see Freddie ride it at a circuit that Barry loved and enjoyed much success at.”

The 2017 Barry Sheene Festival will take place at Oliver’s Mount on 22-23 July. For tickets and event information, visit www.oliversmountracing.com.

You can watch the first part of the video documenting the restoration HERE and the second part HERE.