Spy shots: Ducati V4 Superbike caught in action (worth showing you again after we posted this LAST WEEK)

We’ve been sent the first photos of Ducati’s V4 Superbike project – and it looks awesome.

Admittedly, we’ve just found it the story made it onto Asphalt and Rubber and MaxxMoto first, so credit where credit’s due – but it’s a fantastic story, and we just couldn’t ignore it.

Sources reckon that the V4 engine will borrow elements from both the Superquadro v-twin engine design, and the Desmosedici V4 – sharing much with Ducati’s MotoGP powertrain. 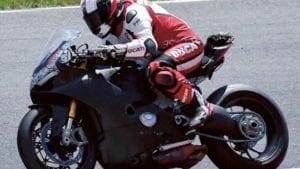 It’s been a busy week for Ducati – as the iconic Italian brand has made the headlines multiple times. First it announced that the ‘Final Edition’ of the Ducati 1299 Panigale would debut at Laguna Seca. Then, it was revealed that Harley-Davidson are preparing to bid for the ownership of the Ducati brand – and it also revealed its brand new Multistrada Enduro Pro. And now, we have what appears to be the very first photos of Ducati’s V4 superbike project.

In the images, we can see that the new V4 superbike has a the single-sided swingarm and underslung exhaust, which aren’t too dissimilar from the existing Panigale design. Our sources have also revealed that the V4 superbike will continue Ducati’s ‘frameless’ chassis design, with the headstock, swingarm, and rear subframe attached directly to the engine. 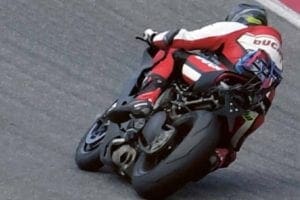 One noticeable difference we spotted from the images, is the rear cylinder bank of the engine, which is raked rearward on the chassis – far more than we have seen with any other Ducati engine, excluding the Desmosedici GP machine, of course. This is important as it would probably aid Ducati in its chassis balance problems.

It’s likely that the Ducati V4 Superbike will make its debut later this year at the EICMA show in Milan – but as images, specs and information are revealed in the interim, we’ll be sure to keep you up to speed.