Following the recent surge of motorcycle and scooter thefts, the Metropolitan Police is launching a ‘Be Safe’ campaign urging riders to use more security to avoid theft. 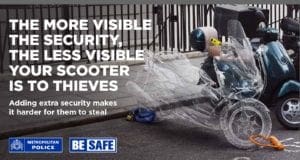 “The more visible the security, the less visible your scooter is to thieves: adding extra security makes it harder for them to steal” – is the message of the Met’s new short, hard-hitting film and advertising campaign, urging riders of scooters, motorcycles and mopeds to use more security to avoid the theft of their vehicles.

The campaign encourages riders to layer up their security to reduce their vulnerability to thieves. In many cases, owners have inadequate security or no security at all, making it easy for thieves to steal them and then use them to commit snatch and robbery offences. Security measures alone cannot guarantee a bike or scooter will not be stolen, but every step taken makes it less attractive to a thief. The film shows not only how easy it is for thieves to steal vehicles that have not been adequately secured, but that thieves are less likely to target bikes with two locks, put off by the time involved in stealing them.

Police Commissioner Cressida Dick is launching the campaign this morning in St James’s Square in Westminster – a key borough affected by the theft of scooters. Officers will be speaking to commuters about properly securing their scooters, motorcycles and mopeds.

As well as similar events being held across London, the campaign will be advertised on buses travelling through some of the top scooter theft hotspots in London – Westminster, Wandsworth, Tower Hamlets, Lambeth, Southwark, Haringey and Hammersmith and Fulham. There will also be leaflets, a social media campaign and vinyl stencils printed onto dedicated parking bays in hotspot boroughs, reminding riders to use more security.

This campaign supports Operation Venice, the Met’s response to scooter, motorcycle and moped related crime, which has seen a rise in offences across London. Figures show that over 15,000 scooters, motorcycles and mopeds were stolen in London in the last year – more than half of all stolen vehicles in the capital – and scooters were used in the commission of over 14,000 crimes (rolling 12 months June 16 – May 17).