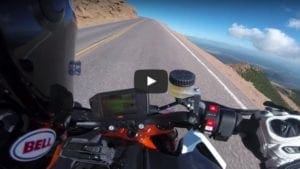 Following the successes of Ducati and Kawasaki over the years – KTM has stepped up its game, sending a KTM 1290 Super Duke R to Colorado Springs, and entrusting factory rider Chris Fillmore with the task of taming the beast on the 1000m ascent to the top.

And the result could not have been more satisfying for the Austrian brand, as it won the ‘heavyweights’ category, and set a new absolute record by almost 10 seconds.

American road racing star Fillmore took just 9 minutes, 49 seconds and 625 thousandths to complete the dangerous, winding mountain course. He said: “I had a goal that was none other than to put my name in the book of records. It’s hard, because I have experience in closed circuits where you can give 100 laps in paths of 3 or 4 km. This time I only made 4 or 5 climbs … it’s difficult, but it’s a very special feeling to be up here. ”

KTM has got to be chuffed with that result – and surely there is no better way to promote the jewel of its range? Either way, here’s an impressive on-board video of Chris’ helmet during the Sunday’s race.