Here’s our first look at the new Spirit ST tyre from Avon – and we’re fans already. Take a peak at the video and then read out launch-report on a variety of a bikes kitted out with the impressive hoops. You’ll like these. We do. 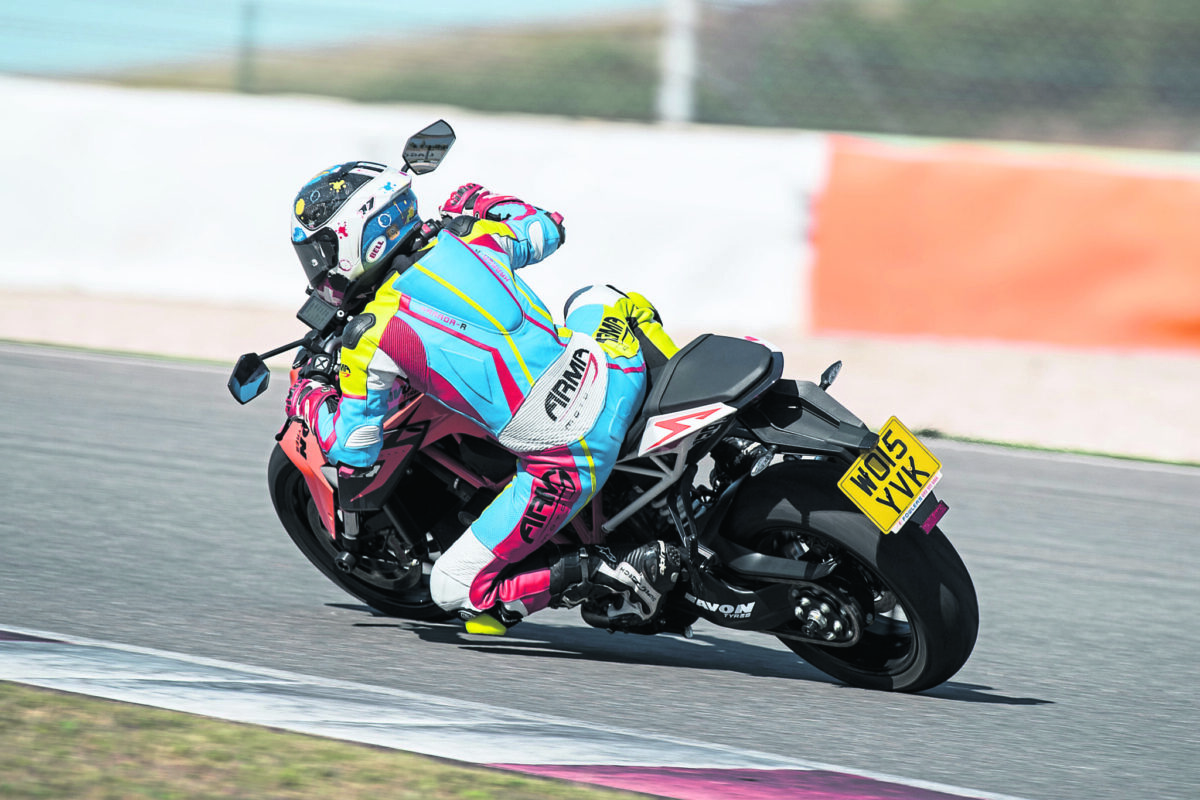 Carl Stevens went to the world launch of the Avon Spirit ST in Portugal to see if the all new model really is a solid, all round hypersport touring tyre…

Hypersport and touring aren’t really two categories you’d have put together 10 years ago yet nowadays the two almost come hand in hand with the evolution of high performance machines offering long range and every day rides with ease. This means tyres also need to evolve, and following on from its competitors Avon has unleashed a whole new model for its attack on the market – which is said to offer up to 10,000 miles on a single set.
This is all thanks to the new technologies used: the Advanced Tread Arc Combination, Enhanced Stability system and Lifetime Profile Engineering on the tyre work collectively to create consistent stability with stress distributed evenly throughout the carcass; meaning the varied tread profile can work to its full potential while keeping the tyre temperature down to give the maximum mileage possible, even if you want to push on a little on occasion with the new 3D Sipes offering a quick warm up time.
If that wasn’t enough Avon has worked incredibly hard on improving the wet grip; a combination of Super Rich Silica and a tread pattern produced for enhanced aqua flow mean that the new Sprit STs really should hold up well in the wet – you can almost tell they’re made and produced in Britain… 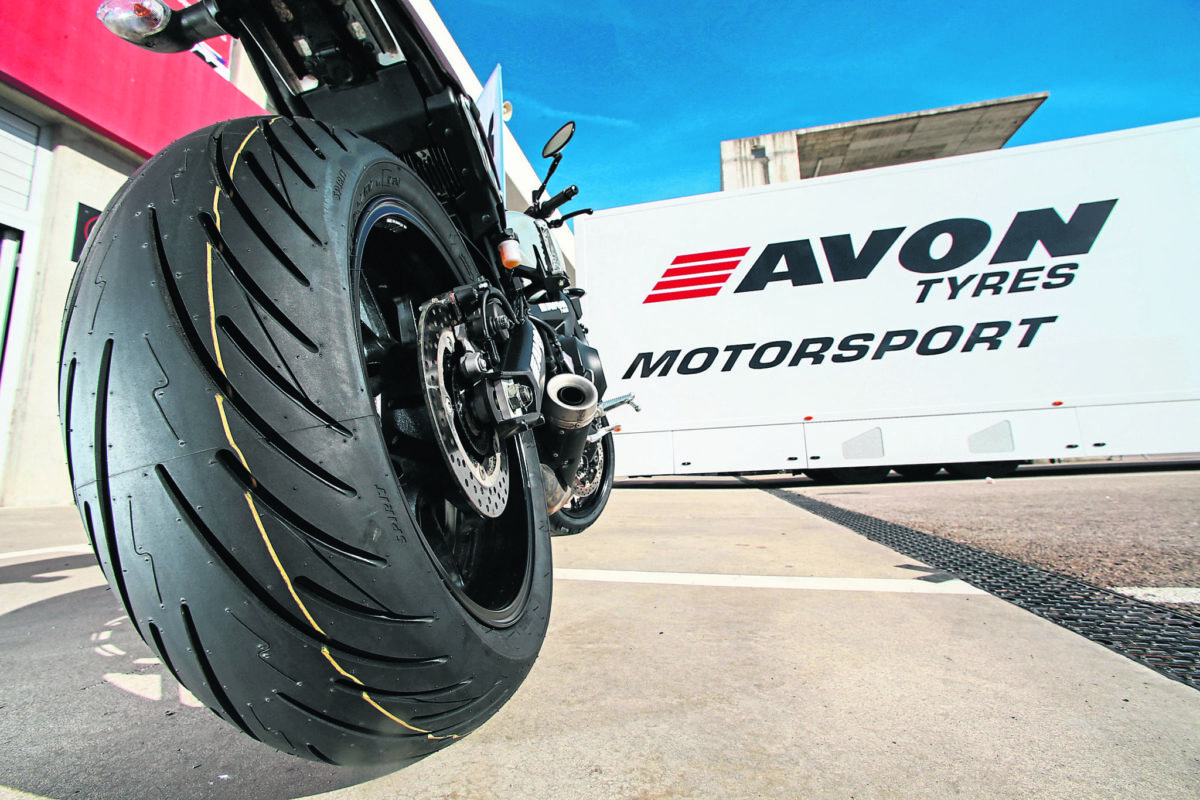 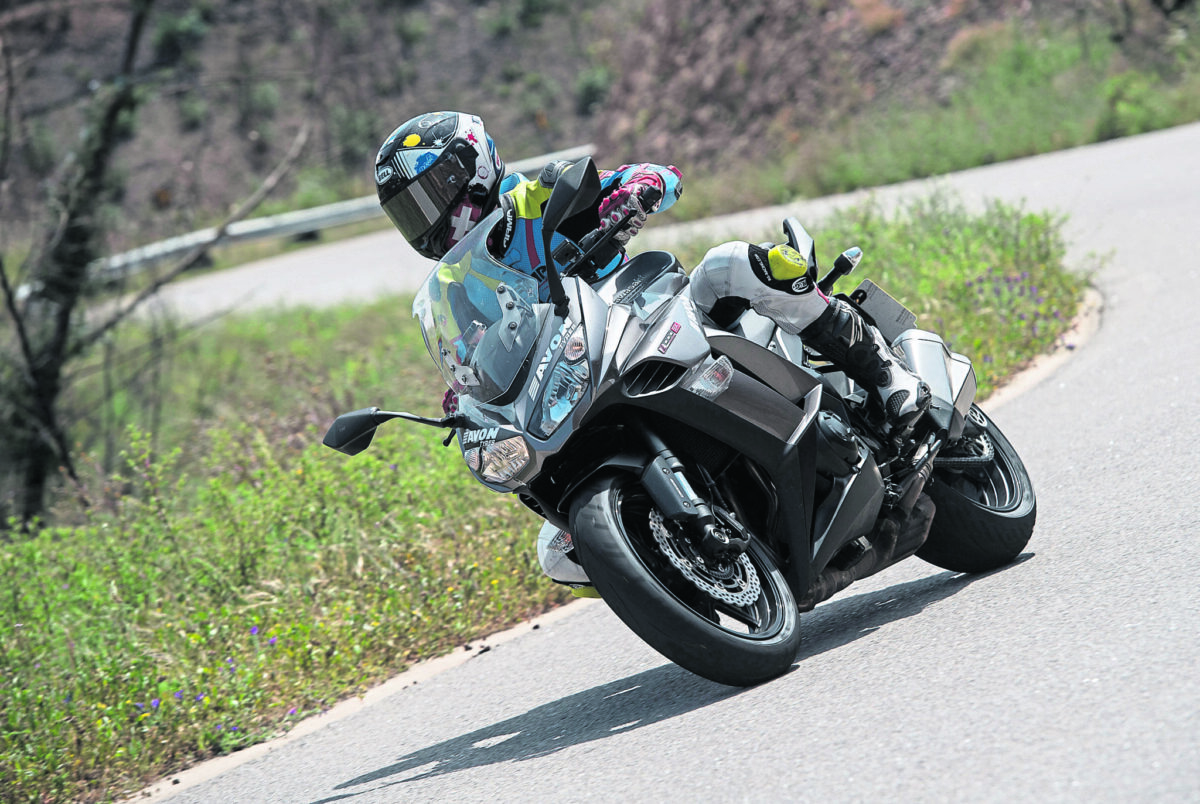 How does the new tech hold up?

Before we got to tackle the roads and the track, we had the opportunity to try out the Spirit ST’s wet weather braking performance; an aspect which has seen massive improvement from the previous Storm 3D X-M tyre. With a tread pattern looking like almost a solid wet weather tyre it was incredibly exciting to fire down the sprinkler-covered tarmac patch; cranking up to about 35mph on a big old Suzuki Bandit before jumping on the front brake as hard as possible with absolutely no trouble at all. Those inverted front grooves on the front tyre really do displace the water incredibly well, and no matter how hard you hit the brakes (even with an ancient ABS system), the Spirit ST gives an incredible amount of confidence and grip – perhaps the best in its class. 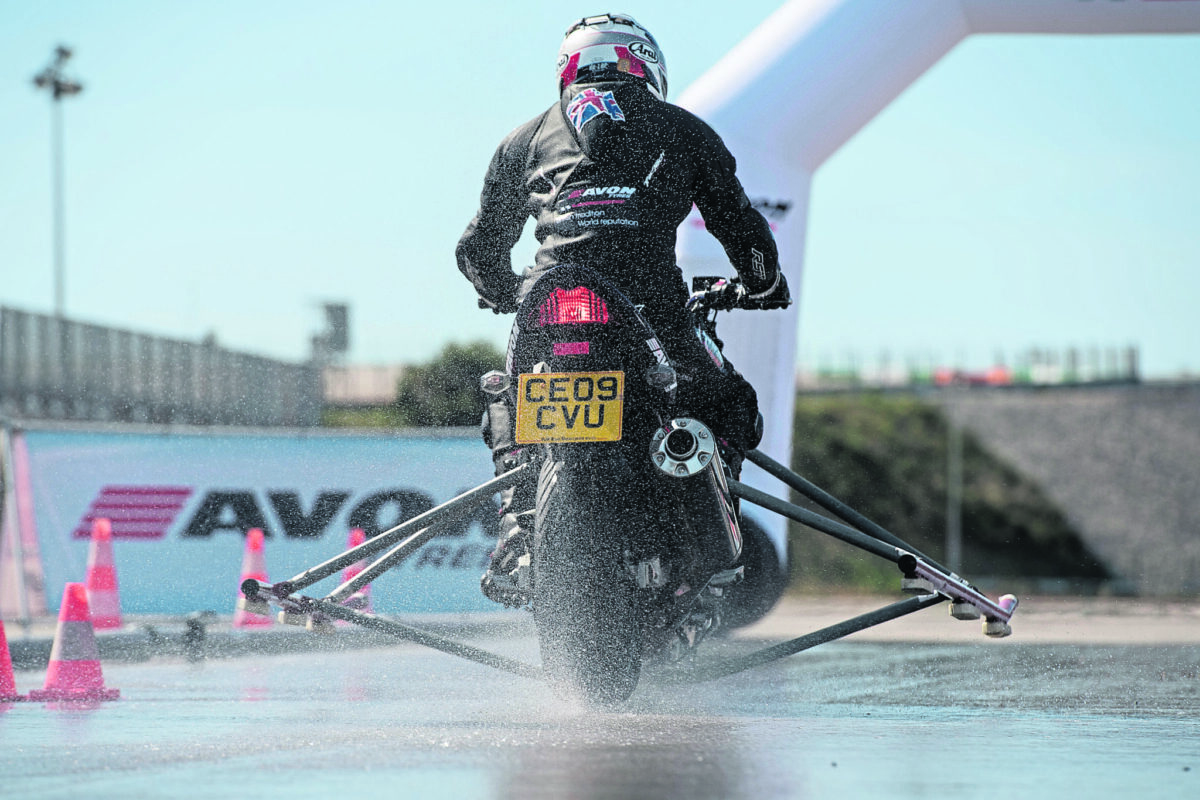 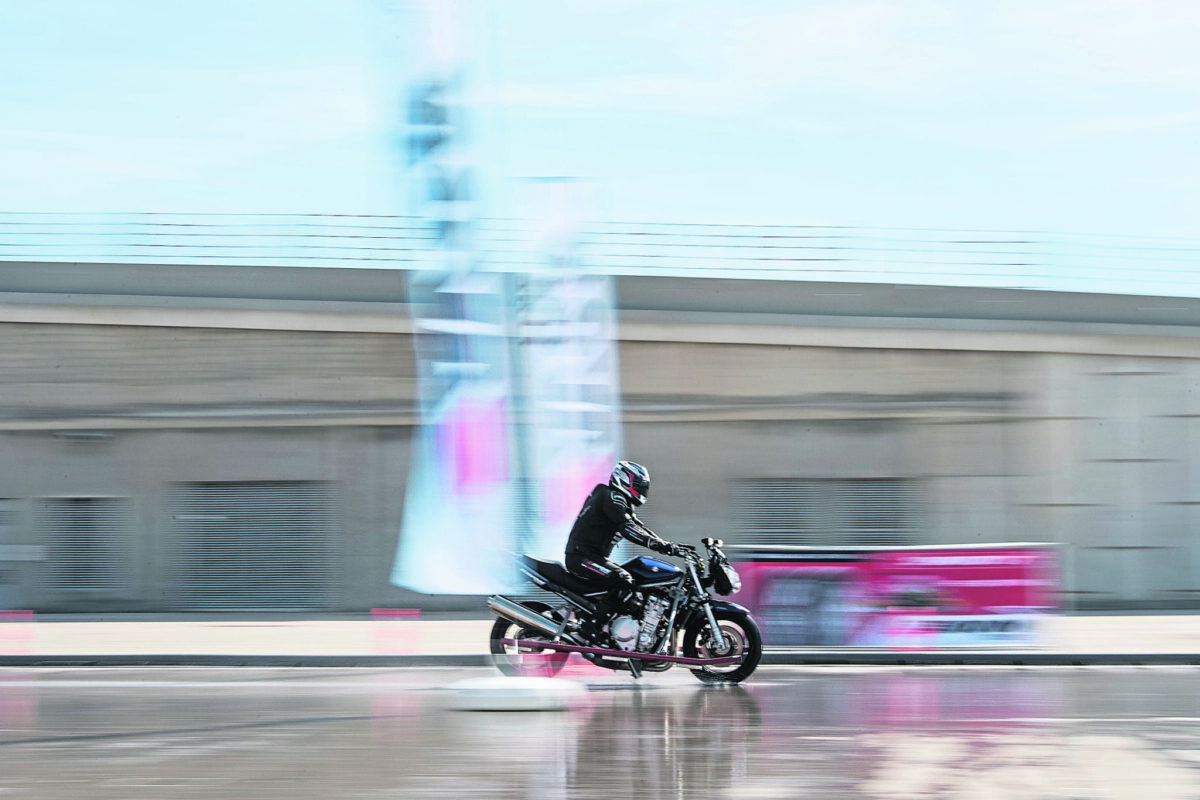 So in the little wet weather test they excel, but how do they hold up in the dry?

With a host of bikes on offer varying from a Honda Crossrunner to a KTM Superduke, it’s fair to say Avon wasn’t aiming for full on track bike with its selection by any means. I managed to nab a Kawasaki Z1000SX and GSX-S1000F to attack the bumpy roads surrounding the Portimao race track for starters, for a pretty solid example of a hypersport touring machine. With the route consisting of incredibly technical tightening  hairpins, fast blind corners and an unbelievably bumpy and undulating surface it took a few runs to gain some confidence and familiarity, before being able to push on a little with the Sprit STs. Initially, the tyres gain heat incredibly quickly thanks to the 3D Sipes, but even after a few runs they aren’t getting too hot, which means that limited flex in the grooves really is doing an impeccable job as the temperatures climb up in the mid-20s. 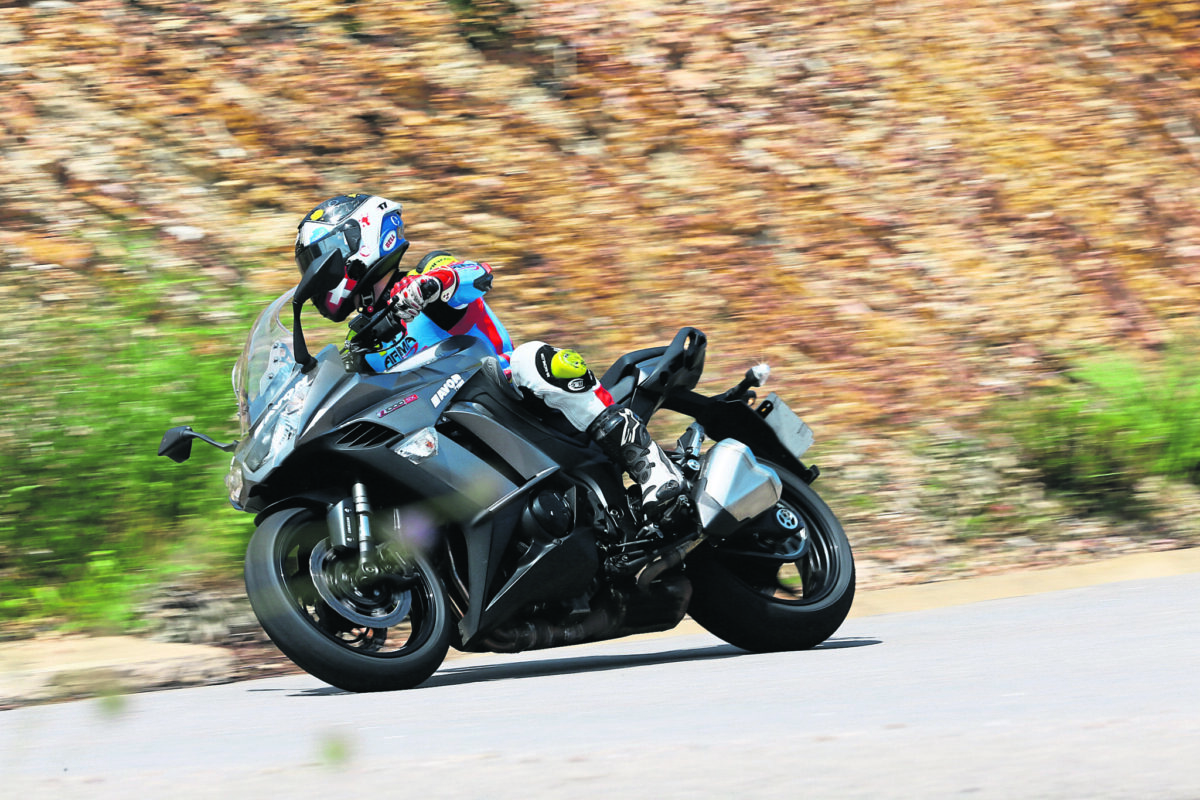 They also offer some pretty impressive stability both front and back as the Kawasaki eats up the massive bumps and challenging surfaces, with the Advanced Variable Belt Density truly delivering an impressively stable tyre footprint – even at lean angle. This is incredibly impressive considering the longevity the Spirit ST offers, and even jumping on the Yamaha XSR900 the same predictability is matched with an impressive level of grip and no drama whatsoever on the brakes, mid corner and through corner exit. With the route now etched deep in my mind it was time to take things up a notch though, which meant a quick buzz on the KTM 1290 Superduke to see how well the Sprit ST could deal with some real hypersport. In all honestly they weren’t too shabby in the slightest; this is where the Reactive Footprint really does earn its stripes, as you can feel the enlarged contact patch squirm under the KTM’s monstrous amounts of torque. As you start to pull the pin the Spirit STs deal adequately under a moderately fast road pace, which is a real necessity for the market they’re aimed at. But what happens when you open up the taps that little bit more?
For that, we had the World Superbike spec track of Portimao to play on. Given basically an open pitlane and three hours of tyre shredding antics it was going to be a real test of longevity and character – especially as the air temperature is hot enough to leave me with a bright red skin tone. Easing into proceedings it was Triumph’s Street Triple that gave me my first taste of the Spirit ST’s capabilities while learning the incredibly technical circuit and its undulations. 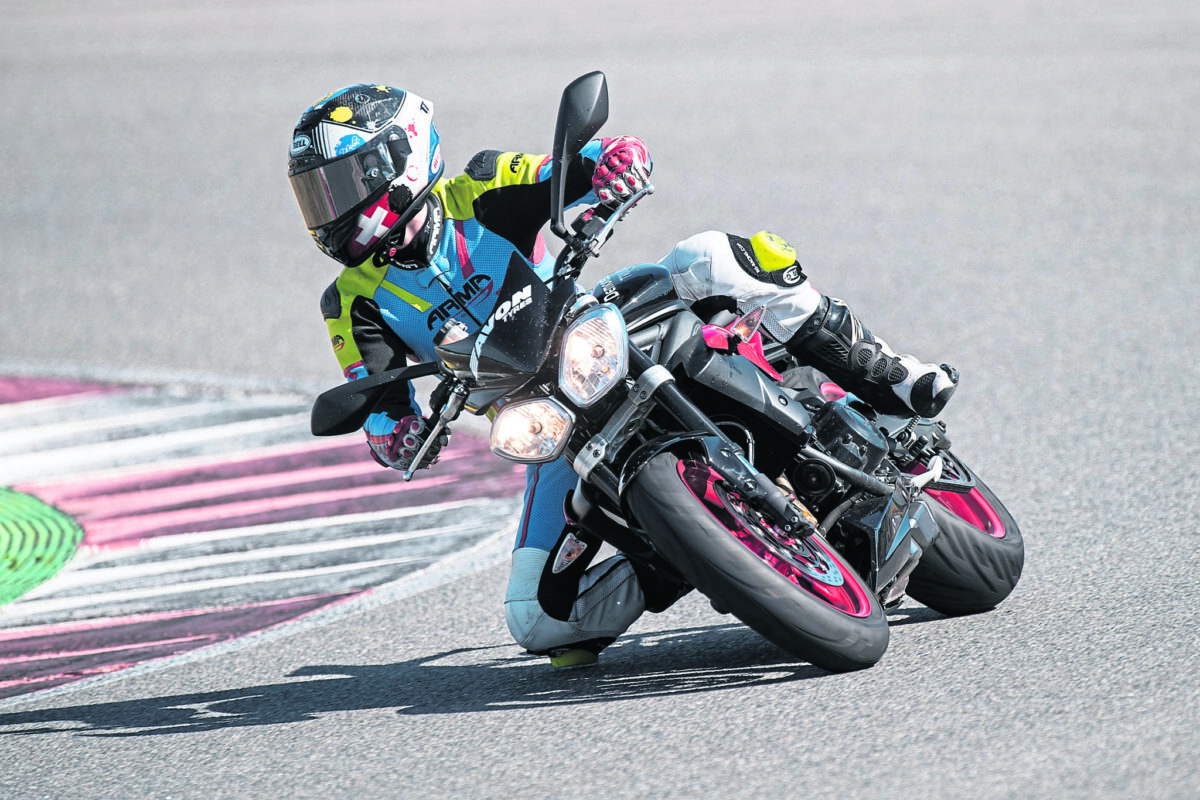 Even though the track temperature is incredibly hot the tyres radiate heat incredibly quickly, meaning you really can start pushing on rather rapidly, and they handle the Street Triple with ease; aiming at apexes like they’re going out of fashion. As confidence spiralled it was time to give the Spirit STs some welly, and it really didn’t take long to find their limits; especially on the bigger bikes like the Superduke and Z100SX. With the traction control disabled (it’s only fair on a tyre launch!) you really do get a feel for the rear, which does tend to brake traction fairly easily when ploughed with heaps of power, while the front does seem to feel quite stiff when you have some good brakes pumping on the pressure.
Even with the softer compounds on the edge the Spirit STs don’t offer monumental amounts of feedback, but when you remember that they’re a touring tyre they do a pretty good job nonetheless. Think of them as a tyre you could ride to a trackday and have a craic in the intermediate group with, but on a proper high performance bike a track thrash might be a bit of a stretch.
It’s not fair to judge the Spirit ST quite so harshly on track though, and as the range of bikes suggest it isn’t a tyre intended for track use – but is capable of running some solid speed, for a bucket load of miles in every condition.
For that the Spirit ST does an incredible job; okay you won’t see them plastered around racetracks but for wet feel, longevity and value for money (they should come in under £270 a set) they are a solid option for those long range hooning sessions. 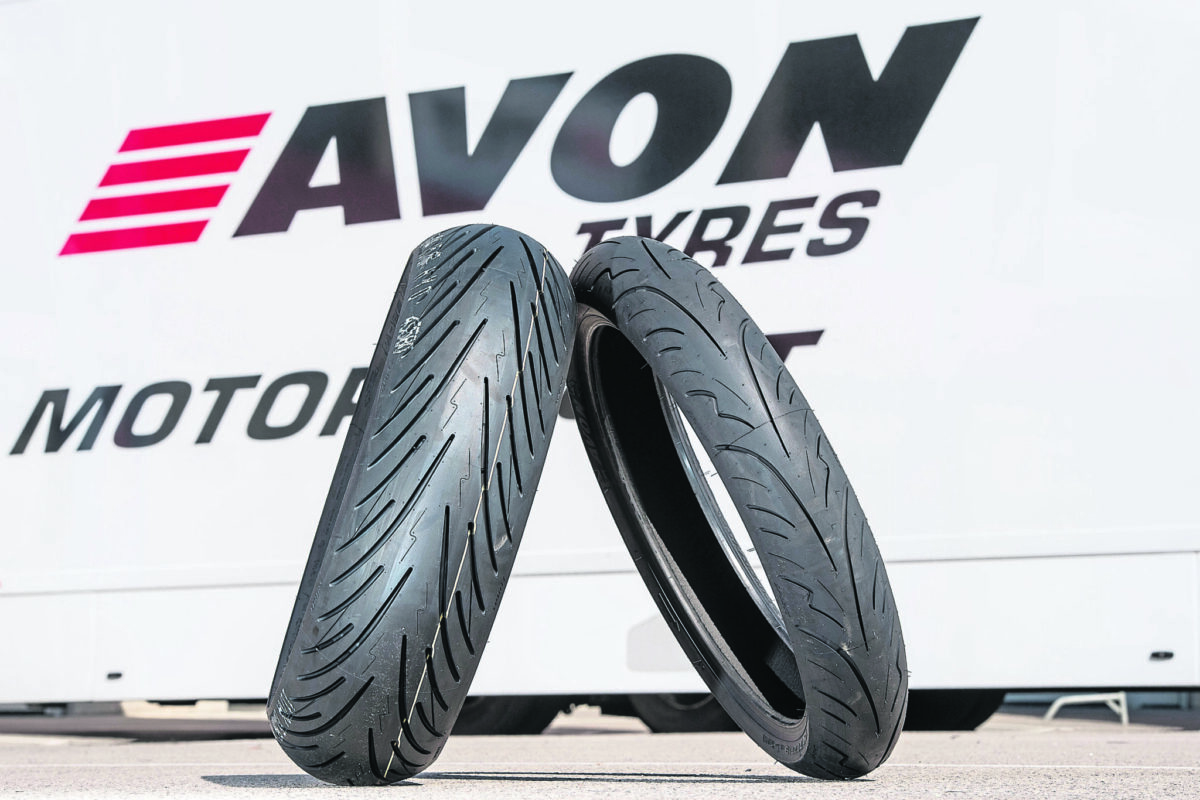 ATAC-TA – Advanced Tread Arc Combination – Tri Arc = Varies the tread profile across the tyre for the ultimate in handling and stability.
LPE – Lifetime Profile Engineering = Works in conjunction with ATAC to produce a tyre profile and footprint which even when worn, gives consistent handling and stability for the full life of tyre.
ES System – Enhanced Stability System = Carcass, sidewall and tread are designed to work in harmony so that the stresses absorbed are distributed evenly. This reduces localised flexing within the tyre’s structure.
RF – Reactive Footprint = Reactive footprint technology marries Avon’s unique ATAC, ES & LPE systems to produce a footprint which changes size and shape depending on the bike’s lean angle for the full life of the tyre. The result is a contact patch which increases as the bike leans. 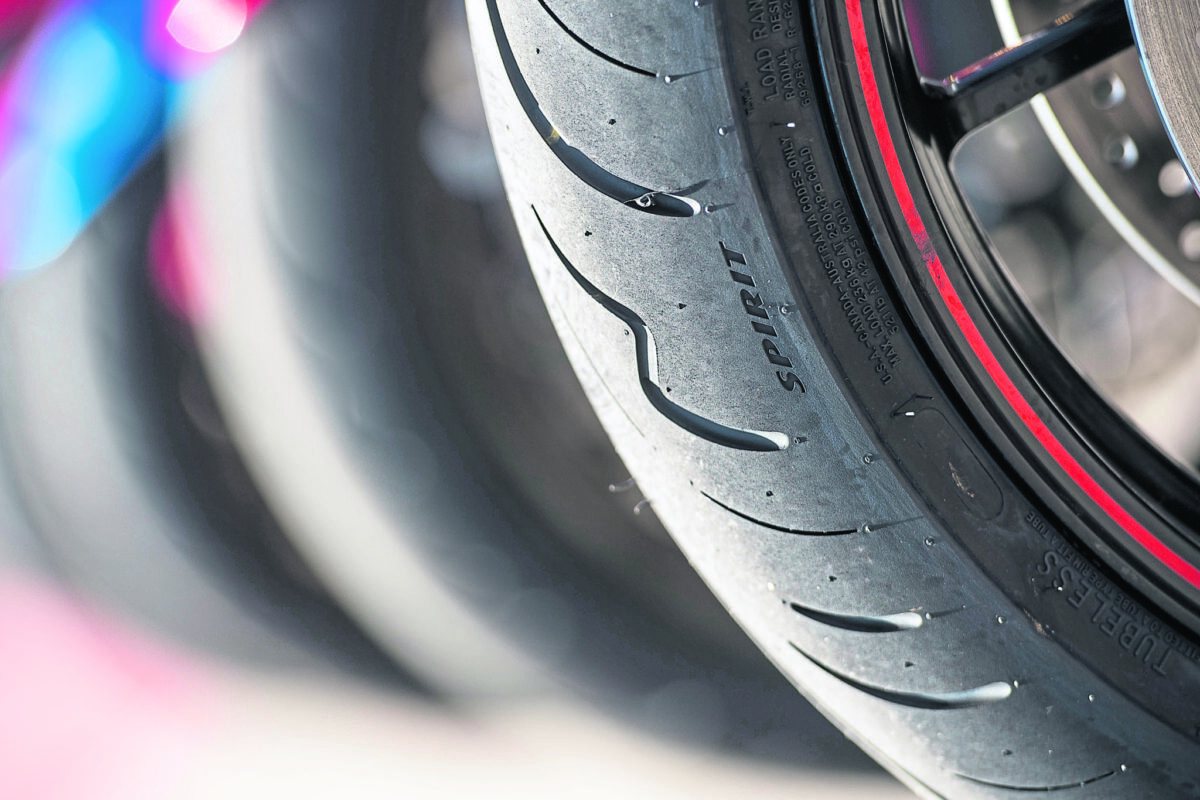