Our German cousins Motorrad magazine joined forces with Kardesign to create a selection of CGI designs to showcase the hotly anticipated Ducati V4. 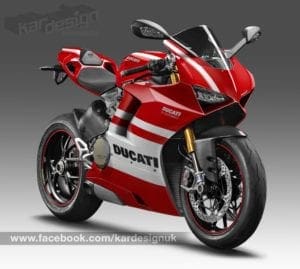 The V4 will replace the current L-twin Panigale both in the showroom and on the WSBK circuit for 2019 – and has been caught out during testing multiple times over the last few weeks. The digital renderings have been created using those spy shots, which initially show a bike that looks much the same as the standard Panigale L-twin – but on closer inspection they reveal a much changed machine.

Looks wise, the new Ducati V4 features a new sharper fairing and a reshaped and simplified headlight area. The front forks appear to be standard Panigale components (as featured on the outgoing model), while the rear shock has been re-positioned in a more conventional slot behind the rear cylinders. The rear bank of cylinders show that the engine has been angled backwards, creating more of a v-configuration than the usual L-twin setup where the front cylinder are canted forwards. 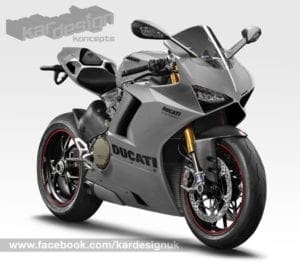 Admittedly, It is still unclear if the outgoing Panigale’s monocoque frame will remain or has been replaced by a trellis frame on the V4. The latest Panigale is set to be unveiled officially at the 2017 EICMA show – but we’re expecting much of the technical specifications to be clarified before the motorcycle industry showcase in November.