Honda is hard at work developing its new Africa Twin Rally, a lightweight, off road version of its Africa Twin – and Spidi have released some footage of the off-road animal in action as part of its latest campaign.

With talk of the upcoming Yamaha XT700Z Ténéré Rally arriving in road and rally versions in the not too distant future, Honda is also working on development and commercialisation of the Honda Africa Twin Rally – its even more off-road oriented adventure machine.

At EICMA in 2015, Honda confirmed the resurrection of its iconic Africa Twin, presenting a concept bike similar in style to the upcoming Rally model. But, that wasn’t the bike that made it to market first – the current incarnation is a heavier, faired, road oriented mile-muncher. 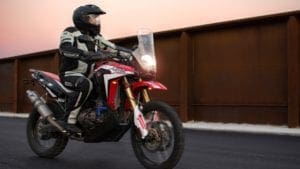 The Honda Africa Twin Rally promises to build on the solid foundations of the current Africa Twin, stripping back the adventure machine to create an off road monster with two main differences: more power and less weight.

The new Rally model will offer 5bhp more and weigh in 7kg lighter than the standard model. That means that the Rally will have around 100bhp for its 200kg weight – on a longer suspension. It’ll also feature 21” and 18 “wheels, an MX-inspired fender and a Dakar style screen. 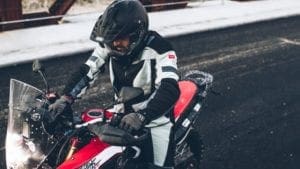 Honda haven’t confirmed when the Rally will make it to market – but with a finished version making an appearance in Spidi’s promotional video, the Africa Twin Rally can’t be far away.