dguard, an innovative new product from German company digades is the world’s first eCall system for motorcycles. It can automatically detect a crash and quickly contact the emergency services – and it’ll let you know if your bikes on the move without your presence too. Sounds amazing, right?

*In the last issue of MCM we reported that fitting was included when purchasing the the module. That’s not the case – the specifics of fitting the dguard are complicated, changing from bike to bike, and as a consequence fitting fees are adjusted accordingly. Out of interest, it costs £499 for the unit, and an average of £50 for fitting.

If you’ve not heard of eCall technology before – it’s a European initiative that aims to bring rapid assistance to motorists involved in collisions anywhere in the EU. In fact, an eCall system will be mandatory on all new European cars and light vans from 1 April, 2018, but there is no such legal requirement for motorcycles as yet.

The dguard eCall system utilises sophisticated sensor technology to detect a crash and contact the emergency services in a matter of seconds. The sensor is a sophisticated bit of kit and works a bit like a magnetic field, detecting a riders presence, or lack of it, on the bike. The emergency services are given an automated spoken message, with the GPS coordinates of the accident. If the injured rider is wearing a Bluetooth headset and is able to speak, then the dguard will connect the emergency call directly.

There’s a Deutsch Mobile Sim built into the module – on a roaming data contract, so it’ll connect to whichever provider is offering the strongest signal (which should minimise the risk of being caught out in a dead spot, without signal). It functions throughout Europe, with the exception of the Netherlands – due to a law which does not currently permit automated calls to be made to emergency services, and it’s capable of automatically communicating in 18 individual languages.

It also comes with a handlebar mounted SOS button, which allows a rider to call the emergency services for another person. Importantly, an inadvertently placed emergency call can be stopped within 15 seconds by pressing the button twice (or more).

To ensure that the dguard can reliably distinguish an accident, digades undertook 3 years of research and development – doing over 50,000 miles of testing in multiple countries. The manufacturer also had to ensure that their device would continue to operate even under the most extreme conditions – and undertook crash tests at speeds of 60mph. The unit is housed in an aramid case which is capable of withstanding 300G of force, so digades are confident it’s capable of withstanding a crash at higher speeds too. The module is actually already on the market in Germany – and so far, has a 100% success rate for all incidents detected. 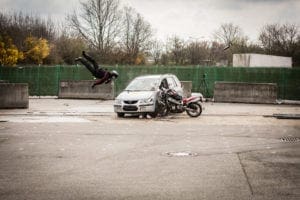 The dguard also features a clever theft warning function, which will warn you if your bike is moved without your presence – and send a message straight to your smartphone. The App will also provide updated GPS data while it’s on the move. 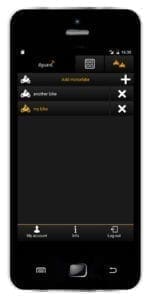 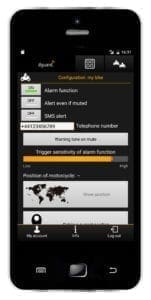 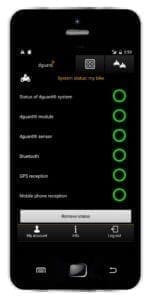 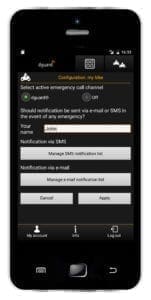 It costs £499 for the unit – plus an additional cost of approximately £50* for fitting. For your money you’ll get a module, a sensor, a button and an app too – which allows full configuration of the system. You’ll also get two years SIM subscription thrown in, after which it’ll cost £29.99 a year (subject to change). So, it isn’t cheap – but it’s not going to be. It sounds like an amazing bit of kit that offers a huge amount of security for both you, and your bike.

*Fitting costs vary slightly depend on the type of motorcycle and location of unit – but should typically cost £50.