Video: The 2017 Motoball European Championships kick off this week!

The 2017 Motoball European Championships kick off this week – with six teams competing for the prestigious title.

Motoball was born in France in the 1930s, going on to become extremely popular in Eastern Europe and Russia – and since 1964, the Motoball European Championships have been held every year. The current champions are Germany, who last year won the trophy ahead of stiff competition from the teams from Russia and France.

The FIM written rules are pretty straightforward: each team fields five players, with everyone on motorcycles (except the goalkeeper, who remains on foot). The aim is to kick the ball (which is 120cm in circumference) into the opposing team’s goal, and the team with the most goals wins. The game is broken into four 20 minute quarters, and at halftime the teams switch ends.

It’s also worth noting that the motorcycles must have a cylinder capacity of more than 250 cc, however, they cannot be longer than 2.20 meters and must have a weight between 70kg and 120 kg dry – though interestingly, electric motors are also allowed. 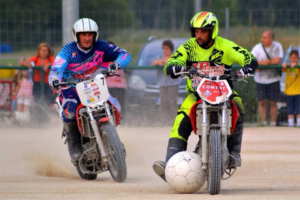 The 2017 Motoball European Championships are taking place in Camaret and Valreas in France, from July 27 to August 1 – with teams from Russia, Holland, Germany, France, Belarus and Ukraine competing for the trophy:

For more information on the Motoball European Championship, click HERE.