British Formula One driver, Lewis Hamilton has expressed his desire to visit Italy’s most famous ranch, the Il Dottore ranch. The three-time Formula One World Champion is a lover of speed, whether on four or two wheels – and on more than one occasion he’s expressed an interest in MotoGP. 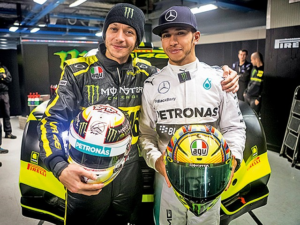 Lewis Hamilton stated in an interview with Channel Four, “I love motorcycles, so I’m sure I’ll spend a few days with Rossi at his ranch and run on dirt track.” Regarding MotoGP, Hamilton said, “I will try to test a MotoGP. Not to compete, because I will not surpass the next promise of 17 or 18 years, but if I can be competitive in training”.

Rossi previously said, “Lewis can come whenever he wants. He was going to come in December last year, but it did not happen. For him, as fast as he is, the doors are always open. ” 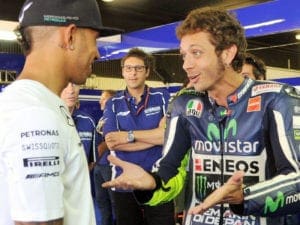 Although the inimitable John Surtees is the only champion in both disciplines, having won seven Motorcycle World Championships (three in the 350cc class and four in 500cc class) and once in F1 driving a Ferrari, there have always been motorcycle riders who have fancied trying their luck with four wheels. Lorenzo has driven the Mercedes W05 which Lewis Hamilton raced to the World Champion in 2017, Rossi has climbed into the competition Ferrari on multiple occasions, and F1 driver Fernando Alonso has tested the MotoGP Honda too.