Guy Martin will join Williams as a mechanic for this weekend’s Belgian Grand Prix at Spa-Francorchamps. 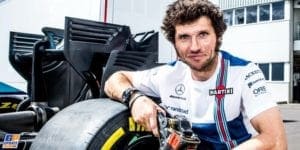 Williams revealed that Martin, who works as a lorry mechanic in between road racing and television appearances, “will be tasked with helping to set up the garage before assisting the car crew build the FW40 car. Guy will proceed to work two 90-minute practice sessions on Friday, a further hour practice session on Saturday before a three-stage qualifying session and then the race itself.”

Martin will be helping to look after both of Williams’ drivers – Felipe Massa and Lance Stroll – and every pitstop is crucial. “Guy will be working with the fastest team in the business, with the team having set the fastest pitstop of the season so far at just 2.02-seconds during the British Grand Prix.”

After the race, Guy will be hanging around with the mechanics, to strip the cars, take down the garage, and pack everything away, ready to be transported to the next race.

Martin’s Belgian Grand Prix experience will be filmed as part of a special feature for Channel 4.