Japanese car-maker, Toyota has shown its serious about reducing forward blind-spots in cars – filing a patent for a clever, cheap solution to help drivers ‘see’ through a car’s A-pillars. Could this spell the end of ‘Sorry Mate I Didn’t See You’ accidents? 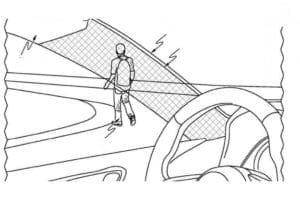 Toyota has filed a patent with the United States Patent and Trademark Office that could help improve car driver’s field of vision, and help to reduce blind-spot related accidents. Its latest innovation is claimed to be a cheap effective solution to help drivers see ‘through’ their car’s front A-pillars – and has been designed to address a growing problem on larger vehicles, which require thicker pillars to stand up to mandatory rollover crash tests.

Unlike Jaguar’s 360 Virtual Urban Windscreen concept (and Land Rover’s Invisible Bonnet — Toyota’s solution does not project images onto the A-pillars. Instead, the Japanese car-maker claims its engineers have solved the problem with carefully placed mirrors that bend light around an object. Cleverly, the new device has been created to be cheaply fitted to all new Toyota models

It’s not yet been confirmed when we might see the new technology on Toyota production models – but it’s a great bit of kit, that should help motorcyclists be better seen at junctions and roundabouts.